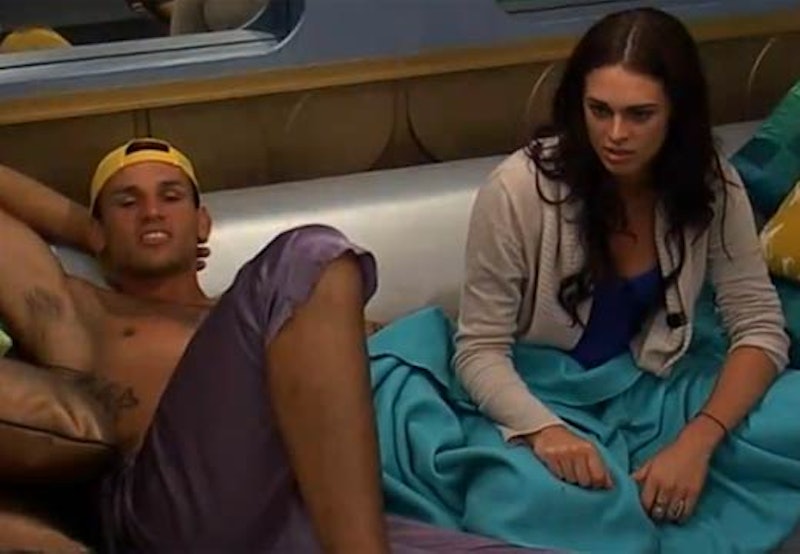 Having never watched Big Brother before, it's difficult to assess whether the number and quality of in-house liaisons this season is more or less than in the past. I mean, recognizing that we're all human, I have to imagine this happens pretty frequently. Right? You're literally trapped in a house with 15 other people, almost all of them uniformly hot. And people have, you know, urges. They have wants. It makes sense that everyone would want to jump into bed with everyone else.

I say "jump into bed" when there's no immediate proof of that, but kissing -- definitely. And that's at least a start. So with that in mind, let's take a look at the two "showmances" caught on camera and offered to us this week: Jeremy & Kaitlyn and Amanda & McCrae.

Kaitlyn is a cute bartender from Minnesota who seems slightly stand-offish. Jeremy is a house boat owner just trying to get in touch with his Native American side, which to him means taking off his shirt whenever possible and hurling epithets at unsuspecting houseguests. Together we just call them "two attractive people who want to smush," or maybe "perfect." It depends on your perspective! Cameras didn't give us a ton on their showmance thus far. We know that: 1) Jeremy's physical strength is such that he can just carry her around 2) They're active people but can be lazy when they're just lounging in the hammock. The rest we just have to speculate on. Is Kaitlin trying to get back at her father? She did address the man directly on camera, telling him "sorry! It's all fun and games." (So there's that.) Does Kaitlin vibe Jeremy as much as Jeremy vibes her? Has she learned yet what a horrific person he is? Does she know, and is she as bad a person herself?

Mutual vibage being crucial to any sort of relationship -- even/especially a summer fling in a reality show prison -- I can't say for sure just where JKat, or Kaitremy sits on the spectrum of relationship quality. There are just so many questions to answer! Of course the rate this season has been going on racist remarks alone, I think we'll be able to make a far stronger assessment even next week.

"Who could have predicted the weirdo pizza boy and the fake-breasted Miami real estate agent?" is not a sentence you could have told me I'd be writing in July 2013, but here we are. Without much preamble, Amanda hops into bed with a clearly freaked McCrae. Which he corroborates: "To be honest? I'm scared. She's a man-eater." And this was before Amanda proceeded to take off her shirt, and talk about her breasts. "You can't stop looking at them, can you?" Not when you're calling attention to them both verbally and visually, Amanda! Anyway, inevitability overcome awkwardness as the two proceeded to start making out, wonderfully, in their shared bed. It was sort of sweet in a totally weird way? Amanda seems convinced that McCrae is a secret genius, which really turns her on; McCrae, for his part, is just happy to have a lady do all the work. I'm excited for these guys!

More like this
Scott Disick’s First Time Around Kravis Was “Awkward,” To Say The Least
By Jake Viswanath
Kim Kardashian Joked That Her Wedding To Kris Humphries Was A “Gay Wedding”
By Jake Viswanath
Kourtney Kardashian Broke Her Engagement Ring & Cried In Her Closet For Hours
By Jake Viswanath
Michelle Williams Reveals Sweet Way Jeremy Strong Helped After Heath Ledger Died
By Nola Ojomu
Get Even More From Bustle — Sign Up For The Newsletter