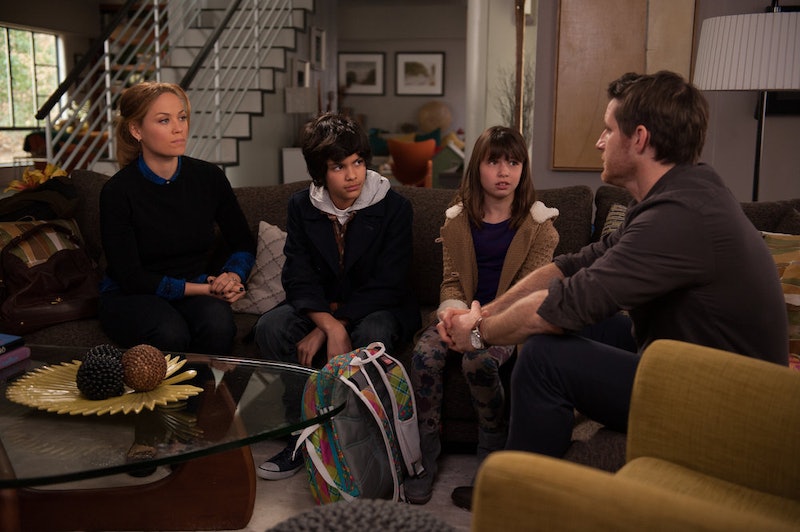 Hey guys, Parenthood didn't depress me nearly as much this week! I mean, don't get me wrong, those Joel and Julia scenes were still rough, but not, like, throw yourself off a cliff rough — more like squeezing a lemon in an open wound rough. Progress!

This episode, overall, was a lot less about the bubbling tensions that have been stirred around all season, and more about actual decisions that will push us forward into this season's latter half and perhaps even next season. We didn't get any Amber or Drew, which was a bit of a bummer, but people got shuffled around, new goals cropped up, and overall it seemed like something new, even as the episode dealt with the old. So let's explore what we did get, shall we?

Zeek takes a big step: He tells Camille that he sees that she hadn't really come all the way back from Italy emotionally because she's still craving that adventure, and he tells her that he'd rather follow her on that adventure than get stuck in that cavernous house all by himself again without her.

It was a necessary conversation about compromises. And so they're putting their house on the market. It's a supremely beautiful property that I love vicariously living in every week, though, so here's hoping someone in the family magically swoops in and buys it. Maybe Crosby and Jasmine, somehow? Not realistic, but that'd be nice.

Or hell, maybe the people in this next section could make use of it in their next venture...

Even throughout her mayoral campaign this season, Kristina's felt a little wander-y: After cancer, she wanted her life to have meaning and focus and a definition that did not revolve around being ill or being a mom, and though the mayoral campaign itself stretched at the boundaries of realism within this show, it did serve to open her up to the future of not only her life but her career as well, even when she didn't really realize it was happening.

In other words: Ever since Kristina gave that woman her phone number during the campaign, she's been helping other parents of kids with disabilities to navigate the system and the red tape that her and Adam had to go through all their own. She's found her calling.

This intersects rather perfectly with Max's recent struggles in school, which leave him shuttled off when the realities of his disability mean more disruption than a public school's got the resources to deal with. But Max's high-functioning nature means he needs something other than the school where the kids with more severe disabilities go."Where do you go when there's nowhere in the system that fits your kid?" Kristina asks, looking at all the Berkeley schools and all the beaurocratic bullshit they've had to put up with since Max got his diagnosis all those years ago. And then it strikes her: Start your own school. And suddenly Kristina has a new path, and we have a journey that I don't think's really been done on TV before. We learned through the character of Tami Taylor on Friday Night Lights that Jason Katims is ace at depicting characters heavily invested in certain segments of the educational system — and the ways in which the system they have to work within can beat them down. Luckily for us, these women have a way of rising above it, if only because they're on television. And they've got me curious about what this new path will be.

Seeing Sarah artistically fulfilled has always been a special joy on this show, and one that the series exploits far too infrequently.

And so it is that Sarah, even through Hank's bullying, finds a way to assert herself and do the photography for her new account the way she pictured. And it's great, because when Sarah is happy with her work, she is suddenly fulfilled in her life in a way that we don't get when we're just recycling her same romantic stories over and over. Remember when Mark told her that the play she'd written was the real deal? That's the Sarah I want to see finding herself week after week.

Jasmine and Crosby have mold, and so it's to a motel that they go. Alas, hotels cost money, and so in the end, it's back to the parents' house that they go.

Honestly, though this storyline provided some comic relief to the episode — just Dax Shepard shuffling around resistant to an idea is enough for comic relief — the whole thing really can just be boiled down to those two lines up there. That's because this episode was very much a shuffling for them, and setting them up for what's sure to be some interesting dynamics with Crosby and his wife and children living under the same roof (or maybe in the guest house) as the Braverman parents in much the same way that Sarah was with Amber and Drew in the beginning.

Still ending with these two. As I said above, despite the fact that this episode was The One Where Joel Moved Out, this episode seemed somehow less apocalyptic for the two of them than the past zillion have been. Perhaps that's because it seems we've finally left behind Angry Joel? And thank god, because I have been mad at that guy for far too long.

No, Joel this episode seemed more conflicted; resigned that this is the step he needs to take right now for his own peace of mind, but more respectful of Julia. It admittedly wasn't a shining moment of hope when the marriage counselor asked if this was a divorce or a separation and Julia piped in immediately with the latter while Joel offered an " ...I don't know," but hey, at least it was a confused "I don't know." Hell, he even apologized to her later in the episode that this is where he is right now.

And yes, he did move out, and watching them struggle to and eventually succeed in telling their kids was classic Parenthood heart-wrenching moment which was made even more so when Julia takes herself and her kids to her parents late at night because she "needed to come home." This segment of the Braverman clan is still undeniably lost. But hey, at least it seems like they might find a compass soon.

Parenthood doesn't come back until Feb.27, which bums me out, but them's the breaks. Contemplate marriage in your own time until then, I guess?

More like this
What’s New On Netflix: A Victoria Justice Rom-Com & The Return Of David Letterman
By Arya Roshanian
Selena Gomez’s ‘SNL’ Hosting Debut Had Twitter Gushing Over ‘Barney’ & Wigs
By Stephanie Topacio Long
'Bridgerton' Star Nicola Coughlan Confirms Season 3 Will Focus On Colin & Penelope
By Grace Wehniainen and Alyssa Lapid
'Bridgerton' Season 4 Will Likely Focus On This Brother's Divided Heart
By Grace Wehniainen and Alyssa Lapid
Get Even More From Bustle — Sign Up For The Newsletter