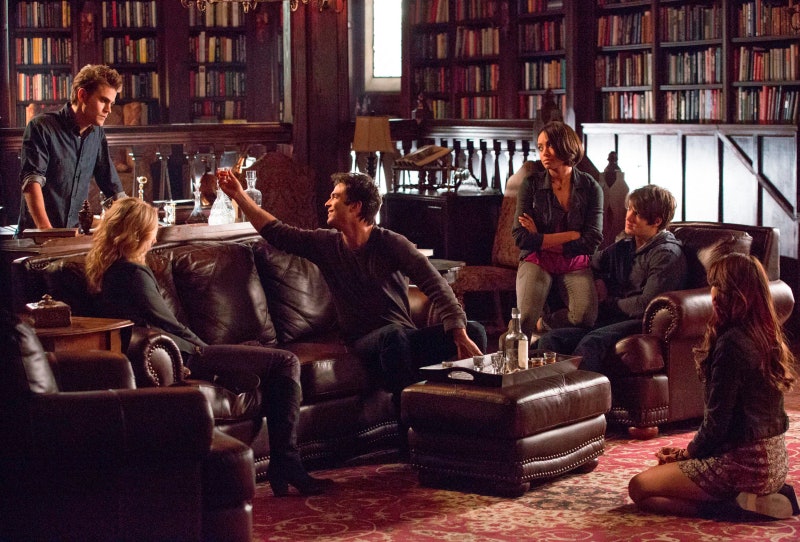 The Vampire Diaries returned from its winter hiatus tonight with an explosive 100th episode. It had to be explosive; there was too much build up for it to be anything else. Just as a reminder, when we left off, Katherine Pierce was human dying, aging rapidly to make up for the hundreds of years of immortality as a vampire. Oh, and Damon dumped Elena and the world was basically crashing down around TVD fans everywhere. After all of the hype, it would be so easy for the 100th episode to fall short of our expectations, but it did not. Here are the seven biggest fangirl squeal-inducing moments of the episode. Some of them represent squeals of delight, some of surprise and some of "no, no, no PLEASE NOT THAT," but they all contributed to the emotional roller coaster of TVD.

1. KLAUS AND CAROLINE DID IT.

After years of build up and glorious sexual tension, Caroline and Klaus finally consummated their non-relationship. How did he finally talk her into it? By promising to never return to Mystic Falls and to leave her alone forever if she would just admit how she felt. She admitted how she felt. Hard. In the forest. Probably several times. This cannot really be the end of their story.

Okay, this might seem like the most important moment of the episode (it happens at the very end, naturally), but anyone who cares about the Klaus/Caroline relationship knows that was the real squeal moment. With that out of the way, though, it's huge that Katherine has body jumped into Elena's bod. She was on death's door, but her daughter found a way to help her shift bodies. It's a great twist and even though it's not clear yet if Elena can speak through her body too or not, but who cares? Katherine is amazing.

3. Stefan told Damon to get Elena back.

Of course, if he tries, he'll kind of be getting Katherine back, but still, what a big moment for the Salvatore brothers. Is Stefan really done with Elena for good? Or is this one of those "she needs to deny him to really choose me" kind of tests?

Of course, now that Caroline and Klaus have finally gotten it on, Tyler returns to Mystic Falls. JUST AS CAROLINE WAS MOVING ON. My guess is that their relationship can never be the same now that she's had a real taste of the dark side.

The nice thing about Bonnie's new role as the new Anchor is that it's a great excuse to bring back TVD's many (many, many) deceased favorites. This we saw cameos from Vicki and (WAIT FOR IT) Alaric. Yes: Alaric. Alaric is easily the character I miss the most and any appearance of his is a treat, even if it's just to whisper a simple "cheers" to Damon.