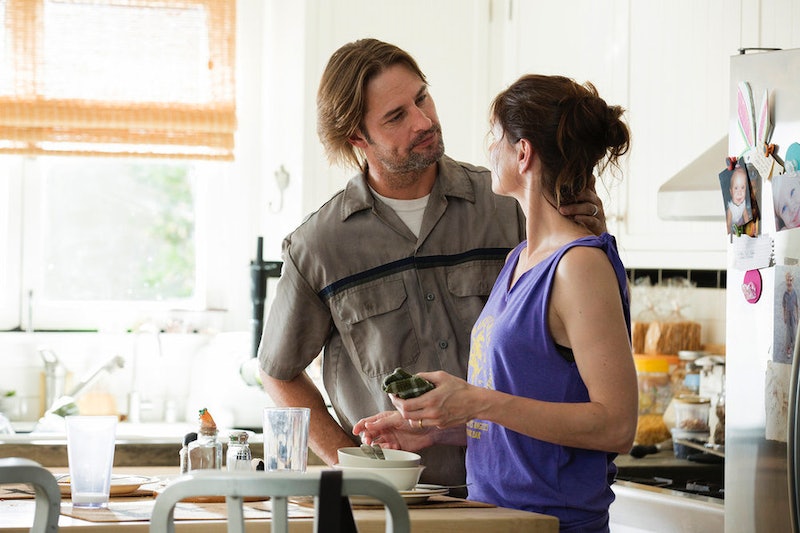 Did the premiere of USA's sci-fi drama Colony grab your attention? The slick, tense pilot, which aired Thursday evening, threw a lot of story at me, straight off the bat. There are two kinds of high-concept TV shows: the ones that establish self-sustaining intrigue that stokes the continued fervor of their fanbase (Lost, incidentally a credit of Colony co-showrunner Carlton Cuse) and the ones that overload the narrative and exhaust their viewers. I don't know which kind of show Colony is yet; it's not fair to pass judgment solely based on a pilot. But if I were to do that with the first full episode of the Josh Holloway and Sarah Wayne Callies series, I'd say that it's on the right track. With some stipulations.

Colony is set in and around Los Angeles, in what's basically the present. The difference between real L.A. and Colony L.A., however, is that Colony L.A. has been invaded. The pilot joins main protagonists Will and Kate Bowman (Holloway and Callies) on an average morning of the occupation. They kiss their kids, feed the dog, and do the morning kitchen dance of the busy, in-love parents. Outside their door, the wholesome orange juice commercial vibe crumbles. Yards are protected by barbed wire, while armed guardsman and people who look like your friends and neighbors speak to each other in code and trade goods through some kind of barter system.

To the outside world, the Bowmans are the Sullivans. They're undercover because Will is some kind of ex-operative, government-type killing machine (but he only does it when he must, because he's the good guy). That's not the type of information you'd want broadcast to militarized oppressors of unknown origin, so Will works as mild-mannered (yet suspiciously rugged) mechanic. But there's obviously more to the life of the Bowman-Sullivans than keeping their heads down. Kate seems to have a network of allies she visits before curfew descends on "the block." And Will is determined to find and retrieve another one of their children, who they were separated from when the "hosts" took possession of the city.

Colony has been talked about as an "alien" invasion series, but there's no sign of extra-terrestrial life in the pilot, aside from an explosion that doesn't look engineered by humans. The occupiers are represented by actual men: the aforementioned arm guards, and Proxy Snyder, a smarmy type who sips unlimited champagne and coffee as a willing collaborator while the rest of the city scrambles for food and medicine. He becomes aware of Will's past and recruits him, holding his son's return out as a carrot. Snyder's concern and the concern of his bosses (who or whatever they are) is to crush the growing "resistance," aka Kate's code-speaking friends. This is what's known as a conflict of interest.

The Bowmans are playing with fire now, and this is where Colony can get really good. With Will aligning with the "hosts," Kate can feed valuable information to the "resistance." Or, she could inadvertently expose their activities and get them killed. So far, Colony is succeeding in bringing fear right to the audiences' doorstep. The show wants to know: if this were happening in your city right now, what would you do?