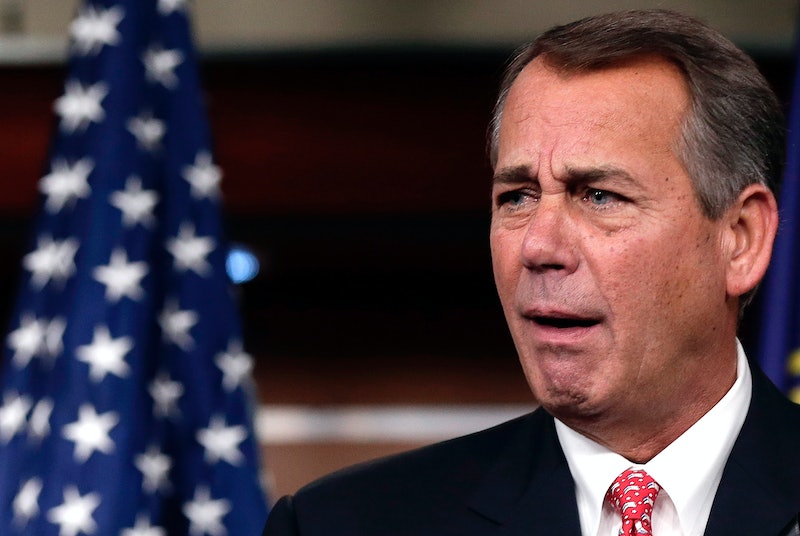 Who knew that House Speaker John Boehner was so dedicated to the simple life? On Thursday, Boehner told Jay Leno that he won't run for president in 2016. And why? Well, because wine, golf, cigarettes, and, um, the smell of freshly-cut grass are too good to give up, that's why.

Leno, who has been trying to get Boehner on the show for years, asked the House Speaker whether he was considering a presidential run, to which Boehner responded rather emphatically. The exchange went like this:

Boehner added: "Listen, I like to play golf. I like to cut my own grass. You know, I do drink red wine, I smoke cigarettes and I'm not giving that up to be president of the United States."

Everyone in the audience cheered at his response, which is one of those awkward reactions you don't want to think too much about if you're the one they're applauding.

"It's hard running for office when people can't say your name," Boehner added later. "You know, my name looks like Beener, Bonner, Boner. My first race for Congress, I was running against a guy named Pinis. But thank God my name wasn't Weiner."

We wouldn't have guessed Boehner to be a funny guy, but who doesn't love a good genitalia joke?

Leno also asked Boehner about Vladimir Putin (a "thug"), Edward Snowden (a "traitor"), the NSA ("may have made some mistakes...") as well as the Republican's little problem of infighting. To that, Boehner admitted that their squabbles were the "worst he's seen" — but quickly added that the arguments are only about tactics, not end goals. Reassuring!

At least Boehner handled the potentially awkward questions with grace, maybe thanks to some pre-appearance prep: He Tweeted Rob Lowe to ask him for any advice. Lowe, who's been on the show a half-dozen times, didn't Tweet back. Some might call the diminishing effect on the speaker's ego a little bit of a ... nah, that's too easy.