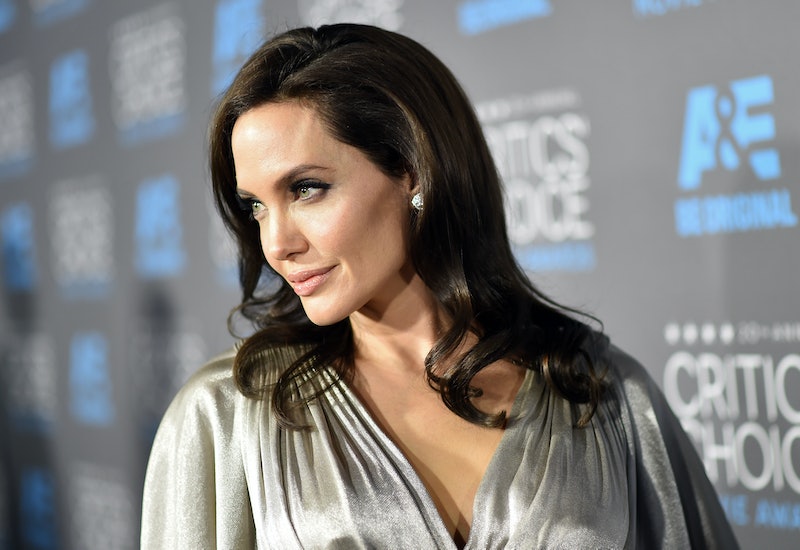 The beautiful thing about celebrity interviews is that despite prep from their publicists, they often tend to go waaaay off the cuff and say things that make us scratch our heads in confusion. Celebrities are typically groomed to be perfectly professional and go into interviews with their coaching in mind, but the truth is, they're only human, which means they sometimes give too much information about certain topics, such as their sex lives. Yep, in a world where it's easy to feel innately connected to our favorite celebrities (thanks to Twitter and Instagram), sometimes celebrities go way TMI and say some pretty creepy things about sex.

We've all been there. You're at a dinner party, or other group gathering, and you say something intending to be witty or cool and end up majorly embarrassing yourself. For a normal person, this results in a very red face and a little bit of quick recovery, but for celebrities, it means millions of people end up judging them based on their uncomfortable revelations. In some cases, the celebrity likely knows the implications of what they're saying, thinking the world really does want to know what they do behind closed doors. And that's where it gets really, really weird.

Wilmer Valderrama has been linked to a slew of famous ladies in his time, from current girlfriend Demi Lovato to Mandy Moore and Jennifer Love Hewitt. In 2006, he revealed plenty of info about his escapades to Howard Stern, claiming that Moore lost her virginity to him and that the sex was "really good" but "not like warm apple pie." OK...

Kristen Stewart gave a charming interview to Vogue UK right before her breakup from Twilight co-star Robert Pattinson in 2012, in which she was quoted as saying:

My God, I'm so in love with my boyfriend. I wish he were here now. I think I want to have his babies. God, I miss him. I love the way he smells. And him me. Like, he loves to lick under my armpits. I don't get this obsession with washing the smell off. That smell of someone you love. Don't you think it's the whole point?

Thanks for sharing, Kristen.

In 2012, Kesha told Ryan Seacrest that her song "Supernatural" was inspired by having sex with a ghost. Weirdly, she's not the first celebrity to admit to romantic encounters with the supernatural kind. Shudder.

In 2010, Playboy asked John Mayer about his relationship with Jessica Simpson. Mayer, ever the sensitive romantic, had this to say: "That girl, for me, is a drug. And drugs aren’t good for you if you do lots of them. Yeah, that girl is like crack cocaine to me ... Sexually it was crazy. That’s all I’ll say. It was like napalm, sexual napalm." Nice.

Back in 1999, Lucy Liu told Us Weekly that she had a sexual encounter with something less-than-alive. Liu said, "Some sort of spirit came down from God knows where and made love to me... It was sheer bliss. l felt everything. I climaxed. And then he floated away. It was almost like what might have happened to Mary. That’s how it felt. Something came down and touched me, and now it watches over me." Umm, what?!

In 2004, the late Anna Nicole Smith also waxed poetic about her numerous encounters with a ghost, telling FHM:

A ghost would crawl up my leg and have sex with me at an apartment a long time ago in Texas. I used to think it was my boyfriend, and one day I woke up and it wasn’t. It was, like, a spirit and it — woo! [miming a ghost flying from her her bedsheets] — went up! I was freaked out about it, but then I was, like, "Well, you know what? He’s never hurt me and he just gave me some amazing sex so I have no problem."

The interviewer mused that it might have been a dream, and she responded,

It was not a dream because it was happening every night. One night at almost daylight — and that was the time my boyfriend went to work — I had woken up ‘cause I felt it comin’ up my leg and I saw it. I told my boyfriend and he didn’t believe me. Of course. MEN!

7. Visions Of The Past

In 2012, Jane Fonda dished to Hello! magazine about the fact that her sex life hasn't slowed down as she has aged, which wouldn't be creepy at all... until she added this part: "The only thing I have never known is true intimacy with a man. I absolutely wanted to discover that before dying. It has happened with Richard, I feel totally secure with him. Often, when we make love, I see him as he was 30 years ago."

8. In The Heat Of The Moment

Angelina Jolie has always been open about her sexuality, but her comment about losing her virginity at age 14 takes the cake. She told OK! Magazine ,

In a moment of wanting to feel close to him, I grabbed a knife and cut him. He cut me back ... We had an exchange of something and we were covered in blood, my heart was racing. Then whenever I felt trapped, I’d cut myself. I have a lot of scars. It was an age when I felt adventurous and after a few beers things happened.

This is the same person who wore a vial of her husband's blood around her neck, so I guess in context, it's all relative.

Celebrities, can you just do us a favor and maybe keep your bedroom habits between the sheets? We love you, but some of these are just too spooky to handle.

More like this
I'm 42 & I've Never Had Sex. Is It Too Late?
By Sophia Benoit
Long Live Bennifer!
By Allie Jones
Harry Styles Opened Up About Olivia Wilde With A Rare Comment About "Trust"
By Sophie McEvoy
Are Gemini & Capricorn Compatible In A Relationship?
By Kristine Fellizar
Get Even More From Bustle — Sign Up For The Newsletter