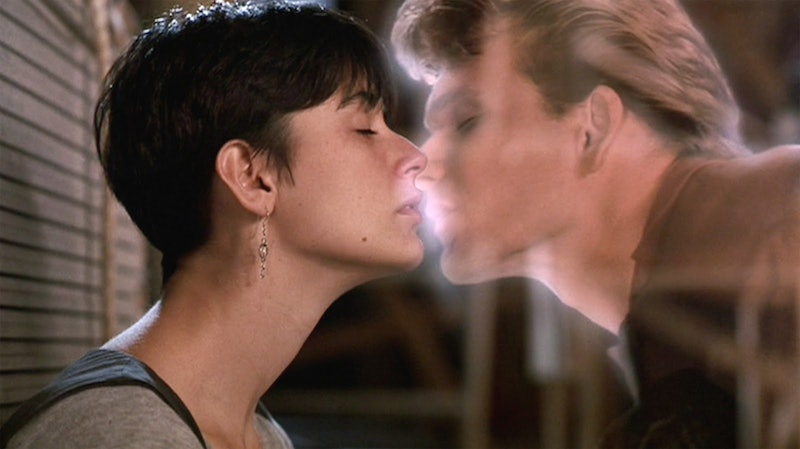 Admit it: you have wondered about people who have sex with ghosts ever since you saw that movie Ghost (or, at the very least, that episode of Charmed where Alyssa Milano fell in love with a ghost). In honor of Halloween, you're about to finally get some answers, from the most believable and trustworthy people in the world— celebrities! Because people, we are living in the golden era of the celebrity ghost sex story.

Though commoners have been reporting ghostly sexual encounters (a phenomenon known as "spectrophilia") since at least the 13th century — a time when Catholic theologian Thomas Aquinas believed that demons lived in our world and frequently seduced humans — the past 15 or so years have seen a boom in celebrity ghost sex stories of unprecedented proportions. Stars! They really are just like us! (well, those of us who have sex with ghosts, anyway).

So what's the deal with all these ghostly sexual encounters that celebs are reportedly experiencing? Is it a side effect of the stress of fame? Does it have something to do with all the juice fasts they're presumably doing? Scientists have come up with a much more straight-forward explanation: sleep. Many scientists believe that reports of ghost sex encounters are actually hypnagogic hallucinations — hallucinations that occur while the body is falling asleep. They can also be a product of sleep paralysis, a sleep disorder that can leave sufferers hallucinating and unable to move, with a feeling of pressure on their chest.

But good luck trying to propose that as a solution to any of the spectre-sexuals below. All seven of these celebrities swear that they were awake, lucid, and fully aware during their encounters. Is ghost sex real? Is it fun? Is it less frustrating than online dating? Read on, and decide for yourself.

The Elementary star and erstwhile Charlie's Angel told Us Weekly in 1999 that she had a sexual encounter with a ghost while trying to nap on her futon. “Some sort of spirit came down from God knows where and made love to me," said the actress, who, quite frankly, always struck me as being a little too well-balanced for this sort of thing. “It was sheer bliss. I felt everything. I climaxed. And then he floated away. It was almost like what might have happened to Mary. That’s how it felt. Something came down and touched me, and now it watches over me.”

In 2004, model and...let's say "reality TV pioneer" Smith told men's magazine FHM that she had repeatedly hooked up with a ghost: "A ghost would crawl up my leg and have sex with me at an apartment a long time ago in Texas. I used to think it was my boyfriend, and one day I woke up and it wasn’t. It was, like, a spirit and it — woo! [miming a ghost flying from her her bedsheets] — went up! I was freaked out about it, but then I was, like, 'Well, you know what? He’s never hurt me and he just gave me some amazing sex so I have no problem.'" After the interviewer wondered if it could have just been a dream, Smith protested that "[i]t was not a dream because it was happening every night...I told my boyfriend and he didn’t believe me. Of course….MEN!"

Though comedy legend/true blue paranormal believer/ spooky vodka salesman Aykroyd's tale is a lot tamer than the others here, he bears the unique distinction of being the only male celebrity to admit to even engaging in light foreplay with the undead. Is this the last taboo? Come on, guys! You're not any less manly if you admit to receiving a demonic blowjibber! In a 2010 blog post for The Huffington Post, Aykroyd coyly admitted that he'd "felt an unseen presence... [i]n my bed no less when we lived in Mama Cass's Hollywood estate," and in a 2013 interview with Esquire, he reported cuddling with a male ghost in his bed and thinking "I'm just going to roll over and snuggle up next to it.'"

Actress De La Huerta — who has starred on TV shows like Boardwalk Empire and movies like Enter the Void, but who you probably know as "the drunk woman who stumbles around in the Lana Del Ray's 'Video Games' video" — told the New York Times in 2011 that she got it on with the ghost of Elvis on a visit to Graceland. "I went to his recording studio because sometimes the sensitive people feel him in this room, and I stood in this corner and I felt him. What can I say? I felt him touch me," she told the paper of record, presumably with a completely straight face. "I felt his spirit go through me and give me pleasure."

Pop star/ body glitter innovator Ke$ha joined the American Academy of Ghost Boners in 2012, when she claimed, during an appearance on Ryan Seacrest's radio show, that her song "Supernatural" was inspired by "having sexy time with a ghost." Ke$ha further hammered the point home during an appearance on Conan the same year, proclaiming that she "went to the bone zone" with a ghost; one year later, she reported on Jimmy Kimmel Live! that her vagina was "haunted." Me too, girl. Me. Too.

Of course, not all sexual encounters with ghosts are of the fun, free-wheeling, Haunted Mansion-meets-Playboy Mansion variety described above. In 2012, Ice-T's better half, Coco, claimed on the talk show Naughty But Nice that a "perverted ghost" groped her. "I was watching TV...and I was wearing a nightie and I felt my dress move up my leg... I looked down and got freaked out. I pushed it down, watched TV, felt it again and I could see it being pulled up. And then I felt a guy breathing in my ear." Austin also claimed that ghosts haven't bothered her since her marriage to Ice-T, presumably because they are more into the original Law & Order, and think the spin-offs are kind of weak.

Yes, it is extremely tough to believe the ghost-sexual stories of someone whose whole claim to fame is appearing in a Paranormal Activity sequel, but let's give it a try, anyway. In April 2014, actress Blasick appeared on the British talk show This Morning, describing two separate sexual encounters with a ghost . “At first I was very confused... then I decided to relax and it was really pleasurable, I really enjoyed it,” Blasick noted, adding that “[a]s a child I always wanted to know if there was something more to this world. This [experience] did answer some questions for me.”