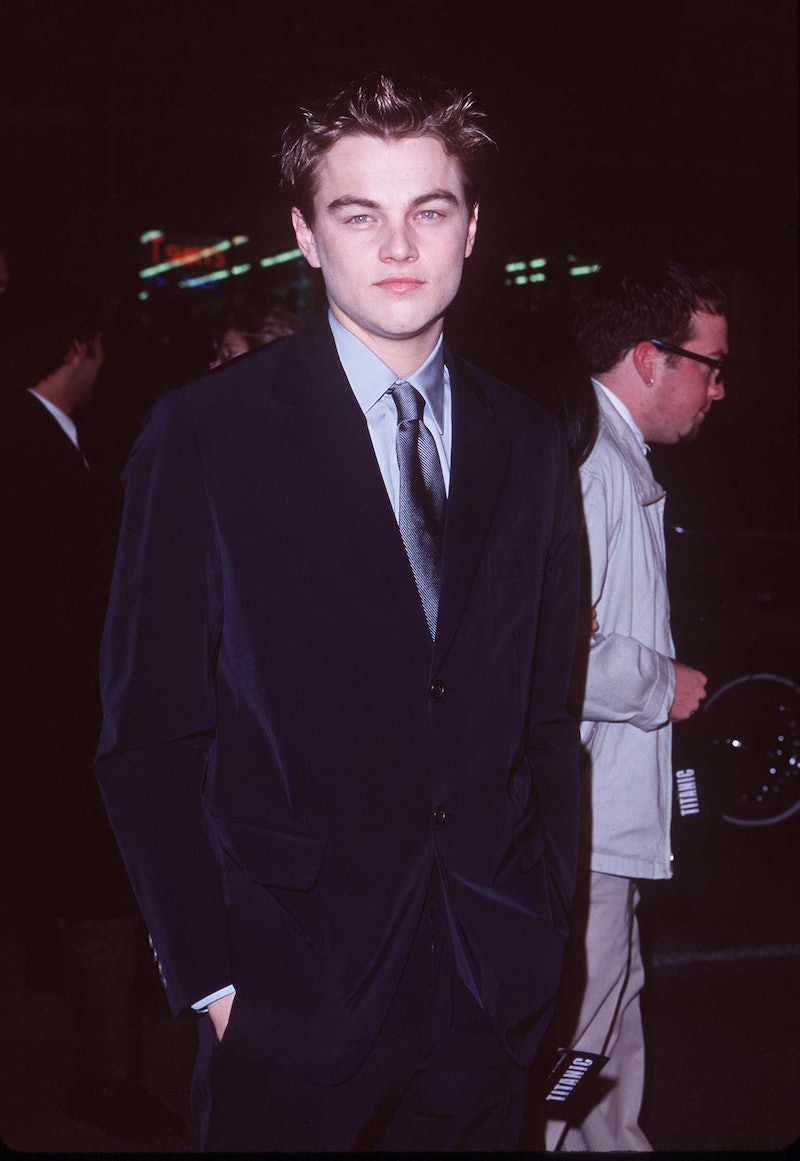 If you’re anything like me, you feel that sweet pang of Titanic nostalgia any time Leonardo DiCaprio and Kate Winslet are together at glitzy Hollywood event. With the stars of the 1997 blockbuster still at the top of the ranks of the movie industry, Jack and Rose reunions have abounded over the years. Hearts stopped everywhere when the Golden Globes cameras caught Winslet and DiCaprio having a moment at the ceremony where they both won in their categories earlier this month. And after the 2016 Academy Awards, the former co-stars could have matching “best friends” Oscars to go with their matching Globes. No matter how many years go by, I’ll never let go of my soft spot for Titanic. But no reunion can match the red carpet premiere of the movie for sheer (seriously, the dresses were sheer) ‘90s throwback charm. These incredibly dated photos from the 1997 Titanic premiere make me feel ancient, but my heart and my love for the James Cameron disaster romance goes on.

Obviously, the stars of the movie were in attendance. But who else attended the Titanic premiere? What long-buried ‘90s trends were they wearing? And most importantly, who was dating who? These photos capture a moment in recent movie history that divided time into two sections: before Jack took Rose on a date to steerage, and after. I know I’ll never be the same.

The movement of the earth around the sun tells me that Leonardo DiCaprio was 23 when Titanic came out. But I'm looking at this photo of him and co-star Billy Zane, and he's clearly on his way to a middle school dance.

2. A Pre-Lord Of The Rings Elijah Wood

Elijah Wood's leather jacket is kind of swallowing him, but it's one of the only items anyone on this red carpet would be caught wearing today. What's he holding in his hand, though? A coat check ticket? A deli number? Serving #31.

Love, love, love that the elder Rose (Gloria Stuart) and granddaughter Lizzy (Suzy Amis) walked the carpet together. They even coordinated their sparkles.

Hair gel sales must have been booming in the late '90s. Check out the Chandler Bing volume on DiCaprio's bangs.

Frances Fisher may play Rose's ice-cold mother in Titanic, but she brought the heat to the red carpet. Ruth Dewitt Bukater would have been scandalized by that plunge neckline.

6. Billy Zane Does Black On Black

A subtle pattern, a little chest hair. What's not to love?

It looks like the bear from The Revenant got a hold of Kate Moss' strapless cocktail dress. She makes it work, as usual.

Director James Cameron attended the premiere with his now ex-wife Linda Hamilton. According to The Telegraph, the actor later blamed Cameron's obsession with the success of the film as one of the reasons for their break-up. The Director wed Titanic star Amis in 2000 and they are still together.

Would Titanic have broken all the records that it did without the help of Celine Dion's earworm of a theme song? The singer feted the film on the arm of her husband René Angélil, who died on Jan. 14 after a long battle with cancer.

It's not a '90s party without a cocktail dress that looks a little like a nightgown. Zane's model girlfriend Jessica Murphy accessorized hers with a matching fringe shawl.

The Back To The Future actress is wearing the exact outfit I picked out from the Express at the mall for school picture day, I'm sure of it. A ribbed, turtleneck sweater dress should always be worn with a peace sign and a smile.

Dustin Hoffman made the Titanic premiere a family affair, posing for photos with wife Lisa Hoffman and their brood of adorable dark-haired children.

13. "I Left My Business Cards In Conference Room B"

Wayne's World actor Tia Carrere is the most professional-looking person at this shindig, and she's not even in the movie.

Bill Paxton, who plays modern-day treasure hunter Brock Lovett in the movie, brought his wife Louise Newbury and their youngest child — still cooking. Their blissful parent-to-be glow isn't a fluke; Paxton and Newbury are still together in 2016.

Of course Fran Drescher went to the Titanic premiere in a beret and an ankle-length brocade coat. I expect nothing less from Miss Fine.

Casual chic isn't a look that's easy to pull off for a premiere. Many have tried, and been taken to task on Worst Dressed lists for not looking sloppy. Model/actor Angie Everhart still manages to slay, even in leather on leather and with lapels that you could prick your finger on.

17. Did I Mention That Frances Fisher Is Fabulous?

If I had guns like that, I'd be showing them off for the press line too.

These Titanic premiere pics are making me all misty. Time for viewing #457.