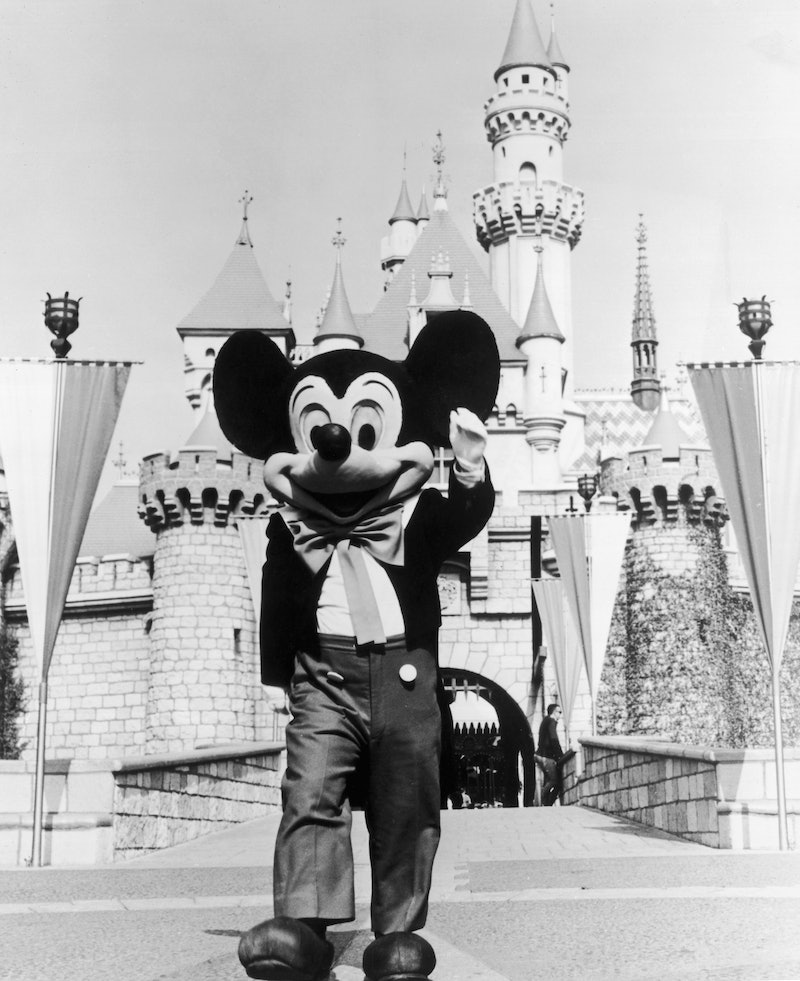 Even though Disneyland celebrated its 60th anniversary last year, it's still considered by many the "Happiest Place On Earth." But since its opening in 1955, the theme park has changed a lot — and I don't mean just in its size. These awesome photos of Disneyland in 1955 vs. now show how the original California theme park, which held its Diamond Celebration last summer, has evolved and changed throughout its many years in existence. It's truly fascinating — and dare I say it? — magical.As Los Angeles lore states, Walt Disney came up with the idea for Disneyland while watching his daughters play at the merry-go-round of another venerable park — Griffith Park, which is a lot like LA's Central Park — that has been around since 1926 and still remains a popular attraction today. Fast forward to July 17, 1955: Walt's vision opens to the public as a $17 million theme park in Anaheim, which is about 25 miles southeast of Los Angeles. But it wasn't all smooth sailing and happiness at first, as according to the History Channel, Disneyland's first days included concessions running out of food and drinks, counterfeited tickets, and malfunctioning rides. But the love was still there, and it remains today.

Check out how Disneyland has changed through the years in the amazing photos below.

It almost looks like a classic train station, doesn't it? But back in 1955, that's what the entrance to Disneyland looked like. It also seemed to be much quieter, too.

Now: Before You Get To The Gates, You See This

Characters! Promotions! And of course, lines, which we all endure anyway so we can enjoy our favorite theme park.

It's so weird to see that Sleeping Beauty Castle, one of the main trademark symbols of the Disney brand, was once so non-descript. Don't get me wrong, it's still a magnificent castle, but it's funny to think that once upon a time it was just gray and you could just lounge around it.

And now with a makeover, the castle is home to endless selfies, lots of color and decoration, and not as much lounging.

1955: Posing With The Seven Dwarves

Posing with your favorite Disney characters for selfies is all part of the fun of going to a Disney theme park. From this photo, it doesn't look like that was too popular back in 1955 — the girl in the photo looks to be more scared than delighted to be in the dwarves' presence.

Get ready to take so many photos with Mickey and Co. that it'll be impossible to decide which ones to post on social media.

Can you believe it? No crowds and only one family posing for a photo (with one balloon) in front of the castle. No Mickey ears or special merchandise. How things have changed.

Now: Way Too Much Disneyland Merchandise

Along with the castle, Disney merch has gotten a makeover: Now patrons are able to buy and don some rocking Mickey ears (some that are even custom made), along with purchasing those awesome Mickey balloons. Don't mind if I do.

Back then, it looks like the famous teacups ride was just as much fun — and it was the only ride of its kind in existence. The cups look so plain, but I think what's most interesting here is the theme park behind the ride, which shows a pirate ship ride and so much empty space.

Now, the teacups are decorated all fancy with lanterns hanging above. And it's no longer the only ride of its kind in the Disneyverse — according to Disneyland News, a version of the teacups now exists at every Disneyland park, including ones in Tokyo, Hong Kong, and Paris. Plus, look at all that theme park behind it — and of course, crowds.

Until his death in 1966, there was always a chance you could run into Mr. Disney himself at the theme park.

Now: Dine With His Character Creations

Unfortunately, hanging out with Walt can no longer happen, but you can totally dine with his characters at Disneyland.

Did you know that Walt had a secret apartment above the fire station in Main Street USA? It's where he and his family used to hide away, according to Walt's daughter Diane Disney Miller. "It was their residence there and they would invite people up, if there were special people in the park, mother and dad would go out and they would invite them up," she told the Huffington Post in 2012.

Now: Walt's Apartment Is Closed To The Public

Technically, it always has been closed to the public, but Walt's secret space is now scarely used and occasionally press has been invited up to check it out.

Even in 1955, Disneyland seems like it was the place to be,

As the saying goes: The more things change, the more they stay the same.

Look at that classic, uniformed marching band and the few people around them to watch the performance.

Characters parade along with so many fans around to watch.

According to Wired, Disneyland's "Dedication Day" not only included press and invited guests, but counterfeited tickets. That meant that instead of the expected 20,000 patrons, Disneyland had about 35,000 folks on its very first day to check out 20 rides.

Disneyland tickets are still counterfeited to this day — but it's also a way bigger crime, since the tickets are worth so much more and are way more in demand. And there are so many types of tickets you can choose from.

According to Yesterland, this cool stagecoach ride opened in 1955 in Frontierland. In 1959, the ride ceased and closed, but its legend lives on.

These days, you can get around Disneyland via Red Car Trolley. Unfortunately, the the only stagecoach is a corn dog stand.

Check out that fancy attire! Back in the day, patrons dressed to the nines for a day at the theme park.

Park goers are usually dressed in T-shirts, shorts, and sneakers — basically, whatever makes them feel comfortable, because they know it's going to be a long day of rides and fun at Disneyland. Of course, it's all worth it in it the end.

So much may have changed over the decades, but people's love for Disney has clearly stayed strong.