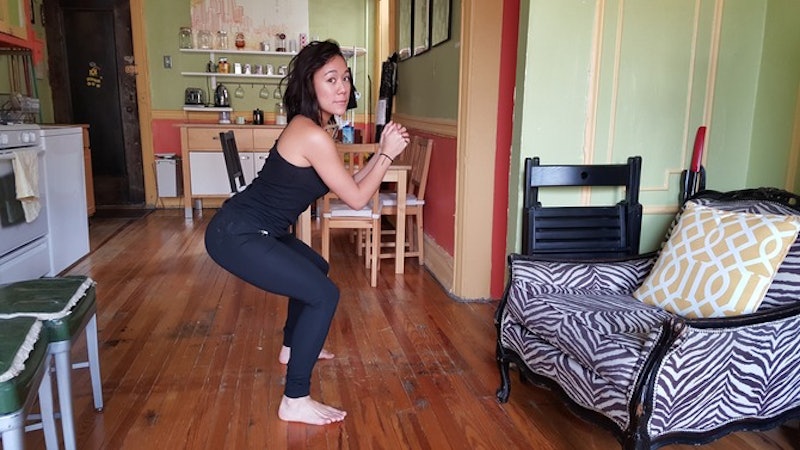 Ever since my late teen years I've liked exercising. It's a dorky thing to admit because, you know, who actually likes working out? I do.

It's the only healthy habit I've faithfully stuck to over the years, and it's been especially useful in those times that I really struggle with my mental illness. When I'm feeling especially anxious or particularly inclined to order three delivery pizzas and eat them in one sitting, I try to go out and do something active. It will never be a cure, but it sure does help me believe for a split second that everything is going to be OK.

My workout of choice? Yoga. I've been practicing since I was a teenager and I've been teaching for a few years now, so hardly a day goes by when some part of my day isn't related to yoga.

I've been feeling lately, though, like I want to mix it up. I've especially been interested in giving high-intensity interval training (HIIT) a shot. A few years ago, when the concept first gained a lot of attention, I reluctantly tried a few of the workouts with my then-roommate. I don't remember much — except the fact that they were really, really hard. We gave up within a few days. But after reading all the recent scientific research about how HIIT strengthens the heart, I knew I wanted to seriously try it out.

So I downloaded a free app called Nike Training Club, which has a wide range of workouts, including HIIT-like routines. After giving it a test run for a few days and learning that I didn't hate it with a passion, I decided to commit.

I would use Nike Training Club app five times over the next week to do HIIT routines. As far as diet and sleep patterns, I decided to keep everything the same. I wanted to see if any of the following changed: appetite, food cravings, and energy levels. To be clear, my goal here was not to lose weight, so there won't be any following reports that come from a scale (besides, I threw my scale into the Atlantic Ocean in 2012). I would do one day of yoga towards the end of the week, to see if anything in my body felt different.

I'm so sick in the head that I woke up as excited for this new workout. Not wanting to get too crazy this early in the game, I selected a 17-minute interval workout that was designed to rev up the metabolism. At least, that was the tagline. The movements ranged from simple high knee runs to alternating lunges to a little something called the "cha cha shuffle," which is just a fancy name for stepping to the side three times really fast.

I blasted a Beyonce/Macklemore type playlist and tried my best to keep up with the overly eager voice on the app. You're doing great! Push yourself! I felt a little silly, to be honest, and was glad that nobody was home to see me flail around like an idiot. As soon as I felt like I was getting the hang of it, though, the workout abruptly ended. I'd become so accustomed to doing hour-long yoga classes that this workout flew by in a split second. I almost felt like I had cheated. I stood around dumbly for a few seconds after it was over, wondering if I should, like, do an ab workout.

I decided against it and instead made the one thing my body was screaming for: a peanut butter shake.

That morning, when I stood up on my tiptoes to grab my Nutribullet off the top shelf, my calves started talking to me. I can't remember the last time they were sore, so I thought for a moment that something was actually wrong. Turns out it was just because of all those squat jumps I had knocked out the day before.

There's something about feeling sore that's really rewarding. It makes me feel strong and powerful, even a little bit accomplished. And I hadn't had that feeling in a really long time.

Later that day, after I had wrapped up all my work, there was a pep in my step as I changed into my wacky green spandex pants. I was looking forward to the core stability workout I had pre-selected that morning. It was a 30 minute routine that was focused on the midsection, and still meant to get the heart rate up and going. Frankly, I expected it to be kind of easy. I mean, I do core exercises all the time in vinyasa flow yoga — what was there to be done that I hadn't done before?

Pride comes before the fall, people. That little workout mercilessly kicked my butt, and I found myself sprawled on the floor after it was all done and dusted. There was this one move that was especially impossible: in plank position, with palms flat on the floor, you jump your feet in and out, as fast as you can, for 30 seconds. I imagine that's what death feels like.

I am sore in this picture. From head to toe, I am super duper sore. It's the kind of soreness that annoys me rather than pumps me up, because bending over to plug in my laptop charger has become a difficult feat. There may be a small part of me that feels badass, like I've physically achieved something quite substantial, but that part is buried underneath the whining.

I don't back down so easy, though, so I scrolled through the workouts to see which one I would conquer that day. I landed on a 15-minute "Intense Interval Training" designed by an Olympic sprinter. In hindsight, I think I was suffering from masochism.

It was more difficult than all the previous workouts combined, which was very unexpected considering its short length. There were a lot of burpees and general jumping around, two things that don't sound like they would cause much grief, but in reality leave you on all fours panting. But did I feel badass? Yes. A thousand times, yes.

In the midst of my invincibility, I was hungry. I was craving things I hadn't eaten in a really long time, like a Texas dry-aged T-bone steak. That, or hummus. There was no denying these workouts really get the appetite going. So, naturally, I had a cheeseburger.

Day 4 was my day of rest. I thanked the lucky stars and ate a few pieces of rosemary pound cake. I was still feeling sore — in my abs, my thighs, and triceps — but what really caught my attention was how energetic I was. I can't tell you if it was the actual workouts that were making me feel more lively (which is said to be a side effect of HIIT) or if it was just the high of all the new action.

On Day 5, I lined up another half hour workout that targeted the whole body. Not doing anything the day before really did me some good; most of the soreness had subsided.

I didn't know it before, but this particular routine had a few yoga moves incorporated in there, a fact that gave me some comfort. But the way they were used was totally new to me, and I found myself just as confused as ever before. Because I was working so hard to just keep up, I couldn't really work as hard as I would have liked, so my heart rate didn't skyrocket and I didn't really enjoy it. The whole thing was a bit anticlimactic.

Today was yoga day, and I was thrilled for it. I took it really easy and did an hour of Yin yoga. As much as I was having fun jumping around like a maniac, I knew my body wasn't really used to that kind of impact, so I figured my knees and hips could benefit from the long posture holds.

I usually love Yin, but I'm one of those people who looks at the clock pretty often to see how much longer I have to subject myself to these pretzel-like maneuvers. This time, however, I found myself soaking up every second of it, without even thinking about what the time was. Also, I realized that I was much more aware of what was happening in my body. I felt compelled to look closely at my hip alignment and shoulder placement, mostly because they were feeling a bit sore and needed TLC. It's incredible how the smallest aches can draw your attention to parts of the body that you wouldn't normally notice.

I was slaying HIIT by now. A lot of the strength-balance movements that were crazy hard at the beginning of the week were only moderately hard, and I was still having fun with every workout. The last exercise I chose to smash out had the word "Fierce" in the title. Fitting, really. It was only 15 minutes long, but jam-packed with good old fashioned HIIT exercises, like high-knee jumps, split leg jumps, and shuffle runs.

In light of David Bowie's devastating passing, I roared his greatest hits and poured every last inch of my energy into the workout. When it was all said and done, I did something completely insane: I chose to do another routine. Blame it on the grief, the adrenaline, or the combination of the two.

This one was only 10 minutes long, but it was weird. As you can see above, I was forced to do all these new combo moves that made me feel a bit dizzy. Thankfully, it was over before it even started.

I wrapped up my double feature ravenous. The only things that sounded good were peanut butter, almond butter, and chocolate hazelnut butter. Are you seeing the protein pattern here? I pulled out all three and alternated slathering them on a fresh banana, ending the week in a happy-as-can-be nut stupor.

As much as I love all the different shades of yoga, the deliciousness of trying something new and exciting made me want to branch out more often — I even want to take up dance classes now. While I may never love any exercise as much as my daily yoga practice, I know I'll at least have fun trying it. At the end of the day, this helped me remember that fun and novelty can sometimes be what actually matters most in an exercise routine.

My biggest takeaway is that my body is capable of doing so much more than I ever expected. Anyone who knows me will tell you that I'm not the kind of gal they could ever imagine squat jumping. But it doesn't matter what kind of gal I appear to be, or even imagine myself to be. I did a workout designed by an Olympic sprinter, guys! That's so far from my normal yoga routine that I can't help but feel like giving myself a solid pat on the back.