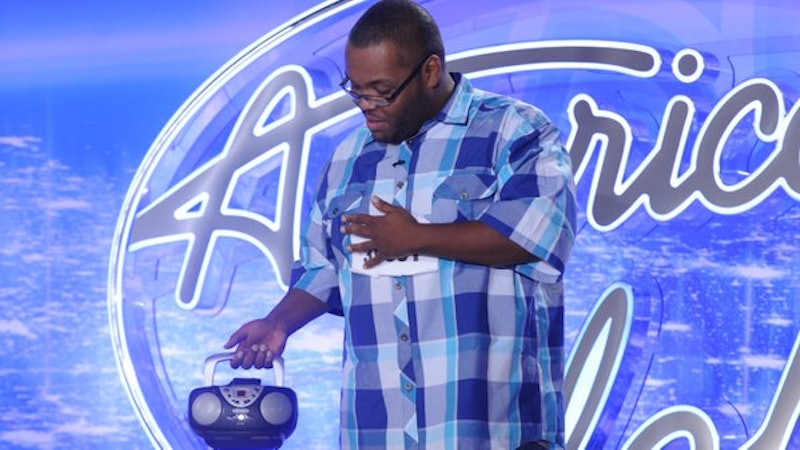 Meet your new American Idol obsession: Tywan "Tank" Jackson. The 29-year-old dance teacher danced and sang his way from the Little Rock, Arkansas auditions right into our hearts. Seriously, though, how can you not love a man who carried in the world's smallest boombox and opened his audition with an intense dance break to Jennifer Lopez's "Get Right"? His audition was entertaining and exuded talent from the start — and it only got better when he began to sing. Tank proved himself to be a talented performer tonight, and he was rewarded with a golden ticket straight to Hollywood.

Never have I seen a contestant on American Idol who was so excited to entertain. Even before he hit the audition stage, Tank had his former contestants engaged in a full-on "Tankercize" dance class — an exercise method he created on his own, of course. After pumping himself and the crowd up with his dance moves, he entered the audition room amped for the feature performance. With little introduction, the dance teacher put on a killer performance to "Get Right." To be honest, I expected it to be laughable at best but I was pleasantly suprised. Tank killed it on the dance floor — seriously, J Lo should consider him as one of her back up dancers. He followed this performance up with an even better vocal one, and earned a unanimous vote straight to Hollywood.

It's pretty rare on Idol to find a contestant who's audition is both fun to watch and worthy of a ticket to Hollywood. Usually the two categories are distinct and separate — there are the entertaining, silly, crazy auditions that are fun to watch but generally lack talent and there are the ones that are amazing with lots of talent, but provide little entertainment value. Thankfully, Tank was able to bridge the gap. With mountains of talent and personality for days, Tank impressed the judges with his singing, dancing, and million dollar smile. Will it be enough to get him past Hollywood? I sure hope so, because the world hasn't gotten enough Tank just yet.

More like this
18 Years After 'American' Idol, Jennifer Hudson & Simon Cowell Reunited On Her Talk Show
By Radhika Menon
20 Years Later, Kelly Clarkson & 'American Idol' Judges Reunite For Her Hollywood Walk Of Fame Star
By Radhika Menon
Jason Derulo Is Launching A New Singing Show In The UK
By Maxine Harrison
Ramin Djawadi Is Living Out His Dreams
By Rebecca Long
Get Even More From Bustle — Sign Up For The Newsletter