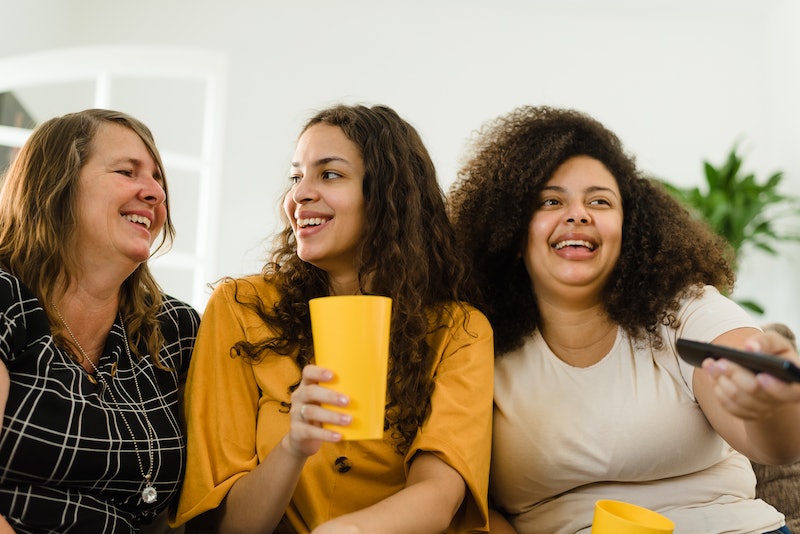 We all know there are certain types of people who we should avoid at all costs — no one wants to have any sort of relationship with a person who's cruel, or sadistic, or who exhibits verbally or physically abusive behavior. However, there are a variety of toxic personality types out there that aren't as obviously hurtful, but can be very damaging to have in our lives — and sometimes we're hesitant to cut people out of our lives when they haven't overtly done something to hurt us. The problem with this is that we can't help but be affected by the people around us, even if they're not overtly targeting us with blatantly hurtful behavior. Whether their actions makes us feel inferior, judged, anxious, or helpless, we shouldn't be afraid to walk away from certain relationships, just because we're worried that the other person is "not bad enough" to justify cutting ties.

And sometimes, it's even more complicated than that. Since we can't help but absorb some of the energy of the people in our lives, we should feel free to distance ourselves from toxic people who are relentlessly negative or who consistently exhibit patterns of less-than-admirable behavior, too.

You deserve to be surrounded by people who treat you with respect and don't negatively impact your emotional well-being — so, if there are people in your life who sound suspiciously like the below personality types, it may be time to consider cutting them out of your life.

1. People Who Take Advantage Of You

Some of us are inherently people-pleasers who hate to say no. If this sounds like you, it's helpful to recognize this in yourself and realize that you have the right to set healthy boundaries (and that it's an important skill to develop for your own well-being and happiness). But it doesn't give anyone the excuse to take advantage of you. If you have a friend or family member who constantly leans on you for support but is mysteriously AWOL whenever you're going through a rough patch, then it's probably time to reevaluate the friendship.

This tendency to use can manifest itself in many different ways — perhaps they're constantly asking to borrow money that you can't really afford to lend, or they repeatedly request favors but don't return them. Maybe they need to talk on the phone 15 times a day after a rough breakup, but they take forever to call you back when you've had a tough day and need to vent. You deserve support, so don't settle for any sort of relationship where the give and take is consistently unbalanced.

2. People Who Are Judgmental

There's a huge difference between exhibiting tough love and being judgmental. A caring friend or family member won't be afraid to give you some tough love — and let's be honest, we all need it sometimes. For example, if someone is genuinely concerned that you're drinking too much or dating someone who doesn't treat you well, they're looking out for you because they want you to be happy and healthy — and sometimes that requires telling you things that you don't necessarily want to hear.

But people who are simply judgmental have no place in your life. If, every time you walk away from interactions with someone, you feel as though they look down on you, then it's time to say "Adios." Some people are outwardly judgmental — you know, the types who say "I can't believe you're wearing that" or "Your salary is seriously so low compared to mine." Others are a little more subtle, but leave you feeling equally judged. We all deserve to be respected — so something's wrong if you feel consumed with anxiety every time you see a certain person, and are terrified that they're going to either overtly or subtly insult your career path, home, loved ones, or anything else.

3. People Who Are Always Negative

This can be a tough one — none of us wants to turn our back on a friend or family member who is going through a rough patch, or who suffers from depression or other mental health issues. But you have to take care of yourself, too — and if someone consistently brings you down and then rejects your attempts to help them, you may need to reevaluate the relationship.

Part of healthy friendships and family relationships is feeling comfortable enough to vent and be honest when life isn't exactly going great. But time spent around people who solely focus on the negative will likely take a toll on you eventually — especially if they make you feel as though you can't talk about the positive things in your life. And if, when you try to offer support and more positive ways of looking at a situation, they shoot you down and dismiss you as a naive Pollyanna, then they're putting you in an impossible situation. Everyone deserves the occasional vent session, but some people seem to be negative all the time and they don't want your help or advice. These relationships often end up feeling both thankless and taxing — you can't work harder at improving your friend's mental health than they are.

4. People Who Refuse To Take Responsibility

It can be draining and frustrating to be around people who will literally never admit that they have made an error in judgement or that something is their fault. We're all human and we all make mistakes — some that are fairly trivial, and others that have significant consequences we need to face like adults. (And yes, being an adult can be a huge drag — but there's no good alternative.)

While we should never, ever diminish someone's experience of being an actual victim (of abuse, assault, or anything else), be wary of people who think that every little thing that goes wrong in their lives is someone else's fault. Some people genuinely seem to think that the universe is out to get them. It gets old really fast when a person consistently refuses to acknowledge that they're in a less than ideal situation because they made some poor choices. And yes, it could potentially impact you in a way that's more than simply an annoyance — you never know when the eternal victim is going to decide that, this time, you're the one who's responsible for their unhappiness.

5. People Who Are Controlling & Jealous

When we hear the words "controlling" and "jealous," we tend to associate them with romantic relationships. And, of course, those qualities should be deal breakers when a romantic partner exhibits them. But our friends and family members can negatively impact our lives by being possessive, too — and sometimes, we don't recognize those signs as quickly.

People who get angry with you for spending time with other friends and demand a lengthy explanation because you didn't respond to their text message immediately are disrespectful of your boundaries — and you deserve relationships with people who trust you and give you the benefit of the doubt. (Because, hello — sometimes you're in a movie theater or a work meeting and it would be inappropriate to respond to a text STAT.) It's so important to be around people who value your independence. You should never feel guilty or forced to answer to someone, simply because you chose to spend Friday evening with another pal.

You know yourself better than anyone — so if a relationship feels like it's taking a toll on your mental health, ask yourself why. There's almost always a very good reason. And if the other person has toxic qualities, you shouldn't feel guilty about cutting them out of your life.