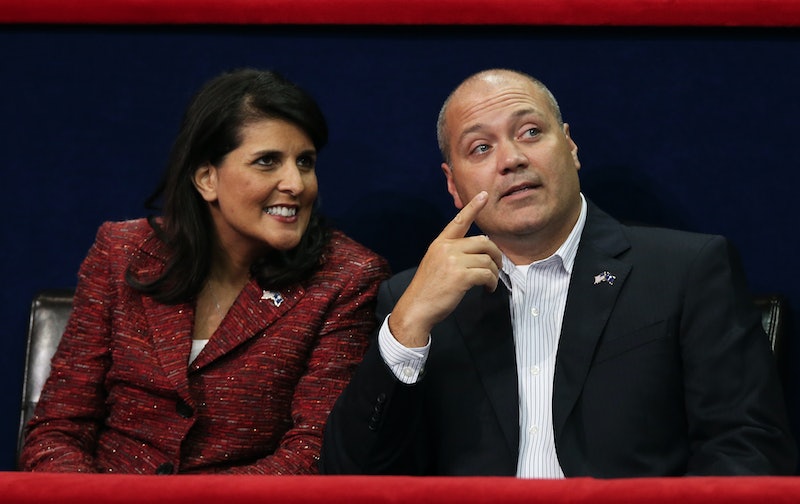 South Carolina Governor Nikki Haley, a rising star in the GOP party, got everyone's attention when she seemingly dissed Donald Trump in her Republican response to President Obama's State of the Union address Tuesday night. Even before the tiff, though, America became interested in Haley following her impassioned response to the deadly shooting in Charleston last year. As a popular female politician, many people want to know more about her personal life — like, how did Haley and her husband meet?

Regardless of how you feel about her political ideologies, Haley is an impressive lady — not only is she the first female governor of South Carolina and the first minority leader of the state, the 43-year-old is also the youngest governor in the country. In her State of the Union rebuttal, Haley urged Republicans to resist "the siren call of the angriest voices," confirming later that she was referring to Trump and other presidential candidates.

Trump claimed during the GOP debate Thursday night that Haley's a close friend of his, and didn't deny that he's angry, saying: "I'm very angry because our country is being run horribly and I will gladly accept the mantle of anger." Haley's already considered a likely GOP vice presidential candidate, and it's not surprising considering the recent acclaim surrounding her name.

As for her personal life, Haley has two kids — Rena, 17, and Nalin, 14 — and has been married to Michael Haley for almost 20 years. Haley and her partner met in 1989, during her first weekend as a student at Clemson University in her home state. Michael ended up graduating from the University of North Carolina at Charlotte, but they got engaged in the Clemson botanical garden. The Haleys married in 1996 in both a Methodist and a Sikh ceremony, as her parents are Sikh and she was raised in the faith. The governor now identifies as Christian, and her online biography says her family attends Mt. Horeb United Methodist Church in Lexington.

Michael is a captain in the 3-49th Agribusiness Development Team of the South Carolina National Guard and went on a year-long deployment to Afghanistan in 2013. His unit's goal was to help Afghan farmers switch from growing poppies, a raw material used to make opiates, to food and textile plants. He has since left his full-time position in the National Guard, but continues to serve part-time, according to Heavy. As the first gentleman of South Carolina, Michael does charity work for at-risk youth and is involved with the American Red Cross, the South Carolina Military Museum Foundation, and the Safe America Foundation's First Spouses Campaign.

The Haleys' 20th wedding anniversary will be this September, celebrating the time they've spent together since meeting as young college students.