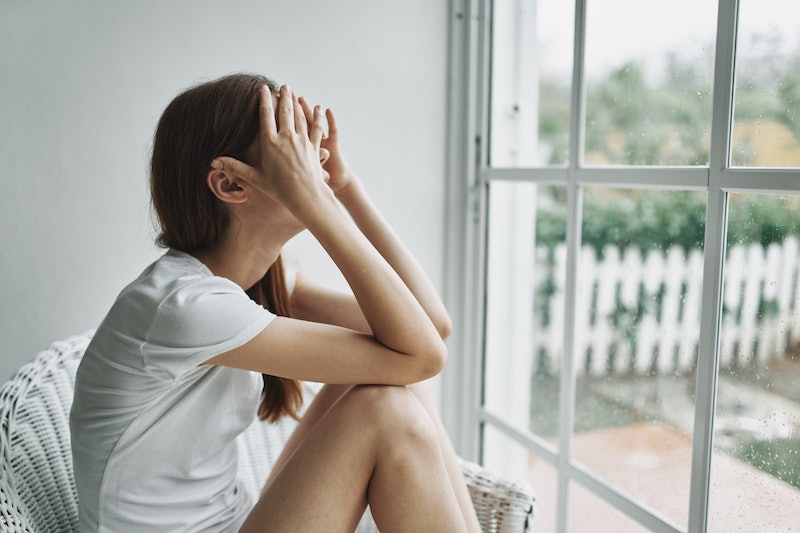 The harsh reality of every mental illness is this: not only does having it make it difficult to live your life, but it often comes with a stigma attached. Stigmas are the product of myths and misconceptions, but they can be incredibly damaging. Not only do they deter people from admitting they have a problem and seeking help, but they can cause the sufferers to blame themselves, which can in turn intensify their feelings of despair and helplessness.

PTSD is a mental illness that affects approximately 7.8 percent of Americans at some point in their lives — but, since recovery is possible with the right treatment, it definitely doesn't need to be a chronic condition. Unfortunately, myths and misconceptions about PTSD often discourage people from seeking help.

And since it's an illness that's not often openly discussed, sometimes people don't even know that they're suffering from the condition — they simply assume that their lives have been irreversibly altered due to the trauma and that living with PTSD is simply the "new normal" for them. When I developed the illness, I had no idea that I was experiencing PTSD. I was diagnosed with the condition years after my initial trauma occurred — and, as my therapist spoke with me and explained the reasoning behind my emotions and behaviors, I felt an incredible sense of hope and validation.

But these issues don't only impact the undiagnosed; many individuals who do realize that they have PTSD are afraid to admit it because they fear judgement from family members and friends. Many people with PTSD believe and internalize these myths and berate themselves for being weak. We often adopt the old adage that we need to pull ourselves up by our bootstraps, get over it, and stop "wallowing in self pity." But that's not how it works — and people with PTSD are neither weak nor self-absorbed.

Here are six myths and misconceptions about the illness that are damaging and need to become a thing of the past:

This is probably the most damaging PTSD misconception of all. It can intensify an individual's suffering and it deters many people from admitting that they need help. PTSD is a real and serious illness that requires professional help — it's decidedly not a sign of weakness or an example of a person wallowing in self-pity and refusing to just suck it up and move on. Seriously, no one wants to move on more desperately than a person who's grappling with the condition.

While it's true that not everyone who experiences a traumatic event develops PTSD, the illness is by no means an indicator of a person's strength or lack thereof. Just like some people have a genetic makeup that makes them more likely to develop physical illnesses, depression, or addiction, certain people are also genetically vulnerable to PTSD. Although research is ongoing, a recent study conducted at UCLA isolated two genes that increase a person's risk factor for developing PTSD.

2. Every Person With PTSD Behaves The Same Way

There are certain clusters of symptoms associated with PTSD, so sufferers will often share common symptoms like flashbacks, avoidance, and anxiety. But, since every person is different, we all cope with our PTSD in different ways. As an example, let's take a look at rape trauma syndrome. Some people will minimize the event and tell everyone how well they're doing, others will talk about it constantly and make it a cornerstone of their identity, and still others will repeatedly make drastic life changes — such as moving locations constantly — because they're hopeful that a change of scenery will help them move on from the pain of the past.

Furthermore, people develop different coping strategies when they're living with PTSD. For example, 50 percent of sufferers develop a dependence on alcohol and 30 percent struggle with drug addiction. PTSD can also manifest itself as an eating disorder — a study of eating disorder patients found that 74 percent had experienced a traumatic event and 52 percent were diagnosed with PTSD.

Aside from these dual diagnoses, symptoms can vary greatly. For example, some sufferers will become incredibly fearful of life in general and avoid any sort of risk, while others will do the opposite and engage in high-risk, reckless behaviors. Just as depression doesn't manifest itself in the same way in every single person, people with PTSD exhibit a range of symptoms. There's no "one size fits all" set of symptoms for PTSD.

PTSD can't even be formally diagnosed until one month after the trauma occurs. No matter who you are, you're going to be out of sorts and distressed after experiencing a trauma — but many people process the memories and move on from the shock. People with PTSD live in a suspended state of psychological shock and their feelings of fear and helplessness refuse to subside.

It's also important to know that not everyone develops PTSD within a certain time frame. Sometimes, the symptoms don't develop until years after the trauma occurs. This is known as delayed onset PTSD and, although not a lot of research is currently available, it appears that approximately one quarter of PTSD cases are delayed onset. At this time, it's not clear exactly why some people don't meet the criteria for a PTSD diagnosis until months or years after the trauma. In some cases, people previously exhibited certain symptoms but not enough to warrant an official diagnosis; in other cases, a stressful life event can trigger PTSD from a traumatic experience that occurred a long time ago.

These facts drive home the point that it's so important to meet with a therapist after a traumatic event — even if you don't exhibit all the symptoms of PTSD listed in psychology handbook the DSM, it can never hurt to take preventative measures and make sure that you're working through any symptoms you do have.

4. Flashbacks Are The Only Symptom

It's certainly true that flashbacks are a hallmark symptom of PTSD — and they are one of the toughest things to deal with, because you never know when they're going to strike. But people are diagnosed with PTSD when they exhibit symptoms in three categories. Flashbacks fall into the "re-experiencing" category, which also includes nightmares and extreme emotional distress when anything reminds them of the event.

However, there are two other categories with equally painful symptoms.

Avoidance: These symptoms include gaps in memory pertaining to the trauma, detachment, inability to connect with loved ones, and avoidance of any place or activity that reminds you of the trauma.

Hyperarousal: The symptoms in this category are characterized by constantly being "on edge." For example, the sufferer will grapple with severe anxiety, sleep disturbances, and an inability to let his or her guard down. They may also be skittish and startle easily.

Individuals are diagnosed with PTSD when they experience symptoms from all three categories — so flashbacks are, in a way, just the tip of the iceberg when it comes to the suffering that survivors endure.

Au contraire — and debunking this myth is very important to me, because I spent so much time believing it to be true. I could and should have spent that time working on getting better. When you're in the throes of PTSD, it starts to feel as though it'll never end. In some ways, I constantly felt like I was drowning and there was no life raft in sight — but I also just began to accept and believe that this would be my life. It became the norm to feel constantly distracted due to intrusive memories, experience extreme anxiety, and have an incredibly difficult time trusting people.

It can take a long time to find the right therapist and psychiatrist — and it can be extraordinarily difficult to open up to loved ones and let them help you. But with the right treatment, approximately 80 percent of PTSD sufferers recover. That's an encouraging statistic — and the remaining 20 percent can still benefit from treatment. Even if they don't fully recover, they can learn coping strategies that will improve their quality of life and make the symptoms more manageable. Since everyone is different, it can take time to find the right combination of therapy and medications — but it's so worth it, so no one should give up just because the first attempt at treatment wasn't especially helpful.

6. It'll Go Away If You Just Give It Time

Conversely, some people think that if you just suck it up and wait it out, the symptoms of PTSD will go away and life will go back to normal. This couldn't be further from the truth — the longer it goes untreated, the more difficult the illness can make it to live your life. For example, some people are afraid to go to sleep because chronic exhaustion is preferable to constant nightmares — and that can wreak havoc on anyone's ability to function, especially a person whose emotional state is already fragile.

When PTSD goes untreated, the symptoms can intensify and the sufferer's quality of life will often deteriorate more and more. Since recovery truly is possible, people should never try to simply "wait it out" or attempt to conquer the illness on their own. There are so many resources available to us — and we should use them because we deserve to recover and live a life that's free from fear, flashbacks, and helplessness.