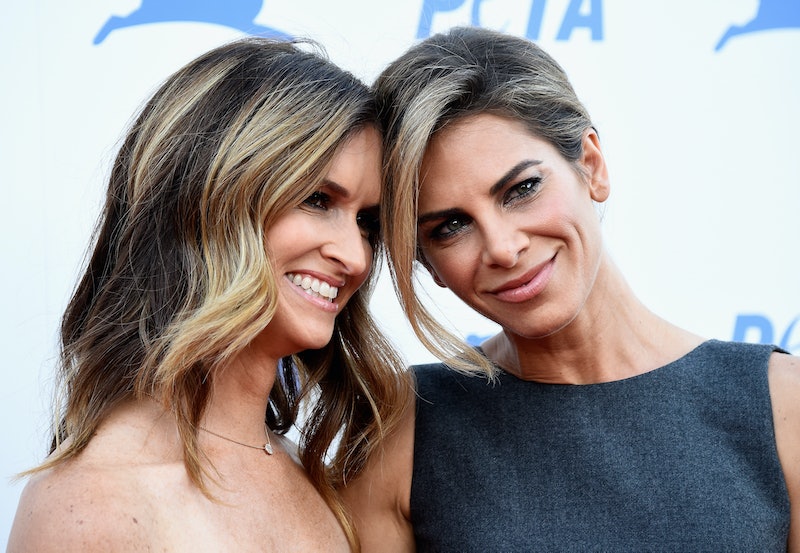 Jillian Michaels took the world by storm as a trainer on The Biggest Loser, and now she will be back on TV with her E! reality show Just Jillian . However, she isn't the only star of her show since it will also feature her family, including Jillian Michaels' partner Heidi Rhoades. The E! series will follow Michaels and Rhoades, along with their two children Phoenix and Lukensia as they go about their daily lives.

Although some news outlets have said Rhoades is Michaels' wife, the trainer cleared up the confusion in September 2015. In an interview with Health, Michaels revealed the pair are domestic partners. "We're not married yet," she told the magazine. "We were domestic partners. And, then, we had to co-adopt each other's kids." Michaels also shared with the magazine her concerns that Just Jillian will thrust Rhoades into a potentially negative spotlight.

I am most worried about Heidi. She thinks, like, "I got this," but I don't think you can ever really know until [you do it]. I was like, "Honey, people are going to say all kinds of horrible things." I worry that she's not used to being a public figure. But, she's a really smart woman; I'm sure she'll be fine."

With Just Jillian premiering on Tuesday, Jan. 19 at 10 p.m., Rhoades is about to become more notable than ever before. Here are six things to know about Michaels' partner before embarking on the new E! series.

1. She Is From Pennsylvania

On her Twitter account, Rhoades has referred to missing her home state of Pennsylvania multiple times. She even thanked Michaels for bringing her the regional snack of whoopie pies one time.

2. She Formerly Was A Music Manager

Based on her Twitter account, Rhoades is a big music fan, which would make sense since People wrote in 2012 that she was previously a music manager. As the above tweet shows, she worked with artist Chantal Kreviazuk, and she was also the publicity contact for the band Uh Huh Her.

3. She Is A Yoga Instructor

According to The Daily Mail, Rhoades is a yoga instructor now. It seems like she has a love of fitness in common with Michaels!

4. She Gave Birth To Their Son

Rhoades was really introduced to the world as Michaels' partner when the pair was featured in People after they ended up having a biological child and bringing home an adopted child all in the same week. Rhoades gave birth to their son, Phoenix, on May 3, 2012. Then, only four days later, Michaels went to Haiti to bring home their adopted daughter, Lukensia.

5. She Loves To Cook

In the aforementioned Health interview, Michaels talked about the pair's cooking skills. "We're terrible cooks! Well, Heidi is a good cook, but she doesn't have a ton of time," Michaels revealed. So, it seems these vegan scones aren't indicative of Rhoades' usual culinary skills.

Just like she shares her taste in music, Rhoades loves to share the TV shows she likes on Twitter. From Grey's Anatomy, Nashville, and American Horror Story to Orange Is the New Black, Mad Men, and The Leftovers, Rhoades has mentioned time and time again on Twitter that she's a fan of good TV.

Since Rhoades knows good television, it gives me faith that, between her and Michaels, Just Jillian will prove itself to be a reality TV series worth watching.