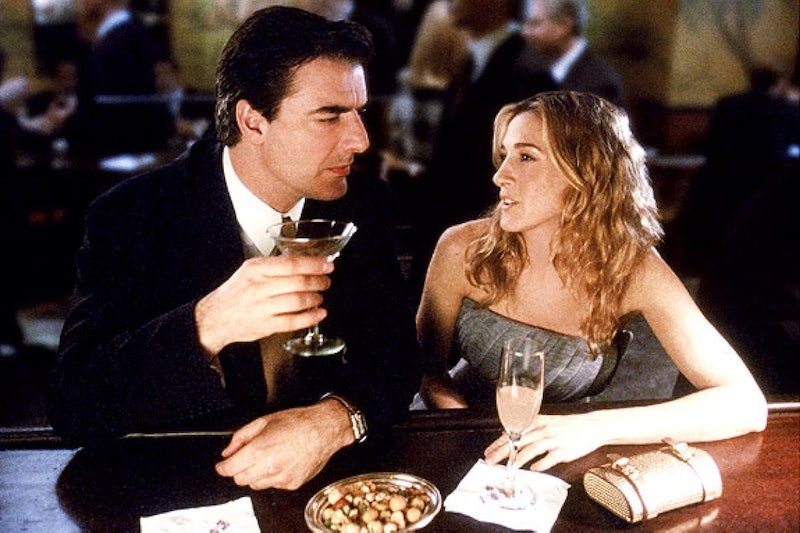 For all you Mr. Big fans out there, wherever you are, here's some bad news: In a Kindle Singles interview, Sex and the City creator Darren Star revealed that the Carrie and Big ending on SATC was not what he intended for the series. In case you need a refresher, the HBO show ended with Mr. Big, Carrie Bradshaw's longtime unavailable paramour, finally telling her that he loved her. This set the stage for the couple's marriage in the show's two ensuing movies.

Not only did Star reveal that he did not intend for this to be the ending, but he described the show's conclusion as having "ultimately betrayed what it was about, which was that women don’t ultimately find happiness from marriage." He revealed that the show's final plot lines were not his idea, but he doesn't seem bitter about the fact that other writers took over and sent the series in a different direction, describing himself as having "very, very, very few complaints."

Personally, I was never a fan of Big's, but putting my preferences aside, I completely agree with Star that the Carrie/Big ending was not consistent with the show, or at least the show's best moments. Here's why I think Carrie and Big should never have gotten together.

It Made The Show A Romantic Comedy

Star described the show as "going off script from the romantic comedies that had come before it." He elaborated that "that’s what had made women so attached. At the end, it became a conventional romantic comedy." I have to agree; my favorite parts of the show were when a character's fantasies were viciously confronted with reality, and my least favorite parts were when it seemed to be a wish-fulfilling fantasy of romance and life in New York. I love rom-coms, but I liked that Sex and the City was more cynical than that in order to tell more realistic and varied women's storied. For that reason, I wish the show had eschewed the traditional romantic comedy end.

Big And Carrie Already Had Problems

A frequent theme on the show was that relationship problems don't go away, however much you want them to. Carrie and Big had lots of problems, and Big was rarely emotionally available enough to deal with those issues. The realism of SATC would emphasize that a romantic declaration does not make problems go away, but the ending suggested that it was all that Carrie and Big needed.

The Show Was Always About Carrie's Independence

Carrie was frequently called out for centering her life too much around men. Often, she resolved these problems by focusing on herself, her friends, or her work. I think that an ending in which Carrie declared her independence, even unhappily, would have been more consistent with her growth as a character.

A theme that Charlotte was often forced to realize was that love was not a fairytale. So why did Carrie get a fairytale ending? A little more ambiguity would, have redeemed the final ending, rather than tied it up in a bow.

Big Was A Jerk

OK, I'm showing my hand here. I really don't like Big; I was a much bigger fan of Aidan's. Big often seemed to make Carrie feel ridiculous, unwanted, and confused. He always seemed like more of a fantasy of a real man than a viable romantic option, which were the kind of men the SATC women dated, but did not marry.

Almost All The Women Ended Up Married

If Carrie had stayed single, she would have been the only one of her group of four friends to remain so at the show's end. Charlotte and Miranda were both married by the series' end, and Samantha was in one of the most committed relationships she'd ever been in. A series that appeared to depict the varying desires of women contradicted that idea at its end by pairing up all of its characters.

Personally, I like to imagine that the movies never came out, and after the big declaration, Carrie and Big slowly realized that their love was real, but not practical. They broke up, and Carrie continued her love affair with shoes, New York, and writing, perhaps eventually meeting a guy who was a less intimidating and a lot more fun than Big.