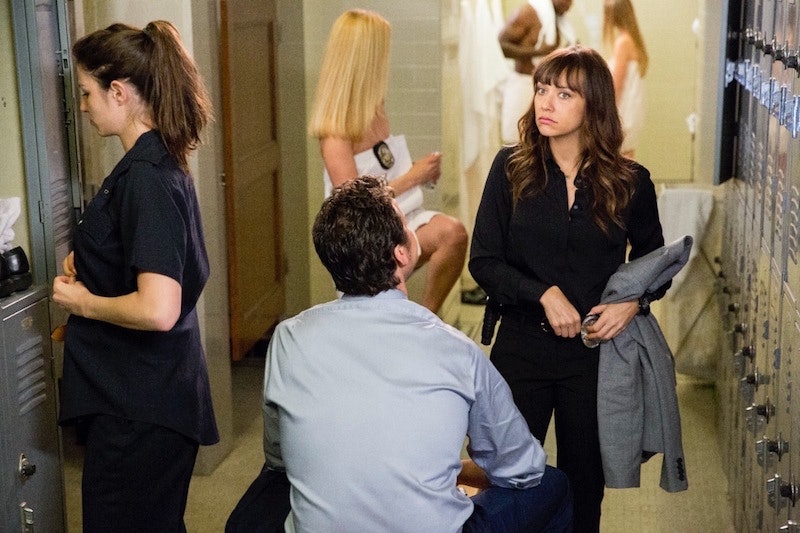 TBS' new police procedural spoof Angie Tribeca premiered on Jan. 17 in a 25-hour nonstop marathon that turns watching television into an extreme sport. Within just a few minutes of the show, the jokes begin piling on so densely that it's impossible to keep up with them all, let alone to keep up with all 25 hours. But now that the initial ride is over, will there be Angie Tribeca Season 2 anytime soon? Well, there is some very good news for fans of Rashida Jones' new series: the show was picked up for Season 2 months before Season 1 even premiered, back in November of 2015. And according to TV Line, the ten-episode Angie Tribeca Season 2 will premiere on Jan. 25.

The first season debuted in an unconventional way, but the second will be more typical for cable, airing a single episode per week. Because of the timing, it will probably feel like Angie Tribeca had a 20-episode Season 1, when in reality the two sets of 10 episodes were produced separately. With a look at some of the cast and crew's Instagrams, you can catch a glimpse into the production of Season 2, and maybe get an idea of what to expect from the show's (very quick) return.

Based on this post from Jones, it looks like there's some kind of fire or smoke bomb on its way in Season 2.

I look forward to seeing what leads to this incredibly hilarious explosion.

They're Getting An Early Start

And another one from Jones, which shows the cast working early in the morning out on location somewhere. Have to say, this shot doesn't give many clues, but it sure is pretty.

Detective Geils Will Have A New Look

Hayes MacArthur, who plays opposite Jones as Detective Jay Geils, is rocking one pretty convincing bald cap for the show. Could it be a fashion choice? Accidental run in with a razor-wielding crook?

Detective Hoffman Will Be Working Hard

Yep, Angie Tribeca is the type of show where a dog is a detective. A dog who will continue to be on the case when Season 2 premieres.

There's a glimpse of Alfred Molina, back for Season 2 as the medical examiner. Overall, it seems like Angie Tribeca Season 2 will pick right up where the first season left off, which makes a lot of sense considering that they're only premiering a few days apart.