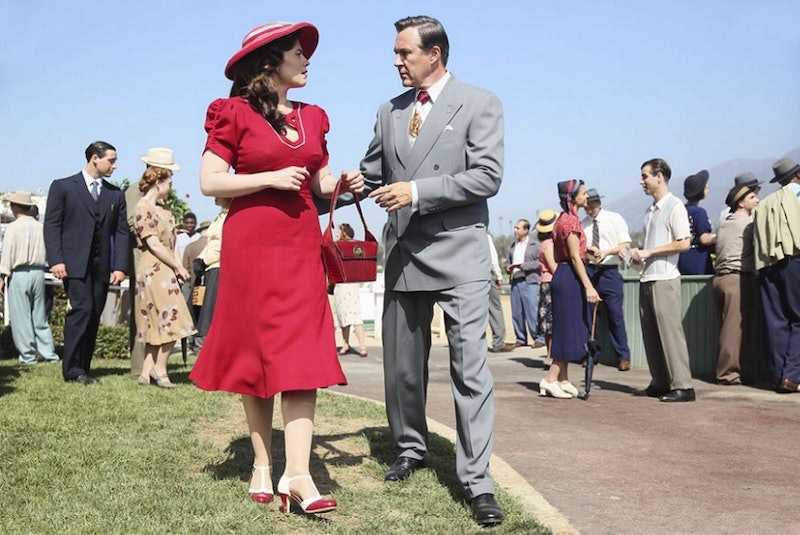 When Agent Carter roundhouse kicks her way back to ABC this Tuesday, she'll be joined by some old friends and foes. Season 2 plucks Peggy Carter from the bustling streets of New York and sets her down in glamorous Los Angeles. Trusty Edwin Jarvis will make the trip with her; her colleague and sort-of love interest Daniel Sousa is already installed at the West Coast office of the SSR; Howard Stark will swing through; and Black Widow graduate Dottie Underwood still has a score to settle with the agent. But a new city and a new case also mean new characters. Among the additions to Agent Carter Season 2 is Calvin Chadwick, played by Currie Graham.

Information about the character was scarce when the Agent Carter creative team announced him at New York Comic-Con in October of last year. Deadline reported at the time that Calvin Chadwick would be a "high-powered businessman" — not the most exciting character description for a Marvel show. It's Chadwick's personal connections that will have fans paying attention to his every move. He's married to Whitney Frost — in Agent Carter, a rising Hollywood ingenue with an inventive streak. In the source material, Frost is the alter ego of Madame Masque, a super-villain in a gold mask who debuted in Marvel comics back in the '60s. Agent Carter's showrunners have been touting Madame Masque as this season's big bad, though she'll be an interpretation of Masque that fits into the show's realistic style. "She never wears a gold mask, but you’ll see a nod to that," co-executive producer Michelle Fazekas told Entertainment Weekly.

Does Calvin Chadwick know about Whitney Frost's criminal activities and is he involved in some of his own? Agent Carter is saving a lot of those details for the 10-episode sophomore season. But in an interview with Marvel.com, Graham and Whitney Frost actress Wynn Everett talked about the mutually respectful relationship between their equally dominant characters. Graham said:

Whatever Frost and Chadwick's flaws may be, laziness isn't one of them. And neither is a lack of spousal support. Everett makes a statement in the article that nearly confirms that Whitney Frost's husband is her partner in crime as well as life, and is probably bankrolling her experiments. "He knows I can do what I say I can do, especially in the science world," Everett told Marvel.com. "So he’s really the only one who gets me."

So Frost and Chadwick get each other, but can Peggy Carter "get" them both? Agent Carter Season 2 is going to be another wild '40s ride.