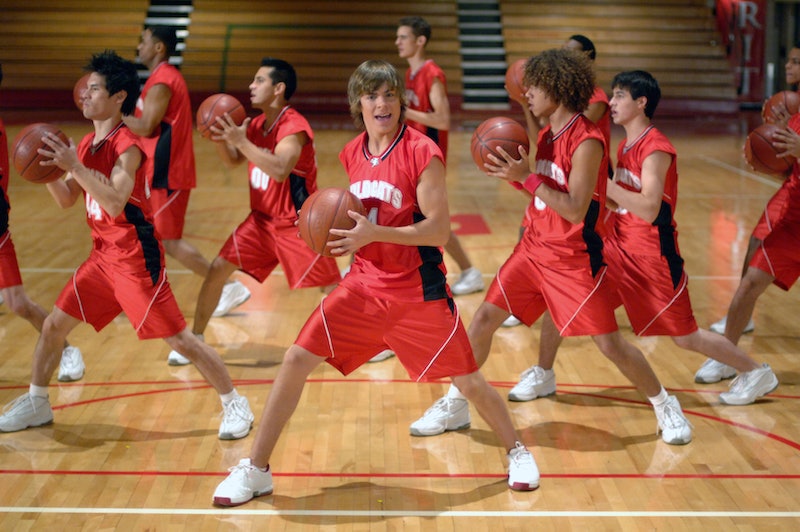 It's been literal years, and still people aren't over the grand love story that was Troy Bolton and Gabriella Montez from High School Musical. And who could blame them? Not only did they light up our screens with their musical Romeo and Juliet high school story, but Zac Efron and Vanessa Hudgens also dated for years after the camera stopped rolling, making people love them together even more. Thus, it comes as no surprise that people are freaking out over the High School Musical reunion special set to air on Wednesday, January 20. However, eagle-eyed fans might have noticed that there's a certain name missing from the list of stars coming back for the Disney special — a certain huge, huge name. That's right: Zac Efron won't be in the High School Musical reunion special, unless you count his pre-recorded message that will play during the airing. But why? Why, Efron, why?

As it turns out, Efron has got his head in the game. During the time at which the reunion was likely filming, the former Disney star was likely filming either Dirty Grandpa, Neighbors 2: Sorority Rising, and/or Mike and Dave Need Wedding Dates, all of which are post-production and set to be released in 2016. Even now, Efron still hasn't stopped working. He is currently filming a movie called The Disaster Artist, and, of course, with all three of those former films being post-production and releasing trailers, he's got press tours and premieres to contend with. If he had time to squeeze in filming a High School Musical reunion special in between all of that, he'd be superhuman. As it is, Efron was not actually a gorgeous robot produced in a factory somewhere, so it's totally understandable that he had to sit this one out.

The fact that he made the time to pre-record something for the special is really a testament to how much he loved not only the films that gave him his start, but also the cast mates that he still keeps in touch with to this day. Efron didn't have to do that. In fact, as I just said, he was really way too busy to do that. But he still did, so his absence in the special shouldn't be taken as a lack of regard for the movies, the franchise itself, or the fans. If you weren't already in love with Zac Efron, then now might be the time to reconsider. He might not be in the special, and we might not get to watch him pal around with Ashley Tisdale and Vanessa Hudgens like the good old days, but he hasn't forgotten about us. He knows we're all in this together. He's still a wildcat. He's just got his head in a different game.

And now that I've fit as many High School Musical puns into one paragraph as I possibly can, I think it's about time we all set aside the room in our schedule to rewatch all of the films in preparation for the reunion special. The cast aren't the only ones who are excited about this.