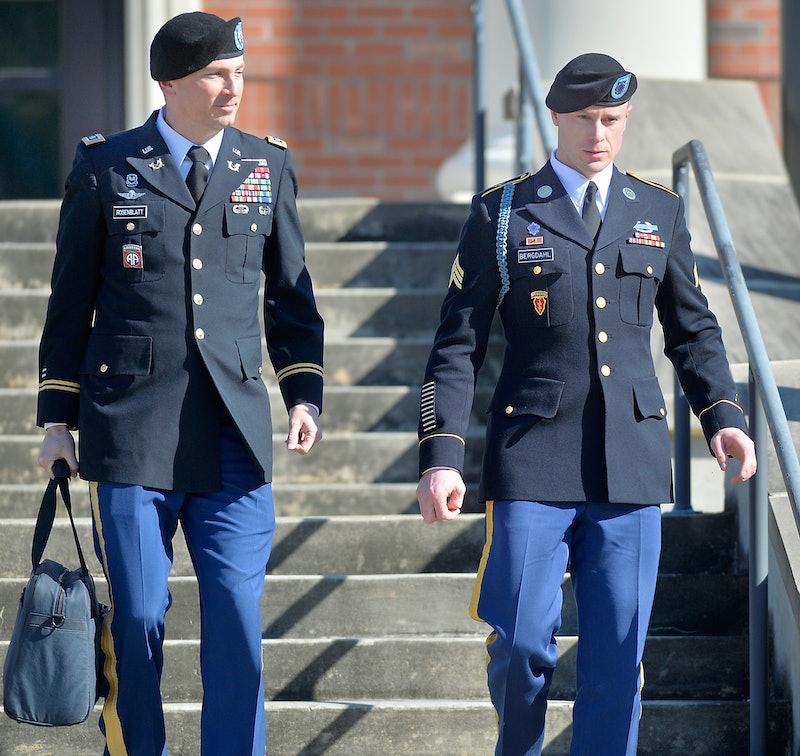 Serial fans everywhere let out a cry of disappointment last Thursday when it was announced the beloved and highly addictive Serial podcast would change to a bi-weekly schedule. If the pages and pages of supplemental material on the podcast's website aren't enough to keep you busy in the now even longer days between episodes, then there are plenty of relevant books to read if you love Serial 's second season.

Unlike the first season of Serial, which focused on the 1999 murder of Baltimore high schooler Hae Min Lee, the sophomore season is about a case that is known widely across the country. Media outlets have been covering the story of U.S. Army Sgt. Bowe Bergdahl since his disappearance from his post in Afghanistan in 2009, and continue to report on it now, as Bergdahl faces court-martial and a possible life sentence.

Serial, however, goes beyond that ongoing narrative and into some dark and murky waters.Complicated and layered, Serial Season 2 is not only telling the story about Bergdahl as a deserter and POW, but that of the war in Afghanistan, Taliban fighters and other terrorist organizations, the U.S. military, and the political climate and rules of war as a whole.

If you just can't wait two weeks in between episodes, or you just can't get enough of Bergdahl's story, here are nine books to read if you are obsessed with Serial's second season.

Mentioned in the first episode of Serial Season 2, Istvan Banyai's picture book was used as a metaphor of Bowe Bergdahl's story. A book of pictures within pictures and completely without words, Zoom is all about perspective — much like Serial.

2. A Rope and a Prayer: The Story of a Kidnapping by David Rohde and Kristen Mulvihill

The Haqqani network, a group associated with the Taliban in Afghanistan and Pakistan who was responsible for Bowe Bergdahl's imprisonment, had another hostage that escaped just days before Bergdahl's own capture: journalist David Rohde. A Rope and a Prayer is the story of Rohde's kidnapping in Afghanistan, and the story of his wife and family at home in New York who struggled with the aftermath of his capture. Part memoir, part journalistic investigation, this is an insightful, emotional, and and detailed read.

One of the best parts of Serial is the incredible storytelling of Sarah Koenig and the entire team. If you're into the podcast for its dramatic narrative qualities, then you'll love Khaled Hosseini's A Thousand Splendid Suns, a story of two Afghani women over a 30-year period. Heart-wrenching and poignant, it will keep you busy until the next episode, I promise.

When Bergdahl was released in 2014, his freedom was exchanged for five Taliban members who were being held at Guantánamo Bay. As Bergdahl explained in his interviews, the dark history of Guantánamo Bay was a constant presence in the minds of his captors and was even a motive for some of the poor treatment he received. If you want to know more about Guantánamo, last year's controversial memoir from detainee Mohamedou Ould Slahi, Guantánamo Diary, is an eye-opening selection.

5. A People's History of the United States: 1492 to Present by Howard Zinn

To understand the present, you have to understand the past, and there's no better guide than Howard Zinn's A People's History of the United States. A comprehensive and readable history of America from Columbus to the war on terrorism, Zinn's award-winning classic is a must read.

6. Games Without Rules: The Often Interrupted History of Afghanistan by Tamim Ansary

Afghanistan has a long and violent history, and Tamim Ansary explores its complicated past in Games without Rules, Drawing from his own background and the sources from Afghanistan and the Western world, this accessible, readable narrative will shed light onto a country who has long the subject of international controversy.

7. Born Under a Million Shadows: A Novel by Andrea Busfield

Told through the eyes of an 11-year old boy, Fawad, Burn Under a Million Shadows is a fictional account of life in a post-Taliban Kabul. Deeply moving and utterly heartbreaking, Busfield's novel is about love, loss, and loyalty to one's country whose incredible storytelling will be appreciated by any Serial listener.

8. No Way Out: A Story of Valor in the Mountains of Afghanistan by Mitch Weiss and Kevin Maurer

In No Way Out, veteran journalists Mitch Weiss and Kevin Maurer recount the terrifying, tragic story of a mission gone wrong in the mountains of Afghanistan and the soldiers who fought for their lives to get out. Drawing off of several interviews and first hand accounts, No Way Out is a nail biting, heart-thumping read — for those who love Serial's suspense and expert reporting.

9. Outlaw Platoon: Heroes, Renegades, Infidels, and the Brotherhood of War in Afghanistan by Sean Parnell

Set in the some of the most dangerous terrain in Afghanistan, Outlaw Platoon is Lieutenant Sean Parnell’s true story of life in the U.S. Army’s 10th Mountain Division. A dramatic story of heroes, bad guys, and the perils of war, Parnell's book will offer a different perspective than Bergdahl's when it comes to brotherhood and loyalty in the armed forces.

More like this
10 Must-Read New Books Out This Week
By K.W. Colyard
Zosia Mamet Opens Up About Her Eating Disorder
By Zosia Mamet
Watch The Emotional Trailer For Dolly Alderton’s 'Everything I Know About Love'
By Bustle UK
The 20 Best Audiobooks To Fall Asleep To
By Aoife Hanna and K.W. Colyard
Get Even More From Bustle — Sign Up For The Newsletter