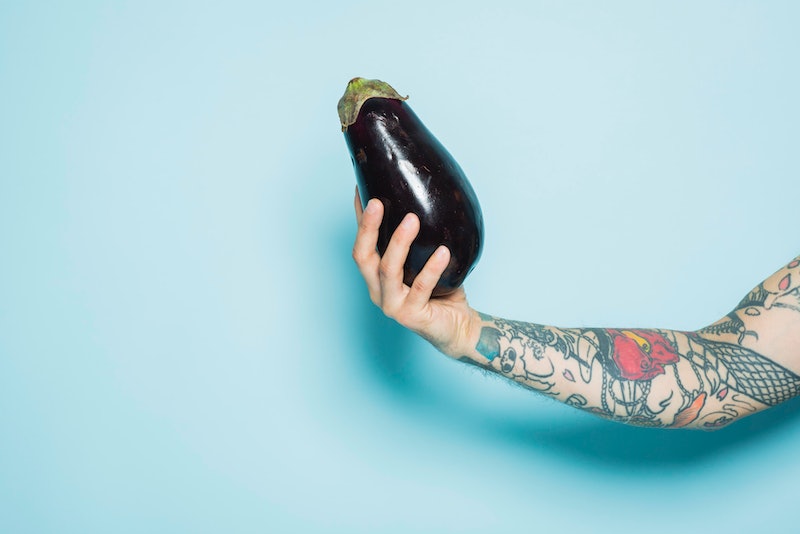 Is there such a thing as having sex with a penis that's too big? Sure, movies, magazines, Magnum condom commercials, and plenty of people you talk to will have you thinking that "bigger is better" — but is it really? In recent news, a man with a 19-inch penis revealed how his gigantic penis is actually ruining his life. In fact, sitting down, sleeping, and even getting around is problematic for him.

Sure, there are obvious pros to having a big penis. For one, even though most women need clitoral stimulation to climax during intercourse, our culture often says you're "better at sex" if you have a big penis — whether you are or not. Plus, certain sex positions with a big penis may feel better for some women.

But the jury is still out on just how big is too big. Just like penises are all different sizes, so are vaginas, and what may feel amazing to one person may not to another. While some ladies look at a very well-endowed penis as a challenge to be conquered, others end up feeling more pain than pleasure. To find out what it's like to have sex with someone with a too-big penis, I asked a few ladies who have been there, done that to dish on how it feels for them. Read on for what they had to say about their encounters with too-big packages.

"It's amazing! It's much easier to climax. In the beginning I did bleed a bit. But it was worth it. Now I'm used to it."

"My ex was a little too big for me. We would engage in a lot of foreplay that involved his penis right at the entrance to my vagina. For whatever reason, just having it there made my body adjust. I'd be like, 'There's no way this is fitting.' But he'd just push a little bit more in gradually, then I'd be like, "'Oh, now it's inside me. Cool.'"

"It literally felt like skin of my vagina was tearing, like when they put the speculum in at the gyno. Alas, I ended up marrying the guy — we've worked out some of the kinks, but, uh, not all of them.

"As a pretty petite person, I've dealt with my fair share of oversized penises, and they are NOT all they're cracked up to be. For the most part they're just kinda painful — like trying to cram a supersized tampon up there, but worse. Other times, it literally won't fit without a ton of foreplay, and in that case it's easier to find other, non-penetrative ways to have fun."

"I felt bad for him, because he obviously knew it was difficult and had problems before, and he tried to be considerate. It was just that he would get carried away and I'd have to tell him to slow down or switch positions (certain ones were just a no-go). It was OK, because it worked in some positions, but it made the whole thing a bit awkward."

"I lost my virginity to a guy who was too big and he just didn't get it. He was super proud of how well hung he was, and didn't understand why I wasn't enjoying it. I just remember being in so much pain."

"I experienced my first really big dick after I had been fisted for the first time. I feel like that really helped me get ready for it. My boyfriend now is 11 inches when he's hard, and we have incredible sex."

"For me, having sex with a guy with a huge penis is enjoyable. But when it comes to oral sex, it presents a real challenge. With the last guy I was dating I'd always do my best to get most of it in my mouth, but I'd choke almost every time."

"Having a big dick isn't what makes you a good lay. Paying attention to the person you're doing it with and making sure her needs are met regardless of your dick size, that's what makes it good. I've had sex with big penises where the guy attached to said penis thought jackhammering was enough to get the job done since he was so well-endowed. I've also had big guys take their time, pay attention to my reactions and adjust accordingly. Big dicks are at their best when the guy isn't being a big dick, IMHO."

"I went from one extreme to another: I dated a guy with a really small penis, and then my next boyfriend was huge. With anything in life, there are pros and cons. Positions that I barely felt anything with my last boyfriend in felt amazing — but some, like doggy style, were just too much for me to take."