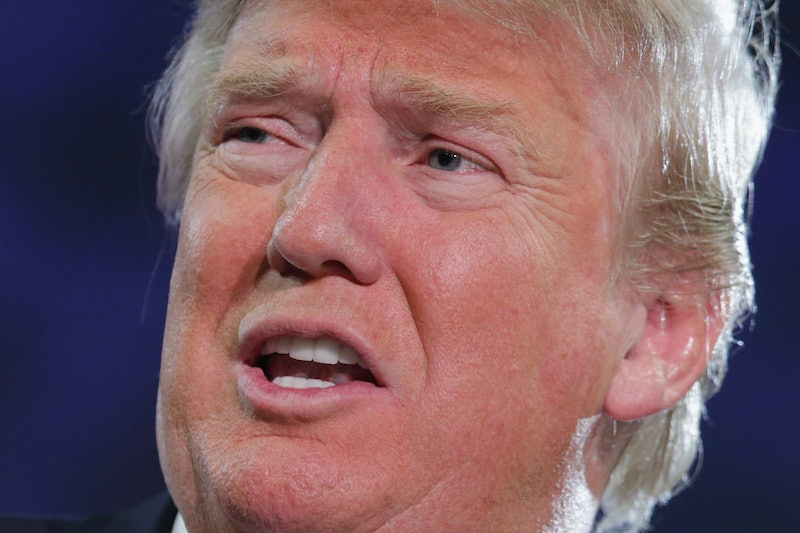 Even if you're a fan of GOP presidential frontrunner Donald Trump, you've got to admit that the man has said some wild stuff. Many people like him precisely because he's unafraid to speak his mind, but the consequence of that fearlessness is that he's racked up a lot of bizarre and sort of terrifying quotes over the years. The worst Donald Trump quotes make for a scary collection, so proceed at risk of fury and severe head-shaking.

Trump first rose to prominence in the 1980s, and throughout his career as a real estate mogul and pop culture personality, he has been just as bombastic and ridiculous as he is today. His long history of salacious comments has earned him a headstrong reputation, and that seems to be benefiting his polling numbers. Trump has been toying around with running for president since the early 1990s, but perhaps his media presence had to reach a critical mass before he could be a viable candidate. His hit reality show The Apprentice made him a household name when it started in 2004. In true entrepreneurial fashion, he traded his cultural visibility for political capital to kick-start his race for the White House.

Whether you’re a fan or a hater, these Trump quotes might give you a reason not to want him as the next president.

In 2011, Trump bragged about his "foreign policy expertise" during an interview with Fox and Friends:

The fact that there are multiple tweets ... I can't.

The longstanding feud between Trump and O'Donnell started way back in 2006. As is his wont, Trump pulled out all the stops roasting Rosie.

Despite being completely unaffiliated with her and twice her age, Trump saw the need to comment on Perry's marriage. Classy move for someone who's been divorced twice.

The embodiment of altruism and compassion. What's the over/under on the foreign aid budget getting cut if The Donald becomes president?

According to John R. O'Donnell, former president of the Trump Plaza Hotel and Casino, Trump has made some extremely disparaging remarks about African Americans and Jews. "Laziness is a trait among blacks ... Black guys counting my money! I hate it. The only kind of people I want counting my money are short guys that wear yarmulkes every day." It's a two-for-one racist insult.

This is the guy who could be the next president of the United States. Seriously. This is not an elaborate prank.

Apparently, when you're president, you're never allowed any leisure time ever, or the entire country will fall apart.

Judging from this bizarre, laughable, yet terrifying collection, America might have seriously blurred the line between reality and reality television with this election season. Trump has certainly mastered the art of the sound bite.