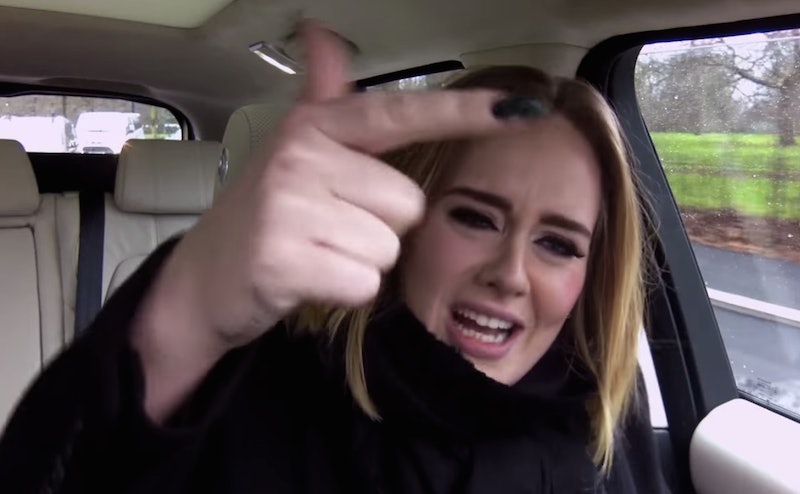 We should really just get used to the phrase, "Adele just broke a record," considering how often it's been happening since the pop star returned to the music scene with her 2015 album 25. Everywhere you turn, people can't get enough of Adele, and with that fan obsession comes record-breaking album sales, single sales, video views, and more. But even this new record broken might give her fans some pause: Adele's Carpool Karaoke has broken the late-night viral video record. In the first five days that the video of James Corden and Adele cruising around town singing a medley of her old hits combined with Nicki Minaj and the Spice Girls was on YouTube, it gained enough views to become the most-watched video that any late-night show since 2013. While Adele hasn't broken the lifetime record yet — which still belongs to Justin Bieber's Carpool Karaoke video — it's really only a matter of time, isn't it? I mean, her Carpool Karaoke was literally the best.

The video has racked up twice the views in its first week than Bieber's did, and gained even more views from Facebook, so I honestly can't imagine that the Biebs can hang on to that record for long. But what makes Adele's Carpool Karaoke just so good? Guys, what makes water wet? Just involve Adele in anything, and you've basically got the recipe for something amazing by default. If you somehow still need convincing, well, let me help you out.

Adele regaled us all with tales of how she was drunk for three days over Christmas, and her drunken stories sound a lot like your drunken stories except 10 times better because Adele is in them.

2. Spilling Her Tea On Herself

The most British sentence I've ever had to type, honestly. But Adele, holding an actual tea mug while in the car, somehow managed to spill some of it all over herself over the course of the carpool karaoke and ruin her coat. She was very upset about it, but she also chugged that tea like a pro.

Finding out that Adele is a Spice Girls fan, and listening to her sing "Wannabe," was one of the real reasons to tune into this videos, to be honest.

LOOK AT HER FACE.

Adele might not use that method at restaurants, or ever in life, but she should. Clearly it would be the most effective.

6. How Much Fun They're Having

You can tell that Corden and Adele have been friends for years, and it's absolutely adorable.

Even Nicki Minaj herself is a huge fan of Adele's cover.

Watch it again below, just because you can.

More like this
Shakira's Shady New Breakup Song Is Turning "Those Sour A… Lemons" Into Lemonade
By Stephanie Topacio Long
Twitter Wants To Dance With Anne Hathaway At Paris Fashion Week
By Alyssa Lapid
Hailee Kaleem Wright's Topsy-Turvy Path From MTV To Broadway
By Samantha Leach
Twitter Is In Awe Of Taylor Swift’s “Lavender Haze” Music Video
By Jake Viswanath
Get Even More From Bustle — Sign Up For The Newsletter
From hair trends to relationship advice, our daily newsletter has everything you need to sound like a person who’s on TikTok, even if you aren’t.