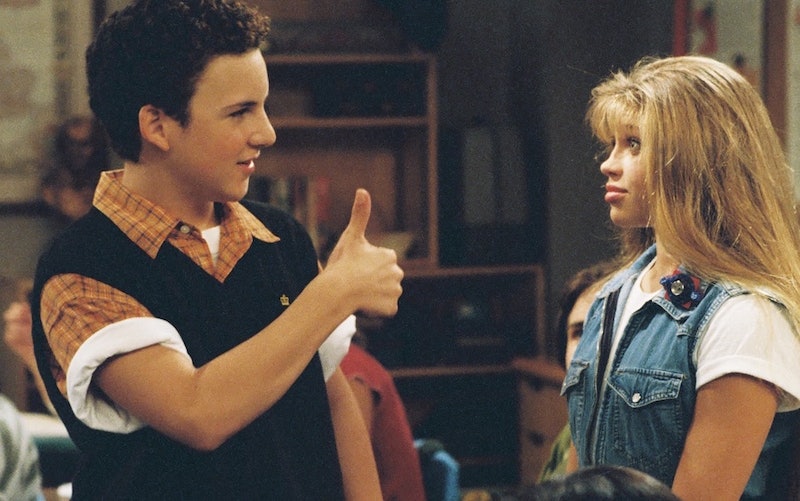 Listen, I watched the same show that all of you were watching. I did. I know all about the Shawn Hunter effect. Throughout the '90s, who didn't have a crush on Shawn Hunter, with his beautiful hair, leather jackets, sad past, and just-this-side-of-the-line bad boy behavior? However, I am here to tell you all today that we were watching the show wrong, way back when. Cory Matthews was the hot one on Boy Meets World, sexy in his utter averageness, his unmoving curls a beacon of decency, loyalty, and hilarity. There is a reason that everyone on the show was in love with Cory, and it wasn't just because he was the main character.

Cory was the kind of person who inspired loyalty in you, who made you want to be a better person. He believed in you when you didn't believe in yourself. He made mistakes, and then he learned from them. He worried about the same things that we all worry about: will our best friends be our best friends forever, will our girlfriends be the ones we're with for the rest of our lives, would things have turned out differently for us if we'd been raised with more skills and more opportunities, will our brothers care that we're not around when they go off to college? Being conventionally attractive is nothing. That's genetics. But what made Cory so hot went much, much deeper than that.

1. He Had An Amazing Sense Of Humor

And look at that balance! That poise!

2. He Had All The Smooth Dance Moves

OK, maybe smooth is the wrong word for it. But I certainly always enjoyed watching him bust a move.

3. His First Kiss Was Both Awkward And Magical

Perhaps one of Cory's most relatable moments, the first time Topanga kissed him was a moment that would live in infamy for how painfully awkward it was, and yet the beautiful relationship it subsequently led to. Tell me your heart doesn't skip a beat reflecting on this moment, and I will call you a liar.

4. He Believed In Divine Retribution

Sibling rivalry is a tale as old as time, and Cory never missed an opportunity to get his brother back for all the woes Eric heaped upon him. You know he'd be on your side if your older brother was picking on you, too.

5. But He Didn't Hold Grudges

Years after high school, Cory not only helped one of his bullies, Harley, get a job at the school, but he also named a merit award after another one of his bullies growing up. This man has a deep and beautiful capacity for forgiveness, you guys.

6. He Does So Much For Those Around Him

One of the facts most frequently overlooked by fans of Shawn Hunter is that so much of what is good in Shawn is a direct result of Cory's influence. Many times, Shawn has "fallen off the path," as it were, and it was always Cory who went after him and dragged him kicking and screaming toward the consequences that would force him to learn from his actions and become a better man. Shawn acknowledged many times that Cory was his better half, loved him fiercely accordingly, and pulled Cory back when he was diving off the ledge, too.

7. And He Loves Those Around Him So, So Very Deeply

Topanga doubted her relationship with Cory many, many times, but Cory knew they'd end up together in the end. And not in that Nice Guy way where he circled her like a vulture, but he gave Topanga the freedom and support that she needed to live her own life and make her own choices while also making it clear that he still loved her and would still fight for her. His unwavering faith in their love still touches Topanga to this day.

8. He Appreciated Topanga's Beauty In All Areas

He's talking about her butt. Like I said, all areas.

Despite the fact that "sexy" wasn't a word that Cory heard a lot, he still managed to keep his cool when Topanga gave him the compliment. (Well, and he couldn't wait to tell Shawn, but...)

Cory Matthews has never been cool. But it's that lack of coolness that makes him so cool. I mean, need I remind you that his best friends were Shawn Hunter ('nuff said) and Topanga Lawrence (best grades in the school, most popular, etc)? Clearly, he had a little somethin' somethin'.

I could fall in love with Cory based on how he says puberty alone.

12. He Took His Friendships As Seriously As His Relationships

Quite honestly, Cory and Shawn were in a relationship, in most senses of the word. It even got to the point that, in Girl Meets World, when Topanga pointed out that she and Cory had rings, Cory gleefully told his daughter Riley that Shawn had given him his ring years ago, but Topanga wouldn't let him wear it. Yeah. Her whole life.

OK, so he was drunk in this moment, but that didn't change the fact that Cory recognized how wonderful it was that Shawn was always there for him when he needed him, at his lowest emotional points, and rewarded him accordingly.

So was Cory Matthews hot? Uh, duh. Debate over.