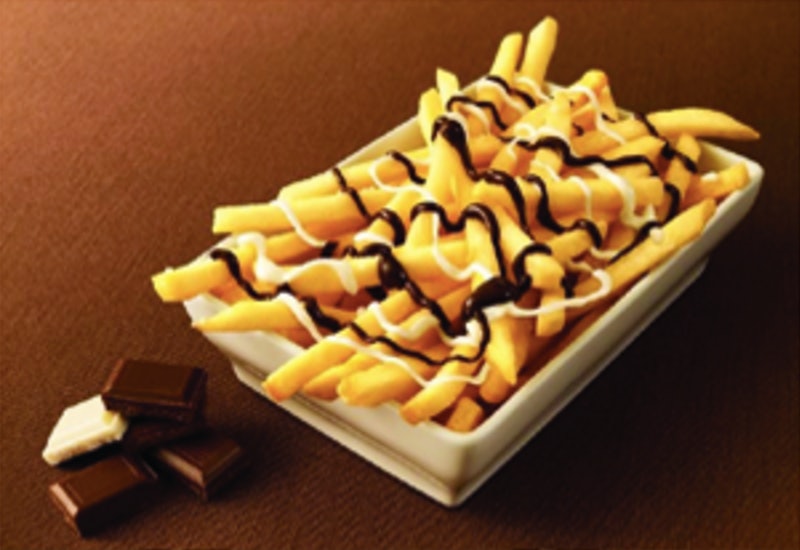 An early April Fool's joke or a childhood dream come true? The newest in dessert innovation comes to us today from McDonald's new McChoco Potato, which is basically exactly what you're imagining: a bunch of fries slathered with chocolate sauce. The company announced the menu addition on the McDonald's Corp Twitter page, writing above the confusingly delicious picture, "Everybody has a sweet and a salty side. Now, with McChoco Potato, you don’t have to choose!"

I'd say "if you were one of those kids who dipped your french fries in your McFlurry, clap your hands," but I'm afraid that the resounding shake would lead to the early eruption of several active volcanos. We have known as a human race that these fries were destined for so much more than ketchup and mustard, and now thanks to this twist, they are finally getting the respect that they deserve. The only problem? ... As of right now, you can only get them in Japan. They start rolling out the new dessert fries on January 26, though, so at the very least they've given us ample time to sprout gills and swim to their sweet and salty shores.

Here's a sneak peek of what the McChoco Potato looks like:

As a connoisseur of other similarly unconventional chocolate pairings, including and not limited to every brand of chocolate covered potato chips available on the Eastern seaboard and a block of "chocolate-infused cheese," I am so on board with this that it hurts. The fries in question will be dribbled with two kinds of sauce — a tradition chocolate sauce and a white chocolate sauce. The one thing they will not be dribbled with are my tears of FOMO, here in the US, approximately a bajillion miles away.

No word on whether or not this product might extend itself to the US, but Bustle has reached out to McDonald's for any information regarding its release. Fingers crossed that it's so wildly successful in Japan that they pretty much have to release it here — that, or they just give us the french fry-infused McFlurry that humanity has been waiting for since day one.

In the meantime, be sure to enjoy the latest menu addition that has definitely hit the US (SUCK IT, ocean): McDonald's new mozzarella sticks. While they are not covered in chocolate, they are still every bit as much worth your time, and I am speaking as a person who has consumed more than her fair share of them in the last week. Bon appetit!