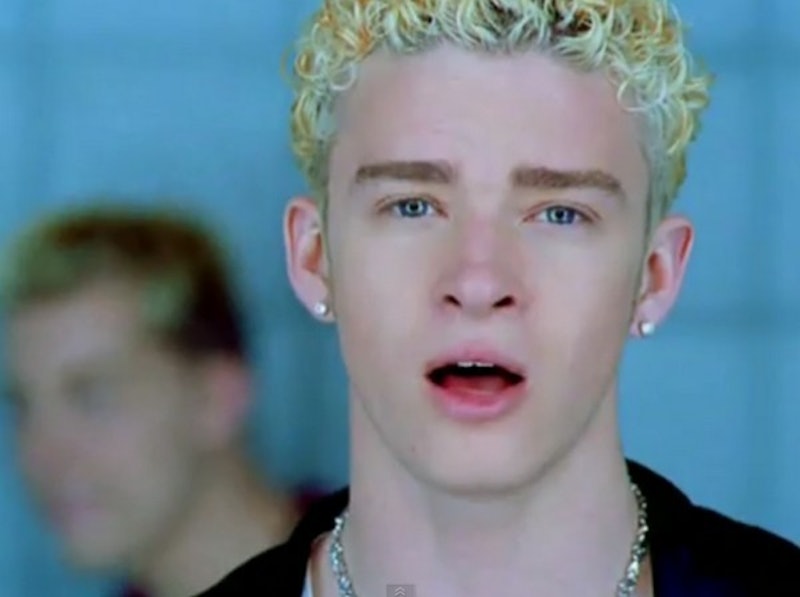 If there's one thing you just have to love about the '90s it has to be the music. But what made the music of the '90s even better? Well, the completely cheesy, over-the-top '90s music videos that went along with the decade. Whether the video had some '90s-styled visual effects, a ton of longing gazes into the camera, or an artistic vision that was just a little bit too cliche, '90s music videos are certainly ones to remember... and maybe laugh about. Because let's face it: These artists were trying so hard to be the latest definition of sexy in the era of frosted tips and colorful scrunchies, and music videos were the epitome of all that metaphorical screaming for attention.

However, when looking back at the videos now, I've realized something. Ranking '90s music videos is a totally futile task since — trying too hard or not — each one serves its own, unique purpose in the course of pop culture as we know it. (In fact, from the fashion to the dance moves to the story lines, many of the contemporary artists we all obsess over seem to be alluding to the '90s in their current work, because, as ridiculous and outrageous as the '90s scene was, it was also amazing.) With that in mind, and with no favoritism or particular order, here are some of those very over-the-top, unforgettable '90s music videos that were trying about as hard as a teenage girl reaching for Justin Timberlake from the front row of an *NSYNC concert.

Who could forget when Slim Shady first broke out on the scene? Well, nobody. Because he was so in our faces that he made damn sure we did not forget what his name was. And with the strange, confusing cultural references throughout the video... he may just haunt your dreams.

Britney basically created what it meant to be a sexy schoolgirl. Between her glances into the camera to dancing on the desk, she basically lived out every high schooler's dream in this video... well, every dream that was totally never going to happen. We got it, Brit. Loud and clear. You're sexy. Did you need pink pompom pigtails to tell us that?

Did you know Hanson was like, really, really cool? This music video sure did. Obviously, they totally redefined what it means to use special effects. I mean, move over, Industrial Light & Magic, amirite? Still, despite all of this video's cheesiness I'm still kind of leaning towards the cool verdict. Sue me.

This music video had it all (like maybe too much of it all): Between the glass reflection, their dance moves, and the futuristic influences. And yet, these guys were simply a '90s dream. All those bells and whistles managed not to distract from that.

To paraphrase another '90s icon Friends' Chandler Bing: Could they BE any more in your face? But trying too hard or not, it's impossible to deny that after seeing this music video, '90s music fans everywhere wanted to get with the Spice Girls... and their friends.

Before her sexy early-2000s stint with the song "Dirrty," Christina Aguilera was already making her mark as a sexpot — with her breakout hit, "Genie In A Bottle." And something about the crop top, all that fringe, and overly suggestive writhing in sand shouldn't have worked on pop fans everywhere. But it did. Just like magic.

Yes, that music video is in fact over seven minutes long — ah, the true sign of a try-hard video. What? You don't think we need seven minutes to get to the point? You're right. He won't do that. Don't argue with him.

Mandy Moore knew how to give fans #squadgoals before squad goals were even a thing. But driving a VW Bug without looking at the road, doing group dance routines in a diner parking lot, and singing in the middle of an empty swimming pool filled with active skateboarder all reek of someone who's trying so, so, so hard to get our attention. Or wait, maybe that was the point of the video?

OK... This '90s video has to be one of my personal favorites when it comes to absolute, unabashed absurdity. I'm pretty sure that literally being in a "One Flew Over The Cuckoo's Nest"-styled mental facility and crying over a girl is just not going to really woo anyone. But, hey, it's the '90s, right?

Seriously, don't get in his way. He will just keep walking. Obviously, because he's on one serious emotional mission. Do you get how serious he is? Maybe he should walk some more.

That tall hair, smooth voice, and super fly dance moves were to die for. But, only — and this is important — in the '90s.

BRB. I'll just be watching these videos with tears of laughter streaming down my face for the next nostalgia-filled hour.

More like this
Cruz Beckham Teased New Music With An Adorable Nod To Mom Victoria Beckham
By Stephanie Topacio Long
Zach Gilford Admits He Forgot Taylor Swift's Name When He Starred In Her Music Video
By Jake Viswanath
Britney Spears Shared The Real Reason She Shut Down Her Instagram Account
By Brad Witter
The Jonas Brothers' New Album Has A Very Meta Name
By Alyssa Lapid
Get Even More From Bustle — Sign Up For The Newsletter
From hair trends to relationship advice, our daily newsletter has everything you need to sound like a person who’s on TikTok, even if you aren’t.