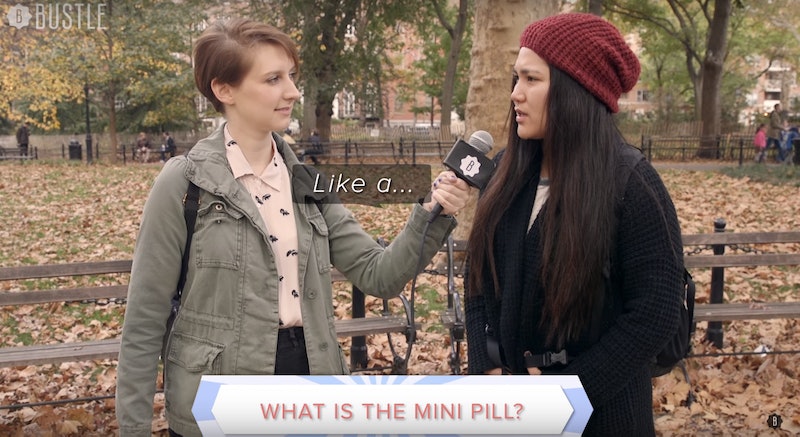 It turns out that birth control, despite the best efforts of sex educators, organizations like Planned Parenthood, and, well, people like me, still has a bunch of misinformation attached to it. Which is no good: we all need to be informed about what our choices are and how they work, to be able to make the best contraceptive selection for ourselves. It's not enough to just yell "No Babies!" and pick a contraceptive method out of a hat. (I wish.)

So Bustle teamed up with awesome Planned Parenthood physician Dr. Gillian Dean in a new video, to find out what young women really believe about their birth control, and fix a few pretty serious myths and misconceptions along the way.

Yes, this stuff matters. It's not a good idea to do anything to your body without understanding how it works, and even if you think you know how your particular birth control functions, you might still be surprised. Plus, the market is widening all the time: you now have two different types of IUDs, two types of pill, an arm implant and the NuvaRing, all with their own unique methods and risks. With more choice means more information and more possibility for confusion and possible accidents. And we don't want that!

Here are seven things you really need to know about the birth control products around at the moment. You may be surprised, and a bit shocked, at how much you didn't know about your baby-prevention strategy.

1. No, The Pill Does Not "Trick" Your Body Into Thinking It's Pregnant

Incorrect, but a seriously common idea: the Pill doesn't actually make your body believe it's having a baby already. It's actually composed of two different hormones, estrogen and a synthetic version of progesterone (called progestin), and they interact to do something quite remarkable. They prevent you from ovulating, which thickens your cervical mucus to make it into a sperm-barrier. It prevents sperm from actually reaching your eggs and having any chance at fertilizing them. Dr. Dean points out for us that you stop ovulating when you're pregnant too, but that's basically the only similarity between being pregnant and taking the Pill.

2. The Hormones In The Pill Fulfil Very Different Purposes

The two different hormones in the normal Pill, estrogen and progestin, do different things. It's the progestin that actually does the heavy lifting: it's the one that puts the brakes on the ovulation cycle and causes the thickening in the cervical mucus that operates as egg protection. Estrogen is there to keep your cycle on track and controls bleeding. Early birth control pills had high levels of estrogen, but it was discovered that too much causes serious side effects, so there's a much lower level in today's Pill (though it's still much more estrogen than would normally occur in your body).

3. The Mini-Pill Only Contains One Hormone

If you're on the mini-pill, you're actually only getting a dose of progestin rather than an estrogen-spiked combination. You'll be put on it if you can't have extra doses of estrogen for medical reasons, which include high blood pressure, or intense side effects from taking estrogen. This is one very important reason why it's important to be honest with your birth control provider about any other medical conditions you have, so they can help you pick which one's right for you.

4. Condoms Rarely Break, But You Can Help Prevent Accidents

Condoms keep things secure 98 percent of the time, but there is the possibility of failure. And Dr. Dean points out some very easy ways to ensure you do the utmost to make them function well. Point one: open the packet properly. No teeth, no scissors, no fingernails, no bread knife (as one friend's boyfriend memorably tried in a moment of desperation). Point two: the correct lubricant is seriously important. Only use water based lubrication if you're having sex with a latex condom. Oil-based lubricants actually interfere with the material of the condom, eroding it and increasing the possibility of a breakage. Vaseline and oils of any kind are out.

5. You Need A Depo-Provera Shot Every Three Months

If you're considering getting the Depo-Provera shot as an alternative to birth control pills or IUDs, there are a few things you should know. The main one is that it's not a leave-forever-get-on-with-your-life birth control system; it's a medium-range one, meaning that you have to go in for a new shot once every 12 weeks. If you miss an injection, you stop being protected, so it's only for women who can make the organizational commitment to a doctor's appointment regularly (and it's not great if you're the sort of person who forgets stuff like this).

6. You Have A Few IUD Choices

Of the long-range birth control systems, the IUD or intrauterine device is probably the most famous. But did you know that there are two types? One is made of copper, is non-hormonal, and can stay in your uterus for up to 10 years without needing to be disturbed or updated. The other is the hormonal IUD, which releases a form of our old friend progestin into your system to perform its magic trick with ovulation and cervical mucus. It's got a shorter life span, though: depending on the type, it can last between three and five years.

7. Contraceptive Implants Live In Your Arm, Not In Your Uterus

This one may be slightly confusing, but the other contraceptive implant, Nexplanon, doesn't live in your uterus like the IUD: it actually goes in your arm and is only the size of a matchstick. It uses etonogestrel, which is another variation of progestin, and is workable for about three years. It can be put in at any point in your menstrual cycle, but it often causes you to stop having periods altogether, so if you like that reassurance, it's likely not for you.

More like this
The 19 Best Tweets & Memes About Bisexual Awareness Week
By Lexi Inks
You Can Get Custom Podcast Recs From Spotify Based On Your Zodiac Sign
By Brittany Beringer
This Psychological Effect Might Be Keeping You From Hitting Your Goals
By Lexi Inks
Wanna Try Hinge's New Video Prompt Feature? Here Are 7 Tips
By Lexi Inks
Get Even More From Bustle — Sign Up For The Newsletter