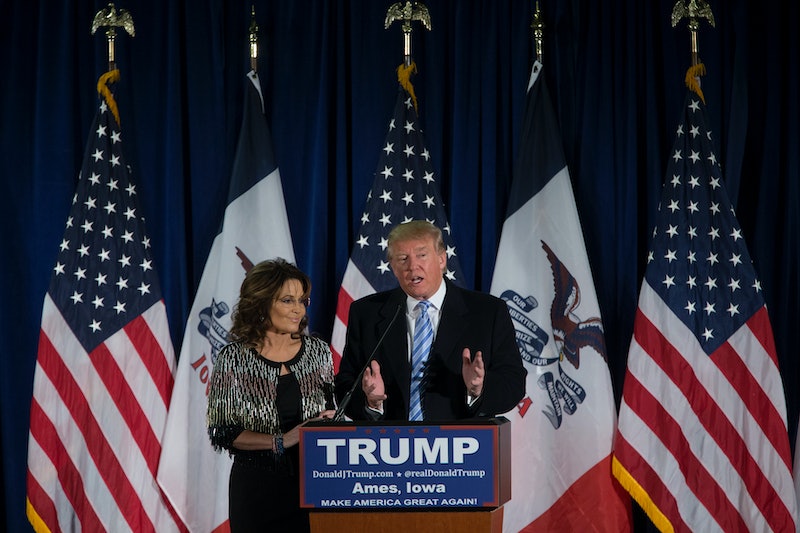 It's not exactly surprising that Sarah Palin is now backing GOP frontrunner Donald Trump. The two appear to have a fairly positive relationship, and each have admired the other's professional ambitions for some time. What is rather odd is the fact that the former Alaska governor may have foreshadowed her endorsement of the candidate on Saturday Night Live in 2015. Palin supported Trump on SNL 40 last year, making an appearance during an audience Q&A segment at the beginning of the show. Host Jerry Seinfeld fielded questions from the likes of former SNL hosts and alums, including Larry David, John Goodman, and Tim Meadows.

Seinfeld called on Palin toward the end of the segment, jokingly addressing her as Tina Fey, who had assumed the role of the politician while working as a cast member on SNL. Fey has occasionally returned to the show to reprise the portrayal, which began during the 2008 election. For example, she returned as Palin when she co-hosted an episode with fellow former castmate Amy Poehler this past December. The comedic treasure trove that was Palin's failed campaign as running mate to presidential nominee John McCain led the actual Sarah Palin to eventually make her own appearance on the show. She asked Seinfeld this question on the Feb. 2015 episode:

Just curious, Jerry, how much do you think Lorne Michaels would pay me if I were to run in 2016? Okay, just hypothetically then, what if I were to choose Donald Trump as my running mate?

Mother Jones DC editor David Corn first brought this eerie bit of foreshadowing to the world's attention. While it may not be exactly accurate, as Palin did not attempt to run for president, it may not be far off. After she endorsed Trump at an Iowa State University rally Tuesday, the real estate mogul appeared on NBC's Today to discuss the announcement. The Donald said that he has yet to consider who his running mate may be if he ends up nabbing the Republican nomination. Nonetheless, he said that he'd readily take Palin on to play a part in his administration, but only if she's interested:

She could play a position if she wanted to. I mean, I don’t think she’d want to do it, and I really don’t get into it right now because — that question is always asked of me, who do you have in mind. And I don’t even think about VP right now, and I just want to win. I’ve always been a closer, I get the deal done, I have to win before I start thinking about that.

Since resigning as governor of Alaska shortly following the 2008 election, Palin has enjoyed a career in broadcast journalism, serving as an analyst for Fox News up until last year, and at one point even having her own online news channel. It's unclear whether she wants to return to politics. Perhaps that answer is hiding in some SNL footage.