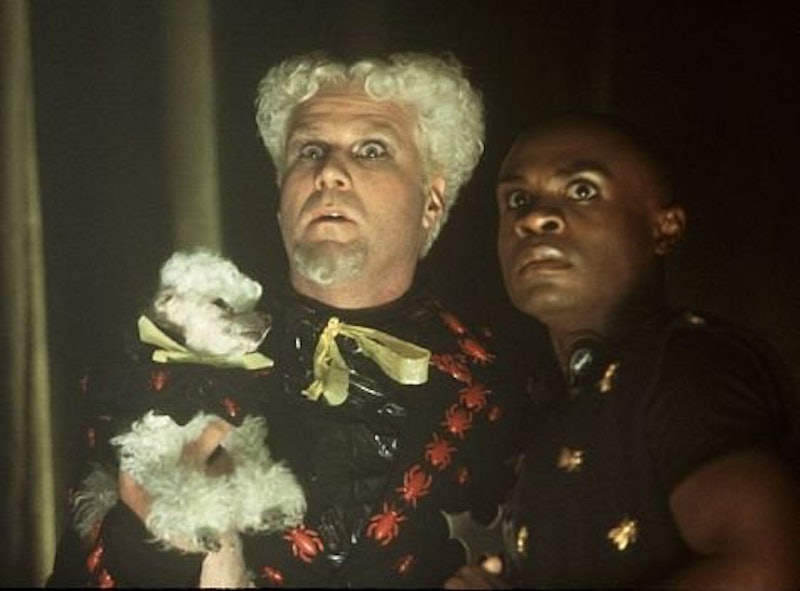 Zoolander was a great comedy for a number of reasons. One, it had an amazing cast with three of the best comedic actors of its era in the lead roles: Ben Stiller, Owen Wilson, and Will Ferrell. Two, it was a ruthlessly clever satire on the fashion industry, celebrity culture, and the media. Three, it had an actual engrossing plot that consisted of a hell of a lot more than a bunch of jokes loosely strung together. And most importantly, Zoolander featured great quotes and memorable moments that have become a larger part of popular culture. Because of the film's now legendary status, Stiller and company would be crazy to not reference some of these classic bits in the sequel, Zoolander No. 2 , when it premieres next month.

The new film's trailer definitely looks like its hoping to follow in its predecessor's footsteps by masterfully blending smart commentary ("She's hot, I trust her") with dumb gags (Mugatu ripping off his muscly, tattooed skin suit), but how many callbacks to the original film should fans expect? Obviously, the movie shouldn't include too many Zoolander references, because then the film runs the risk of coming off as a ripoff rather than something new and different. But it needs to contain some to satiate fans' nostalgia. So out of the dozens to choose from, here are 11 Zoolander quotes that I think the sequel should reference.

The trendy drink of choice for male models everywhere definitely needs to make a comeback, though maybe now it should have some kale thrown into the mix.

"It doesn't mean that we too can't not die in a freak gasoline fight accident."

I think we all know someone who's died in a freak gasoline fight accident, and I doubt Derek Zoolander will go the entire movie without mentioning his fallen friends.

"What is this? A center for ants?"

Surely the sequel will pay a visit to The Derek Zoolander Center For Kids Who Can't Read Good and Who Wanna Learn to Do Other Stuff Good, Too... right?

"It's that damn Hansel! He's so hot right now!"

Hansel's hotness was a running gag in the first film, so now that he's all washed up someone had better comment on him being not so hot.

"I'm pretty sure there's a lot more to life than being really, really, ridiculously good looking."

Does Zoolander still consider himself to be really, really, ridiculously good looking? Hopefully fans will find out in the sequel.

"You can read minds?"

Zoolander says this to Matilda after she reveals that she became bulimic in middle school. I really hope he still doesn't know what the word actually means.

"I am the inventor of the piano key necktie!"

Mugatu's claim to fame is just as funny now as it was in 2001, and it does get a slight nod in the trailer as a piano key necktie tattoo on the fashion mogul's muscle suit.

"They’re in the computer?"

God I hope Hansel hasn't figured out how computers work yet.

"And when I say brother, I don't mean, like, an actual brother, but I mean it like the way black people use it. Which is more meaningful I think."

Here's hoping that Zoolander remains as culturally ignorant in the hyper-PC culture of 2016 as he was back in 2001, which will make his air headed comments stand out even more. The film's inclusion of Benedict Cumberbatch's androgynous model "All", and Zoolander's reaction to the character, seems to indicate that he will be.

Hopefully one of these old dogs still has a good walk-off performance left in them after all these years, though without David Bowie maybe it would be best if this one is retired.

Who knows how many of these hilarious quotes Zoolander 2 will reference when it premieres, but hopefully it will allude to at least a few of them — while also coming up with a whole slew of brand new lines that I'll be quoting for years to come.