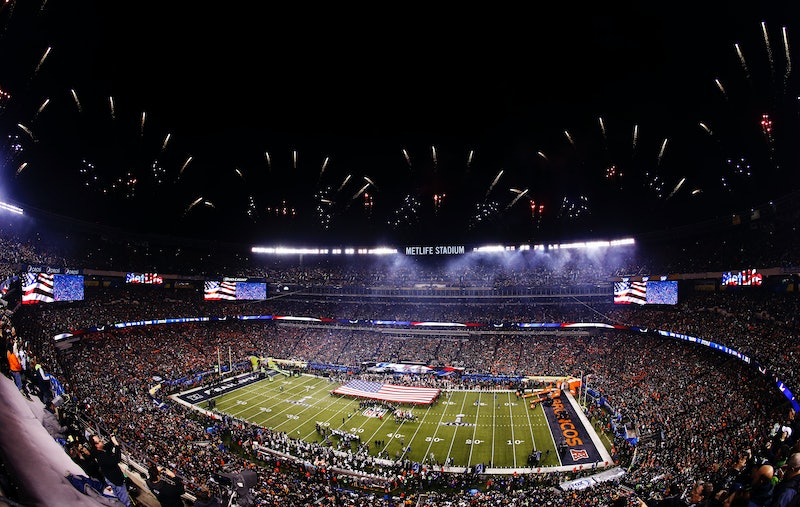 If there’s one thing that Super Bowl commercials have purported throughout the years, it’s that women have no place in football — unless they’re tall, beautiful, half-naked models. We get it, advertisers, you want to cater to the men watching the big game while tapping into women’s supposed fantasies of their ideal selves. But guess what? Nearly 50 percent of the people who watch the Super Bowl are women and girls, according to The Representation Project, which helped popularize the #NotBuyingIt hashtag on Twitter in response to sexist commercials during 2013’s game.

So why does the Super Bowl continue to get away with sleazier and more offensive commercials year after year? The good news is that it seems the majority of people who are fed up with the types of ads seen on game day are finally getting recognized. Twitter users are gearing up for another assault of #NotBuyingIt upon marketers on Feb. 2, and the notorious GoDaddy commercials are finally featuring Danica Patrick doing something besides taking her clothes off.

We set out to find if there have ever been any non-sexist — or dare we say, feminist? — commercials prominently featuring women during the modern age of the Super Bowl. Here’s a roundup of the good, OK, and just plain ugly ads:

WILL GOLDIEBLOX GET A SUPER BOWL SPOT?

For a refreshing change of pace, software company Intuit set up a competition to feature a small business ad during the Super Bowl. We won’t know the outcome until game day, but GoldieBlox — which makes construction toys geared toward girls — is one of the companies in the top four slots.

In what is arguably the most female-friendly Super Bowl ad ever, Dove aired a spot during the 2006 game as part of its “Real Beauty” campaign. It addressed the insecurities that girls face, such as “thinks she’s ugly” and “afraid she’s fat,” with a kid version of the song “True Colors.” It’s corny, but it works. Even though we have to remember Dove is still a huge corporation focused on making money, they get a big tip of the hat for the valiant effort.

Everyone’s best friend Amy Poehler showed up during a break in the 2013 Super Bowl to add some awesomeness to a Best Buy commercial. It was just nice to have an ad featuring a woman that didn’t make me want to curl up on the floor in the fetal position. And it was actually funny — she can use the word “dongle” all she wants, as far as I’m concerned! See, you don’t have to take your clothes off to get noticed.

DADS CAN PLAY DRESS-UP, TOO

In yet another ad that appeals to daddy’s love for his little girl, a man gladly plays “princess” with his daughter instead of playing a football game with his friends, donning a dress and makeup — the whole nine yards. The catch? Dad only becomes a fashionista so he can score some of his kid’s Doritos.

CALVIN KLEIN SWITCHES IT UP

Do you really think Super Bowl ads are only focused on the male gaze? Think again. This 2013 Calvin Klein ad for its Concept underwear collection shows some very gratuitous chiseled ab action, proving that men can be overly objectified too (no matter how drool-worthy it is)!

I’m not entirely sure what to think of this 2012 John Stamos ad for Oikos yogurt. While the woman is portrayed as strong and intimidating, she only head-butts Stamos (that tease) because she MUST HAVE YOGURT.

There are just SO MANY sexist Super Bowl commercials that it hards to narrow them down. But GoDaddy.com has been responsible for the most egregious offenses by far (surprise, surprise). Whether they got spokeswoman Danica Patrick to paint a model’s naked body in 2012, showed her slyly unzipping toward her “beaver,” or hinted at numerous “uncensored” versions online, Go Daddy has become synonymous with trashy Super Bowl commercials.

The most shocking — and pretty gross — commercial may be “The Kiss,” which was a closeup of model Bar Rafaeli and a nerdy computer programmer making out. After the sloppy, slurpy kiss — which reportedly took 60 takes to perfect — many people took to Twitter to express their outrage. The actor who played the nerd, Jesse Heiman, told CNN, ”I’m glad to represent the fat guy or the nerd guy. All those stories about people getting bullied, I’m glad to represent them and show that you can accomplish anything if you dream big.” DREAM BIG.

During the 2009 Super Bowl, Bridgestone aired a commercial with Mr. and Mrs. Potato Head. Cute? Not so much. Mrs. Potato Head is portrayed as an annoying, nagging wife, and when her husband slams on the brakes, her mouth pops out and rolls down a cliff, rendering her speechless. Because all every man wants is just a silent wife, amirite fellas?

This 2003 commercial from Miller Lite pits two ample-busted women against each other, debating the “tastes great!” and “less filling!” qualities of the beer. It quickly escalates into a catfight where they rip each other’s clothes off in a water fountain and a mud pit. Oops. At the end of the ad, we find out that it’s all a dream — but the storyline quite possibly set back the women’s movement by about 100 years.

Model Kate Upton’s boobs are so powerful that she doesn’t have to pick up a finger to wash her Mercedes-Benz — she just gets all the guys around her to do it. (She just has to worry about walking in slow-motion and flipping her hair around.) "This ad [reinforces] for millions of wives, daughters and sisters across the country that you use your sex appeal to get what you want," complained the Parents Television Council. "If anything, this ad proves that we’ve regressed rather than progressed over the last several years."

TELEFLORA PROMISES YOUR LADY WILL PUT OUT

Hey guys, you know what the Super Bowl means? That’s right, Valentine’s Day is just around the corner! So Teleflora reminded men in 2012 to get their ladies something special for the holiday, because as model Adriana Lima tells us, “Guys, Valentine’s Day is not that complicated: Give, and you shall receive.” ::wink, wink:: UGH.

Readers, what are your picks for most sexist Super Bowl commercials? Can you think of any empowering ones for females? Will you be participating in the #NotBuyingIt campaign this year? Let Bustle know on Twitter or Facebook.