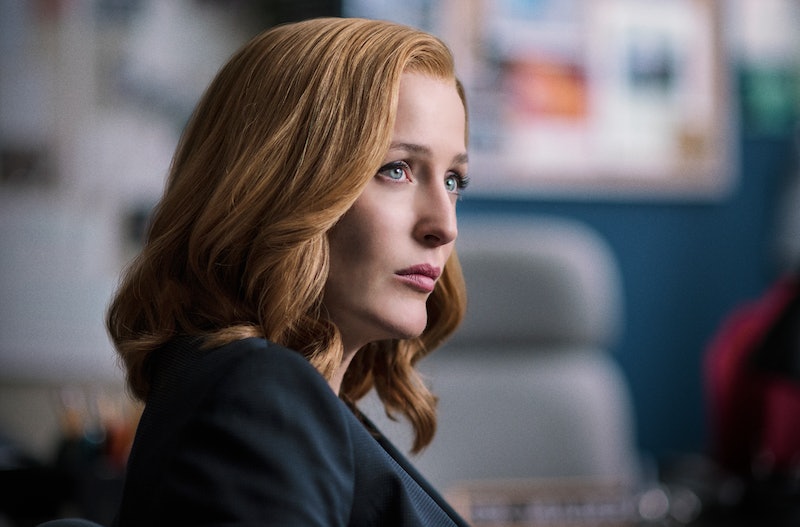 Full disclosure: unlike many of my fellow X-Files obsessives, science fiction isn't generally my genre of choice. But, as a self-professed TV fanatic who has marathoned more shows than I care to admit, this one has a very special place in my heart. When I first discovered The X-Files , it was purely by chance. The show was already off the air and I was a sophomore in high school, on extended medical leave from both school and ballet (the two most important things in my life at that point) with no idea how to occupy my time. So, I channel surfed until I happened upon The X-Files, never expecting that it would influence me for years to come. But I quickly learned that The X-Files' Dana Scully is a feminist role model who gave young women like me someone to look up to, standing out on TV for her strength and empowerment.

The partnership between Scully and Mulder will undoubtedly go down in history as one of the best TV pairings ever — and, although I'm a 'shipper through and through, I think their professional dynamic is significant and important. It's no secret that the two FBI agents are polar opposites, which is part of why they work so well together. But, they don't fall into the stereotypical gender roles that we see far too often when men and women are partnered as detectives or FBI agents. It's a common trope for a woman to become consistently emotional about her cases, often to the point that it clouds her judgment and leads her to recklessly compromise her investigations. This is true of many TV investigators, such as Sara Sidle on CSI and Sarah Linden on The Killing.

But in The X-Files, Mulder is the one who consistently needs to reign in his emotions, while Scully acts as the voice of reason and logic. It is certainly understandable that Mulder often becomes emotional about their work — he's driven by a personal trauma, the abduction of his younger sister when they were children. Mulder, too, is a deeply inspiring, complex, and compassionate character. Still, it's refreshing to see the female half of a pairing be the even-keeled, logical voice of reason — because it doesn't happen nearly enough on TV.

Gillian Anderson's Scully evolves as a character throughout the series. She never loses her scientific, skeptical mindset — after all, that's one of her defining characteristics. But, she does (very slowly) begin to entertain the idea that not everything can be explained away through science and logic. Mulder's mission and journey are clear from the moment we meet him and they don't change much, if at all, throughout the series. But Scully often challenges her own preconceived beliefs and notions, inspiring viewers to do the same.

Furthermore, her presence in the X-Files gives the unit the credibility it lacked when Mulder was working solo, proving how much other FBI agents respect her judgement and skills. While Mulder is full of conspiracy theories with little to back them up, Scully provides the necessary science and logic. It's only when she joins the X-Files that Assistant Director Skinner begins to take the unit seriously. And Mulder recognizes this, at one point telling her:

You saved me! As difficult and as frustrating as it's been sometimes, your g*damned strict rationalism and science have saved me a thousand times over. You've kept me honest... you've made me a whole person. I owe you everything, Scully.

But her scientific, logical ideology doesn't mean that she's out of touch with her emotions — and Scully helps to demonstrate that these two things are not mutually exclusive. She has moments of heartbreak, despair, and vulnerability, and is honest about goals she has outside of her career. Specifically, she wants to be a mother and grieves in earnest when she experiences motherhood only to have to give up her child. As she and Mulder become closer, first platonically and then romantically, she allows him to see the side of her that exists beneath her tough, calm exterior. Since it's a sci-fi show with massive doses of action, there are plenty of instances where they have to rush to each other's rescue — but there's no power imbalance and, despite all the violence she endures throughout the show, Scully is never the damsel in distress.

In addition to displaying both her intelligence and emotions, The X-Files also explores Scully's faith, deepening her character even more. Her relationship with Catholicism was something that I related to on a personal level when I first watched the show, and it continues to be important to me. Religion isn't commonly explored on TV in the manner it was on The X-Files — because it's not black and white for Scully. She is, above all, a scientist who seeks to find a logical explanation for everything. But, she never turns her back on her faith and she seeks comfort in it in her own way — not the way the institution tells her to.

Scully isn't a conventional Catholic in the sense that she dutifully attends church every week — she defines the faith for herself and her spirituality evolves along with her character. Like Mulder, she wants to believe — but she doesn't do so blindly. Scully's faith is also symbolic throughout the show. While she's missing, Mulder wears her cross as a talisman and then puts it back on her when she's in the hospital recovering. In the series finale, the two discuss what they want to believe and one of the final shots shows Mulder reaching for her necklace. I never did make my confirmation, but because of Scully I thought twice and didn't reject faith altogether. Instead, I acknowledged that while I have issues with aspects of the Catholic church, I could still be in touch with my own, feminist form of spirituality that's both deeply important and personal to me.

While Scully influenced my faith, she has also influenced other women's ambitions. "The Scully Effect" is a term often used to describe the character's impact on women entering STEM fields, described in detail by Yes! Magazine as follows:

Named for Special Agent Dana Scully, the medical doctor and FBI agent who was one half of the investigative team on "The X-Files", the Scully Effect accounts for the notable increase in women who pursued careers in science, medicine, and law enforcement as a result of living with Dana Scully over the nine years "The X-Files" ran on Fox.... The show has been off the air for more than a decade. Yet the character of Dana Scully remains a powerful example of how a dynamic female character whose primary pursuit is science—not romantic relationships—can have a lasting impact on our culture.

Anderson has also discussed The Scully Effect with fans in 2013, as reported by Vulture. "It was a surprise to me, when I was told that," she said. "We got a lot of letters all the time, and I was told quite frequently by girls who were going into the medical world or the science world or the FBI world or other worlds that I reigned, that they were pursuing those pursuits because of the character of Scully. And I said, 'Yay!'"

Whether you pursue science or not, there's no denying that Scully is a feminist role model thanks to her resilience, emotional honesty, ambition, and assertiveness. When The X-Files revival kicks off on Jan. 24, many aspects of the show will undoubtedly be a little different from the original series — but I'm confident that Scully will still be the same complex, inspirational character that she was when the show debuted in 1993.

More like this
Grammys Host Trevor Noah Made Adele's Dream Of Meeting The Rock Come True
By Brad Witter
'The Last Of Us' Episode Schedule Competes With The Super Bowl & Oscars
By Brad Witter
Pedro Pascal Barely Got Through The "Lisa From Temecula" 'SNL' Sketch
By Stephanie Topacio Long
Melanie Lynskey Plays A “Ruthless Leader” In 'The Last Of Us'
By Brad Witter
Get Even More From Bustle — Sign Up For The Newsletter
From hair trends to relationship advice, our daily newsletter has everything you need to sound like a person who’s on TikTok, even if you aren’t.