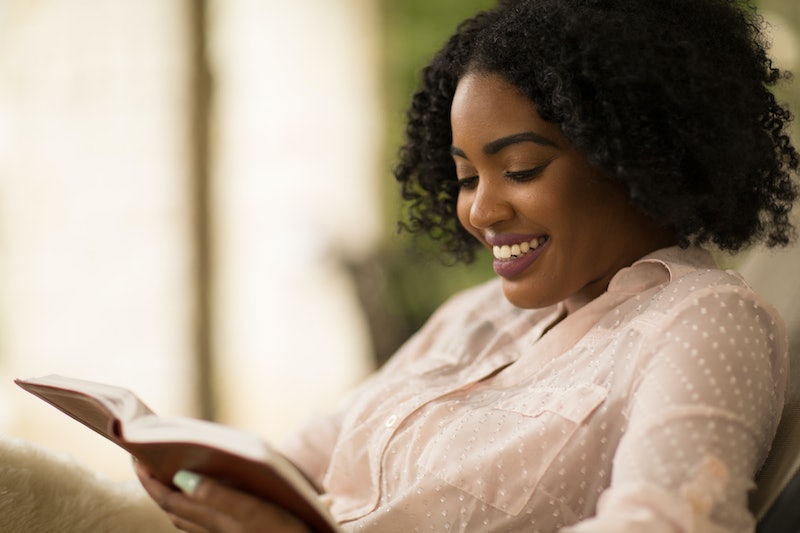 No one should ever feel ashamed for any of their book reading choices, but when talking in good fun, we all know those "guilty pleasure" books. Nothing lights up the happy parts of my brain faster than a good one. I love to read my Tolstoy and my Austen; I've been perpetually reading Infinite Jest for the past two years to the point that I'm pretty sure I'm always reading it on some metaphysical level, but nothing gets me more excited when I can find that lovely, candy, soap opera-y goodness in the library or my local bookstore. They are fun, they are addictive, and they are a perfect palate cleanser between more "serious" endeavors, whether it's work, homework, or something else.

There's no reason to write off what have been called "guilty pleasure" novels, on the contrary. There are so many reasons why these guilty pleasure reads are worth it, and because app creators are beginning to take note of these kinds of readers, the landscape of this particular genre might be poised to change.

However, until that happens, there still remains loads of books out there just waiting to draw you in. I've compiled a list of 13 of these guilty pleasure reads just in case you need a couple of recommendations. From vampires to debutantes, teenagers to twentysomethings, there's plenty of options to choose from. Love being addicted? Most of these books are the beginnings of series, so when it comes to your guilty pleasure reads, you'll be set!

If sexy urban fantasy is your go-to, Guilty Pleasures is a great place to start. Kicking off the entire Anita Blake Vampire Hunter series, Guilty Pleasures is such a guilty pleasure that it's in the title. Anita Blake is a vampire hunter and necromancer, mandated by law to take out vampires if they get to be too dangerous. However, someone is taking out innocent vampires, and it's up to Anita to team up with the sexy French vampire Jean-Claude to get to the bottom of things. With the 25th installment coming out in June, this series could provide your guilty pleasure reads for quite some time.

Spawning an entire series, a spin-off series, as well as a TV show that's a guilty pleasure in its own right, Gossip Girl centers on a mysterious figure who seems to know everything about the scandalous lives of a group of affluent teenagers that live on the Upper East Side. Blair Waldorf has been the queen bee ever since original Manhattan it-girl and best friend Serena van der Woodsen mysteriously vanished to boarding school the year before. Now, Serena's back, and she's harboring a secret about Blair's boyfriend Nate that might tear everything apart.

With her writing style and compulsively readable plots, pretty much any Jodi Picoult novel could make this list. Salem Falls tells the story of prep school teacher Jack St. Bride, a man who has moved to the New England town of Salem Falls in order to rebuild his life after a female student's crush went awry. Connecting with Addie Peabody, the owner of the local diner, things seem to be looking up for him, that is, until four teenager girls shatter his life once more with a dangerous allegation.

4. Flowers in the Attic by V.C. Andrews

If there could ever be a "classic" guilty pleasure, this book would be it. The four Dollanganger children once led an idyllic life with their parents, until their father dies and their mother shuts them in their grandmother's attic for years. Cathy and Chris try to take care of their siblings as best they can, and to make matters worse they are beginning to develop strange romantic feelings for each other. Full of death, betrayal, and love that's wrong (even though they don't want to be right), you might remember reading Flowers in the Attic when you were in middle school (we all did), but this soap opera-y read is definitely worth another look with adult eyes.

College freshman Abby Abernathy is on the run from her dark past and is perfectly content to start her academic career by keeping out of trouble, that is until she meets Travis Maddox. He's tattooed, charming, and spends his evenings winning money in a secret fighting ring. He's everything she isn't looking for in another human being, but Travis worms his way into her life with a simple bet: if she wins Travis remains abstinent for a month, if he wins she has to live with him for that same amount of time. The rest, as they say, is guilty pleasure history.

6. The Luxe by Anna Godberson

This one may make me biased, because my biggest guilty pleasure of them all is a good YA historical romance (look at that dress!). Set in 1899, The Luxe centers on Manhattan socialites Elizabeth and Diana Holland. These sisters rule New York society, until they quickly learn that their position is far from secure. When Elizabeth is poised to married one of the most eligible bachelors in the city, her carriage tragically overturns near the East River and the heiress is lost to the current. Who would want one of the most beloved socialites in Manhattan dead?

7. Confessions of a Shopaholic by Sophie Kinsella

Twenty-five year old Becky Bloomwood has a bit of a problem. While on the outside her life looks completely glamorous — she has a gorgeous London apartment, her closet is brimming with all the latest fashions, she has an entire posse of fancy socialite friends — it turns out that she's completely unable to afford any of it, but she just can't seem to stop. Bored to tears by her job writing for a financial magazine, Becky knows she needs to tackle her problems before she completely drowns in her own debt.

8. Anna and the French Kiss by Stephanie Perkins

Seventeen-year-old Anna is looking forward to starting her senior year in Atlanta, Georgia. She has a pretty great job, some wonderful friends, and just might actually be able to win over her crush. This all seems perfect until she is suddenly shipped off to boarding school in France. It all seems bleak until she meets Étienne St. Clair, who has everything she's looking for in a guy...except for the fact that he has a serious girlfriend. Boarding school YA romances are a heck of a lot of fun, and this one happens to be particularly sweet.

9. Dead Until Dark by Charlaine Harris

If your favorite TV show was True Blood, why not go to the source with Charlaine Harris' Sookie Stackhouse novels? Set in a world where vampires have just "come out of the coffin," waitress Sookie is completely used to things being strange and unusual given the fact that she can read minds. When a vampire walks into her restaurant and she realizes that his thoughts are completely hidden from her, Sookie may just fall in love. Unfortunately Bill the vampire has a bit of a murderous reputation, and when one of Sookie's coworkers is murdered she's afraid that she might be next.

If your pleasure reading mostly consists of quirky British teenage protagonists and the seemingly endless angst they provide you've probably already read Angus, Thongs, and Full Frontal Snogging, however if you haven't, this book is absolutely for you. Written as a diary of one year in the life of teenager Georgia Nicolson, we follow her as she stumbles her way through life and love. This is more than just a heartfelt coming-of-age tale, Georgia is not only hilarious, she's "fabbity-fab-fab!" There is also a glossary in the back of the book for those who may not know British slang, not only is it entertaining, it's educational!

11. The Selection by Kiera Cass

Featuring another fabulous dress on the cover, The Selection takes place in dystopia where people are divided into a numbered caste system and a royal family rules over all. It's time for Prince Maxon to chose a bride, thus initiating the Selection, a widely publicized reality show where 35 lucky women all compete for the prince's hand. Cue America Singer, one of the lucky contestants who had to turn her back on a secret love in order to compete. Will she stay with her true love? Will she find that love with Prince Maxon? Either way, don't pretend like you wouldn't obsessively watch this show if it were real.

12. When Beauty Tamed the Beast by Eloisa James

Eloisa James' regency romances are without equal, and her fairy tale re-tellings are the best of all. Linnet Berry Thrynne is a true beauty, but when a scandal threatens her reputation, she must get betrothed to a beast. Piers Yelverton is the Earl of Marchant, spending most of his days working as a doctor in his Welsh castle. Rumor has it that he has a mysterious wound that keeps him immune to the charms of any woman, but Linnet has other plans. Cue hundreds of pages of clever witticisms and steamy sexual tension.

Were your favorite seasons of Downton Abbey the ones set in the early '20s? What if you love the idea of Gossip Girl, but would rather it be set in the Roaring 20s? If so, Vixen is for you. Seventeen-year-old Gloria Carmody dreams of living the flapper lifestyle, but when she's engaged to Sebastian Grey, the heir to one of the most powerful families in Chicago, it seems like that dream is dead before it can even begin. To make sure the wedding goes off without a hitch, Gloria's cousin Clara arrives from the country, only it turns out that Clara might be hiding some dark secrets of her own. Couple that with an envious social climbing best friend, and you have a fabulously pleasure tale of flappers, speakeasies, and scandal.