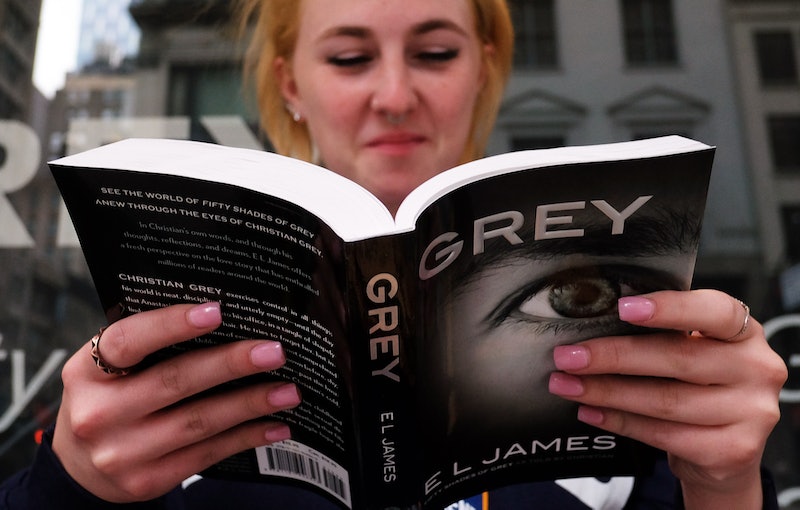 I'm always a little skeptical when someone claims they have a new technology that's going to "save the novel," or some such claim, but that doesn't mean those new ideas don't tend to be pretty cool. For instance, the new app Crave that promises to bring your romantic fantasies to life. And I think romance readers are going to appreciate this one.

Crave, created by the digital media startup Paragraph, delivers books in bite-sized chunks enhanced with exclusive extras from the app. Periodically, there will be breaks in the text of the book itself to show readers videos or gifs or other extras to complement the text. The app will even send texts "from" the romantic lead to the reader. It makes reading a book an immersive experience. The trade-off is that you have to forgo the pleasure of a binge read — the app only gives you around 1,000 words per day.

Basically, it's all formulated to make the romance novels released through Crave a similar experience to all the other apps and social media sites that we all love so much.

Of course, it remains to be seen how this will play with romance readers. On the one hand, one of the best things about a romance novel is the chance to immerse yourself in a fantasy and get lost in it for a little while. So getting pictures and text messages to go along with that experience should appeal to fans of the genre.

On the other hand, romance readers are some of the most voracious readers out there — in fact, they devour so many books a month that monthly book subscription services like Scribd have had to stop stocking romance novels, lest they be driven out of business. But Crave only releases one section of a story per day, with about 1,000 words per chunk, which means it would take you well over a month to get through a single title. And that might not play well with their target demographic.

It's something the app makers don't seem overly worried about, though. Regarding why they're making people "read slower," they write on their frequently asked questions page,

We wanted to help long-form storytelling compete with the onslaught of new content available now. We decided to create an experience that fits into the way people consume information today — in short bursts of attention — and with audio, video and vivid imagery.

And as Paragraph CEO Ziv Navoth told The Huffington Post, they think that in the busy modern world, most people just don't have a few hours that they can devote to something on any given day, so why not break things up?

“We realized that something’s going on in the way stories are being told,” Navoth Told Huffington Post Books. “If we want these artifacts to be relevant, not as something that’s printed on dead trees, but as something that’s a long story — we believe in the future of long stories — then we have to bring them to this world.”

All of which is potentially very cool. Though I'm not entirely sure why Navoth and Crave seem to think that long stories — aka novels — need any help staying relevant. More than 70 percent of Americans say they have read a book during the past year, and young people are among some of the most voracious readers out there, meaning books presumably still have a future in our society once the whippersnappers take over. In fact, not even print books are in danger of dying out, for all that people like to throw that theory around. And even independent bookstores are doing pretty well. So I've never fully understood why people seem to feel the "If it ain't broke, don't fix it" thing doesn't apply to reading — but then maybe I'm just old fashioned. I like my books hard copy and with a nice glass of tea.

To be sure, the idea of augmenting books with digital extras is a very exciting idea and holds a lot of potential. And who knows? Maybe it really will forever change the way we read romance. Check out the video below or go to their website to make up your mind for yourself.