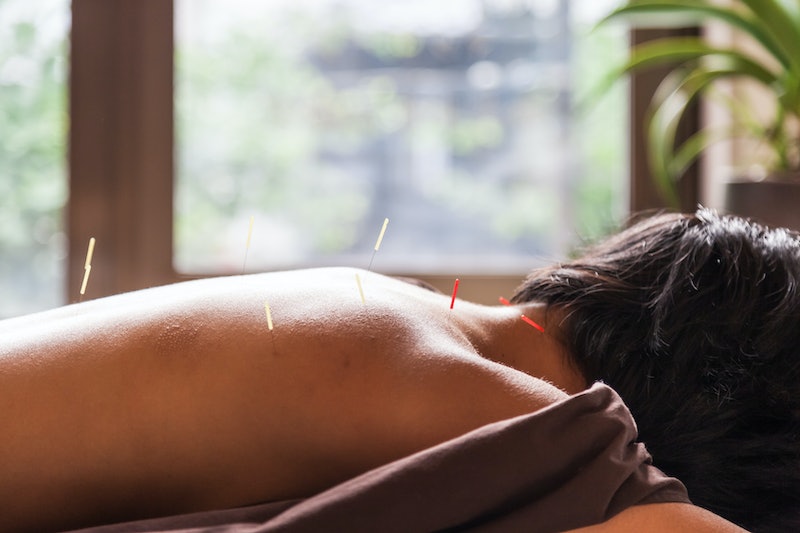 After I was diagnosed with scoliosis in 2014, everyone and their mother suggested that I get acupuncture done. Mind you, none of these people had ever done it before themselves, but they still swore that it would relieve my chronic pain and ease my anxiety in general. I accepted their recommendations with a stiff smile, only to roll my eyes privately.

Until very recently, I didn't have much experience with holistic health treatments. The chiropractor was as far as I would get from mainstream modern medicine, and that was good enough for me, thanks very much. Also, I'm deathly scared of needles. But when I kept waking up with a nasty backache every morning, I knew it was time to try something different.

I got in touch with an acupuncturist who came highly recommended and I booked a treatment. Her name was Seven. (No, really, that's her given name; she's part Native American.) I went into my first session with Seven feeling positive, but also sweating profusely because I was so nervous. What happened over the next three months was pretty wild, and a lot more good things happened than I expected.

Here are 11 things that changed after committing myself to acupuncture for three consecutive months.

Obviously, I wouldn't have kept going back for that long if this wasn't one of the first changes I noticed. The morning after my very first treatment, I woke up with absolutely no pain for probably the first time ever in my life. I nearly cried into my coffee. While not all mornings were this heavenly moving forward, the vast majority of them were, and that was enough to keep me going back for a long time.

During the second month, I started seeing her twice a week. By then, I was feeling incredible. I could sit at my desk for an hour or two without experiencing extreme discomfort in my lumbar spine, and there was no more nerve pain in my neck.

One of the first things my acupuncturist, Seven, always asks me at the start every session is when my last period was. It's one of the things I've grown to love about acupuncture — acknowledging that all parts of the body, including the reproductive system, work with each other and inform the state our bodies are in.

On our third appointment, I told her right off the bat that my period was eight days late but that I knew I wasn't pregnant. She told me that she could "needle it out of me." My initial reaction to something that ominous-sounding was No way, girl. But my desperation to menstruate prevailed, so I agreed to having a few extra needles stuck in.

That day, she put two needles in my feet for the first time. One of them hurt like hell upon entry. Then, she placed a couple extra in my lower back, right around the kidneys. The next morning I woke up astounded — my period had appeared in full force.

Right around the time of my period over the next two months, knowing that I struggle with irregularity, Seven did the same thing. Both months my period came right on time, on the exact day my Kindara app predicted.

Acupuncture has been connected to relieving insomnia in many people, and there are studies proving that this ancient Chinese treatment is significantly more effective than prescribed medication.

After a few weeks of acupuncture, my internal clock slowly got adjusted to where I could fall asleep around 10 p.m. and sleep for a solid seven hours without stirring, something that rarely happens. Also, on the mornings I had to set my alarm clock a bit earlier than usual, I wasn't dragging myself out of bed cranky and miserable. Vitality was the name of the game.

This isn't as sad as it sounds. It's not like I stopped enjoying coffee; I just didn't need to throw back three or four cups a day to keep my energy up. At the end of my first month of acupuncture, I was perfectly happy with just one coffee in the morning. This also meant that I wasn't dealing with a massive caffeine crash at the end of the day.

Apparently, I'm not alone. Once you get needled on the regular, you usually have more energy to get things done without relying on substances. Even after just one treatment, some people report having a pep in their step for days or even weeks afterward.

Blame it on the new alignment, I guess, but it was suddenly uncomfortable to sit with one leg sexily crossed over the other. I wasn't instructed to make this change by my acupuncturist. I spontaneously discovered that positioning myself like this while working at a desk was seriously uncomfortable, and it was resulting in a dull ache in my lower back.

I swear, I gained about a quarter of an inch on my neck. Because of my tight shoulders and the collapse in my cervical spine, my shoulders naturally creep up toward my ears all the time. This is neither physically comfortable nor aesthetically pleasing. Regular acupuncture fixed this up pretty quickly, though.

Within a month, my shoulders were more relaxed than ever before, allowing my neck to be beautifully exposed. The best part? Two friends pointed it to me, and dragged me to the mirror to see for myself when I refused to believe them.

7. My Anxiety Was Significantly Reduced

My most anxious time of the day arrives between 4-6 p.m., and it usually makes me crawl behind my couch for a self-induced timeout. However, the longer I stuck with acupuncture, the less and less that mean anxiety monster came to harass me. It didn't hurt that I left each session super duper Zen. Luckily, that feeling stayed with me for many hours afterward.

A 2013 study published in the Journal of Acupuncture and Meridian Studies showed that just a 20-minute acupuncture session eased anxiety and increased memory strength in participants compared to subjects who received no treatment at all. The needles are meant to get your Qi flowing, which slows down the production of stress hormones.

8. I Drank More Water Throughout The Day

It all started because I left my first session dying for a bottle of water. I ended up drinking an extra liter of H2O that day, which, trust me, never happens. This habit continued for the entire three months as I turned into an acupuncture junkie.

Seven told me it's pretty standard for people to become more conscious of what they're putting in their bodies when they engage in holistic treatments. They tend to make better choices in their diet and pay attention to what their bodies are truly in need of.

9. I Was More Flexible In Yoga

I felt like I had a new body in my hot yoga classes. My thoracic spine was feeling especially open and bendy, and I could explore postures in ways I never thought possible. Because those small needles can get in between tight muscles in ways that a massage therapist's hands never could, I was experiencing flexibility in the most unexpected of places. Subsequently, I was stretching deeper into the poses, and this granted me even more relief than the acupuncture treatments alone.

Tickle tension is real, people! You might think you're just, well, ticklish, but oftentimes these spots in our body indicate that something else is going on underneath the surface. Maybe it's due to an injury from years ago, or perhaps the muscles in that area are just extra tight.

There was a spot smack dab in the middle of my back, to the left of my spine, that used to make me giggle so hard that massage therapists couldn't even put pressure on it. Seven spent a lot of time in the neighborhood, though, and by the third month, she could dig into any part of my back without my laughing like an idiot.

We've all heard about the new level of awareness that comes with things like yoga, meditation, and holistic treatments such as acupuncture. Fortunately, I'm here to report that they're not legends. I truly did achieve a new level of consciousness in my own body after being needled so often in that three-month period. Acupuncture helped me identify the different sensations that popped up in the small corners of the body, and figure out if they needed my time and attention.

So now, I guess I've become one of those people who highly recommends you try acupuncture, too.