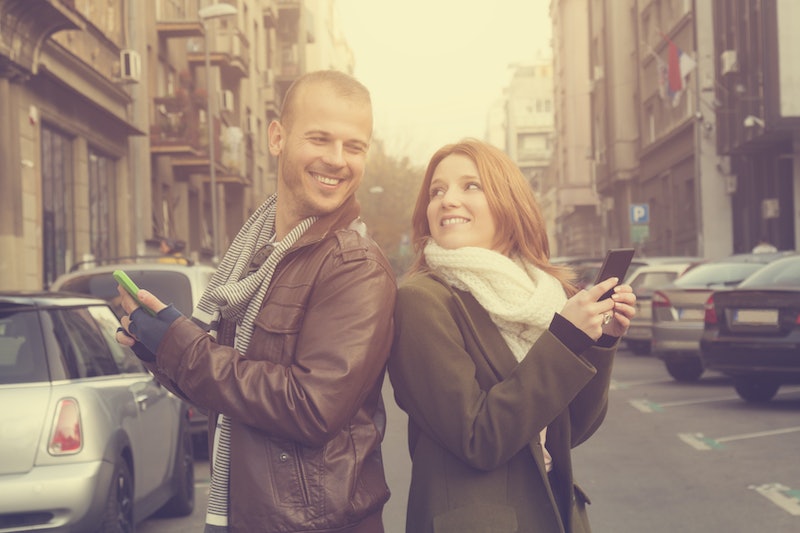 There's a lot of debate around how effective dating apps are. You've heard they're the death of romance, they are all about hookups, they make people less likely to settle down, etc.. And in some ways, it's fair— the way apps work make us treat people like they're more disposable and changes the way we communicate, not for the better. While a 2015 Mic study found that only 9.4 percent people met their significant other on dating apps or sites, it is how everyone I know meets someone to date. So you shouldn't freak out and think there's no way you're going to actually meet somebody online. You totally, totally can. It's just about how to figure out how to do it effectively.

Because that's the actual problem with dating apps. They seem simple and slick, letting you just quickly swipe and make an instantaneous connection. But the truth is, they're incredibly time-consuming and it's not always easy to take the conversations offline. You can spend hours a week swiping and having mindless chat without every meeting someone in real life. They can be a total time-suck, as many of us remember from when Tinder first came out and dinners and drinks were invaded by incessant swiping and dull eyes glowing in the light of phone screen.

But part of it is finding the best dating app for you, whether you're looking for casual sex, short-term dating or a LTR. So here are the dating apps real people find most effective:

I'm not on any right now cuz I'm leaving the country for a few months, but Bumble was my favorite and is the top choice amongst my girlfriends. The girls message first platform weeds out a lot of creepers!

I don't know if Tinder is the most effective, but I feel like it's your best shot because of the sheer number of people on there.

I was always obsessed—like REALLY REALY obsessed with Tinder. And I still have it and use it but I started trying other ones and Bumble seems to be the one I'm going on way more proper date dates from. So it depends what you're going for, but relationships I said Bumble.

OkCupid because from my experience, most guys on there are actually looking to date, and the fact that it includes profiles and compatibility percentages it makes it a lot easier to gauge whether you'd get along with someone.

I love Bumble because it makes me get off my ass, so to speak. I can't be passive and wait for dudes to message me because I literally have to be the first one. It's also upping my texting game because you've got to be clever to get someone decent to want to hang out. I just wish it had a pause button for when I'm unable to actually send messages within that 24 hour window. We have lives, Bumble!

NONE OF THEM. Just kidding. I think it depends on what you're looking for. I tend to prefer Tinder, but I'm also not really looking for a serious relationship of any sort. I usually end up getting the most dates on Tinder over any of my other apps. That being said, I probably talk more to people on OkCupid, but the chances of me meeting up with any of them in real life are slim.

Tinder! I've honestly never found it to be "the hookup app", but that's also not what I was using it for. If you're looking to talk to someone and actually go on a date, I think Tinder's your best bet. You just need to spend some time and be selective. I don't think it's the best user experience, and I definitely like using The League, but my best dating app dates have been Tinder ones.

I'm a big fan of OKC, because I met my very rad boyfriend on there. I also only went on one truly terrible OKC date, versus the majority of my Tinder dates that were terrible. I like that OKC gives you the option (but not requirement) to write a bunch, because then you know it's a red flag if someone writes more than a sentence for each question. What are you trying to prove with your paragraphs of text?!

I don't use a lot of dating apps (and don't <3 them), but if I had to pick, I would say Hinge. Hinge at least somewhat provides a basis of connection (through Facebook friends) and limits the amount of swiping, each promoting a sense of consideration for the other person vs. an app with endless options and the ability to catfish. I actually met my last BF on Hinge (but it didn't last long, or end well, so take what you will from that...)

Anything where there's an actual bio. Not just a blurb. OkCupid and Match are my favorites, because I only want to talk to someone when I learn more about them than a few photos.

I had a great experience on a new-ish dating app, The Dating Lounge. I like how easy it was to see who I had in common with my date. I liked that I was able to see his first and last name so I knew who he was for sure. Then I like that I was able to reach out to the woman behind the app who is a real Professional Matchmaker and ask her what she thought of him as a match for me. And she actually replied and gave me some really good advice.

13. Antonia, Author Of The Ultimate Guide to a Multi-Orgasmic Life

I'm also single in a digitalized society, which means I've tried many dating apps. I have found that Tinder is more effective than any of the others. I had hoped that paying for Match would garner better results, but instead it's only offered the same cheesy pick up lines and same guys I'd already heard from on other dating apps. Tinder has offered more than just guys looking for hook ups, and I've even made some longer term friends there.

Tinder has been the best source for dates for me.

I enjoy Bumble so much. Being a twenty-something fashion girl in NYC can be so busy and fast-paced with work that I can barely find time to eat and sleep, let alone meet guys. Bumble offers the perfect platform for me to meet potential dates. I feel like a lot of the guys I match with on Bumble are in my same situation. They're busy with work and life in general. It's also a really hard place to meet people because there are SO many people. Bumble seems to attract the type of guy I'm attracted to in general, relatively preppy, good looking, successful. The guys aren't just looking for a hook up or a one night stand like on other dating apps. I find myself going to meet out for drinks, dinner or enjoying some sort of event with my matches. The lady has to reach out first, so my real struggle is seeking out a creative and eyecatching opening line to standout. Obviously, not every date goes amazing, but I've met a bunch of great guys and had a lot of fun with the app.

I think Hinge is generally the most effective dating app. There's a limited number of potential matches a day, so you're not mindlessly swiping through countless photos. And because there's some degree of a connection, you feel like this is a real person, which leads to less flakes. I also like how there's a bit of a profile with some info, but not a super long profile of paragraphs. Plus, they just got rid of that god-awful 24-hour shot clock, which is a big upgrade.

I like having control of who I talk to and message. No games needed you can just message the guy and you'll know if he likes you based on 1) if he answers and 2) if he asks you out.

I'm so paranoid about clicking the wrong button with my clumsy fingers that I don't actually use the mobile versions of any dating apps. I stick to desktop, for the most part, because I'm just that lame. But if I had to pick, I suppose OkCupid. Plenty of Fish has never come through for me, but I've had a few dates off OKC. Not good dates, but dates. So, good for OKC?