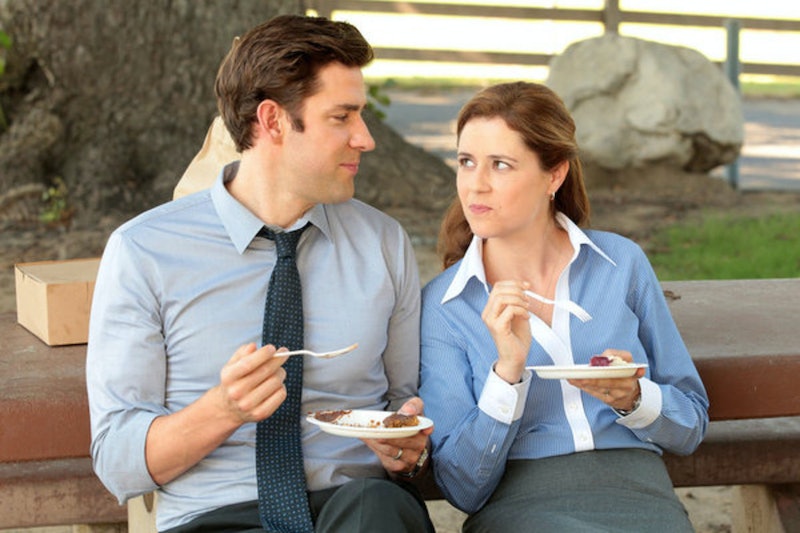 It's OK to admit that The Office's Jim Halpert and Pam Beesly give unrealistic relationship goals that, even years after the show's finale, you still can't capture. In fact, there's a reason behind it: It was all genuine. In a recent interview, Pam herself, Jenna Fisher, copped to the secret between Jim and Pam's undeniable chemistry on the series: “There’s a real part of me that is Pam and a real part of him [co-star John Krasinski] that is Jim, and those parts of us were genuinely in love with one another,” Fisher told Andy Cohen on Watch What Happens: Live. So, is there a way for you and your S.O. to unlock your inner Jim and Pam?

Listen, I've watched The Office through about five or six times, so I've scrutinized their romance back and forth. And while there's a rockiness evidence in later seasons (seasons that we kind of breeze through with nominal attention) it's clear that you can get a lot of relationship tips from Jim and Pam. So because I care about you, and because I care about how pop culture brutally warps our romantic expectations, I plucked some (quasi-realistic) relationship tips from The Office's golden couple.

You follow these, and pretty sure you and your cubicle mate will be up in Niagara Falls in wedded, knocked-up bliss!

Well, long before they became a true couple, Jim and Pam would brainstorm pranks to pull on Dwight to pass the time. That is an A+ way to bond with someone, and it's something that kept them together (and decidedly amused) throughout the course of the show — even when Jim was taking a short detour through Karen town.

2. Pay Attention To The Little Things, And Then Put Those Things In A Teapot

Jim is a master at gift giving, first evident when he gets Pam for Secret Santa. He preps her this teapot she's being dying for, plus an assortment of special inside joke gifts (that hilarious high school photo? How sweet). An eye for detail is the perfect way to show someone how deeply you care, even if you take out the card that explicitly says that.

3. Have A Signature Gesture

You could argue that Jim's confession in "Casino Night" was ill-timed and most certainly delayed. Yes, he could've picked a better time than right before Pam's wedding, but he could've picked a worse time like right after Pam's wedding. Or you know, not at all. In any case, even though it's another season or so before they get together, Jim's confession is enough to give Pam pause and call off her engagement to Roy. So you know, don't put off things too long.

5. Support Each Other's Dreams, Even If It Complicates The Logistics Of Relationship

This is within reason, because everyone has a breaking point. Once one person's dream eclipses the other person entirely, it gets murky, and this was largely what drove Jim and Pam apart. But in happier times, it was very sweet that Jim encouraged Pam to study graphic design at Pratt Institute. The two did their best to make long distance work, and he was even willing to wait another three months so she could come back "the right way." In the end, though, Pam wasn't big on graphic design, and PB&J was reunited.

6. Trust Each Other And Try To Separate Yourselves From The Past

Also during that timeframe, Roy prompted Jim to consider that, well, perhaps Pam was finding someone to rely on in New York. After all, Pam had male friends, and Jim was once a male friend. And although Jim was originally psyched out enough to drive up to New York, he turned around, stating, "I'm not that guy. And we are not that couple." Repeat it with me, guys: "We are not that couple."

7. Realize That You're Entitled To Your Privacy... Unless You Two Have Signed Up For A Decade Long Mockumentary, In Which Case, Best Of Luck To You

It is very cute that Jim and Pam try to keep their relationship on the DL, and I don't think you need to blast your romance in a "Facebook official" way if you want to do the same. At the same time, well, if you're going to be to be discreet with your romance, be aware of any roaming camera crews. You tried, guys!

8. When Bae Is Feeling Helpless, Find A Way To Get On Their Level

I don't mean drag yourself into a mutual crippling depression or anything. I'm just saying, Pam ripped her veil, Jim cut his tie. And if your love is hurting, you want to find an adorable way like that to pick them up and remind them you're in this together.

9. Don't Feel Bad About Escaping From Your Family And Friends, If Necessary

If Jim and Pam had originally eloped like they were planning to in "Cafe Disco" I would've been piiiiiissed. But I do think that amongst all the craziness during their wedding, the Niagara Falls elopement was really something special, something that guaranteed their co-workers wouldn't eff things up with a YouTube video re-enactment. Being in a relationship doesn't mean you need to shut out all of your loved ones out of your lives, but there's nothing wrong with catching a snapshot moment that's all your own.

10. Commit To The Couple's Halloween Costume, Even If You Think It's Totally Lame

THIS IS SO IMPORTANT, OMG. I mean, you guys all know that Jim is anti-Halloween costumes, right? But he sucks it up once Pam's former date calls her a bit "dorky." Um, that's Jim's dork, thank you very much. Anyway, yeah, suck it up and put on the Batman mask.

11. And Never Forget Why You Fell In Love With Each Other

Thanks to the joys of an often-documented digital world, you probably have many reminders of relationships laying around on your laptop. But guess what, none of them will compare to Jim's compilation of PB&J moments, a video that could bring even the coldest cynic to tears.

When the going gets tough, take a cue from Jim and Pam and remind yourself... and your love... that they are everything to you.