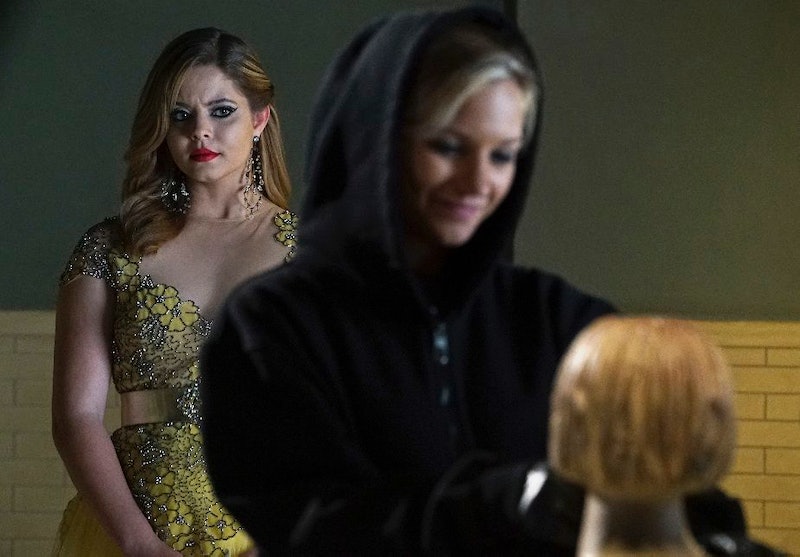 Time may pass, but as the new season of Pretty Little Liars has shown us, nothing ever really changes in Rosewood. Season 6B of PLL opened with a five-year time jump, and with A — aka Charlotte DiLaurentis — being released from the mental hospital following a hearing. Of course, not everything was sunshine and roses in Rosewood — in true Pretty Little Liars fashion, Charlotte was found dead just one day after she was welcomed home. While the Liars are worried about being the top suspects for Charlotte's murder, Ali is devastated to lose her sister so shortly after bringing her home — and seems hellbent on finding the person responsible for Charlotte's untimely death. But could Ali's behavior in Season 6B be a total act? A new Tumblr post theorizes that Ali killed Charlotte — and as disturbing as it is, it makes a whole lot of sense.

Tumblr user The Best PLL Theories (which has a very appropriate name, in my opinion) thinks that the show might be pulling a major twist on viewers by setting Ali up as the grieving sister. A theory posted by the account points to Ali's manipulative tendencies as evidence that Ali could be playing the Liars in order to get what she wanted — Charlotte dead.

It's true that Ali spent lots of time with Charlotte prior to her death, and that she worked hard to make sure that Charlotte could leave the mental hospital and come home to live with her. But while Ali certainly seems to have turned over a new leaf, we can't forget that Ali wasn't always a kind, forgiving person. When we met Ali, she was manipulative, vengeful, and cruel, and was casually cruel to even her closest friends. She blackmailed Aria's father, encouraged an insecure Hanna to purge her food, and threatened to expose Emily's sexuality. It's no wonder that Mona was convinced that Ali was a sociopath.

It certainly seems like Ali has changed, but what if Mona was right all along and that Ali was feigning real emotions in order to get what she wanted? That's the idea behind this theory, which suggests that Ali was only pretending to care for Charlotte after her hospitalization. Instead, Ali was furious at Charlotte for forcing her to live on the run and for torturing her when she returned to Rosewood — Ali didn't like being played by anyone. Ali wanted to get Charlotte out of the hospital so she could kill her — not so her family could live happily ever after. For more on Ali and everything else PLL, check out Bustle's podcast Taking This One To The Grave.

If Ali's "new leaf" routine truly was an act, then it's a pretty brilliant one. "Mean girl Ali" was a master at manipulating the Liars, and it might be exactly what she was doing here. We know that Ali summoned the girls to Rosewood, but The Best PLL Theories suggests that it's for a far more sinister reason:

[Ali] begging the liars to say “I’m not afraid of Charlotte, release her” was all part of her plan to set them up. With all of them saying "release her" and one of them saying “I won’t feel safe with Charlotte released,” it looks like they wanted her released so one of them could kill her - the liars not realizing this is how it sounds at the time of giving their speech. [When Ali told Dr. Rollins] “You don’t know them like I do,” [it really meant that] Alison knew Aria would say the truth which further makes them look guilty of wanting Charlotte released... as a hate for Charlotte still remains.

Though plenty of Ali fans may disagree, I absolutely love this theory. A redeemed Ali is interesting, but an Ali who is selfish, ruthless, and complicated is fascinating. Ali turning out to be playing the girls is certainly a dark twist, but it's a juicy one that seems appropriate for the original Ali we got to know. Whether The Best PLL Theories is right or not, I'd be all in for this.