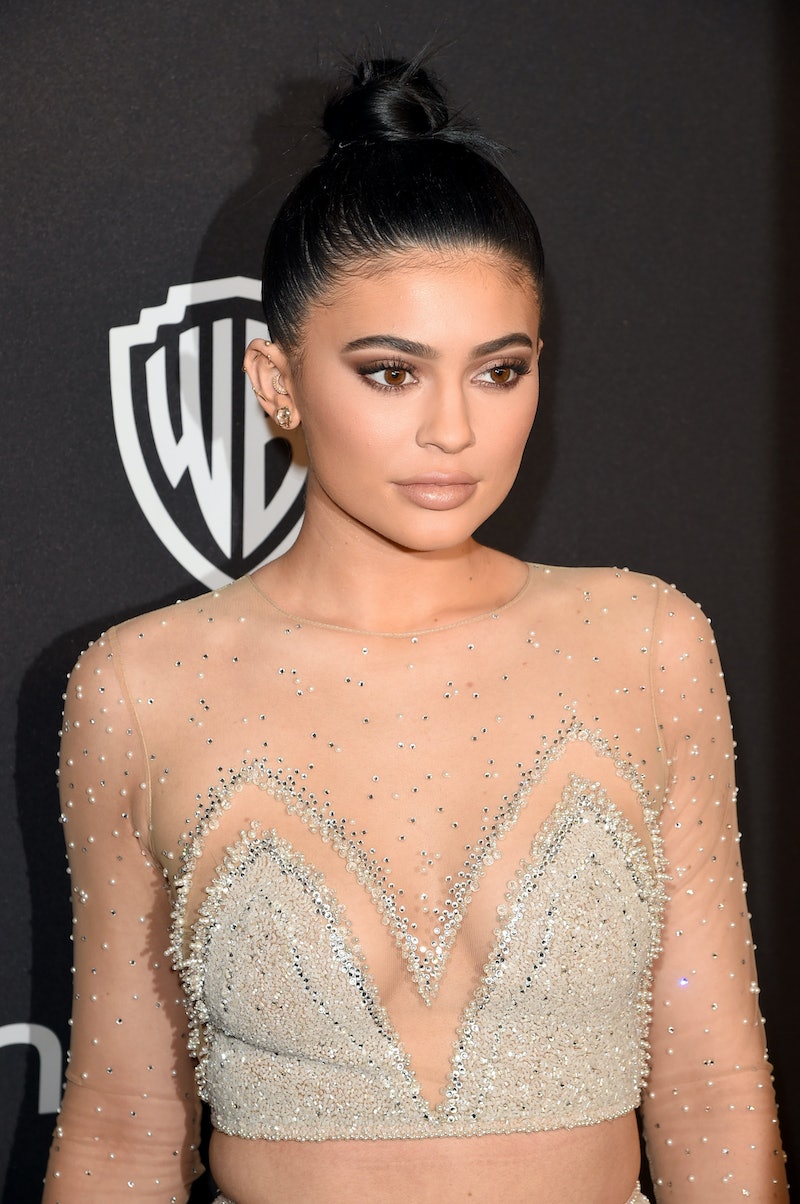 Kylie Jenner's Lip Kits sold out in minutes and since, have been causing chaos on the Internet. Basically, a real case could be made that the product was the biggest of 2015. Clearly, Kylie's family thought so, too. These 15 photos of the Kardashians and Jenners wearing Kylie's Lip Kit prove that this family doesn't only look out for themselves, but that they're definitely supportive of each other. Plus, the lip kits seem sort of awesome on their own, so I'd like to think they'd rock them regardless of whether or not they were Kylie's.

The kits themselves debuted to tons of applause. There was gobs of anticipation building up to their launch late last year. In fact, people were so ready to duplicate that signature Kylie lip that the kits sold out basically instantaneously. Only a few days later, prices for the kits on Ebay were in the four digits. Thankfully though, Kylie, in all her makeup wisdom, decided to give her fans what they wanted. Rumor has it — and by rumor, I mean Kylie and friends' Instagram accounts — that Valentine's Day will be the day for the not only a relaunch of the lip kit but for the new rosy pink color, Posie K.

Basically, the lip kits aren't going anywhere, but that hasn't stopped the Kardashians and Jenners from supporting Kylie and her project. Here are 15 photos of the family rocking Kylie's lip kit, proving it's perhaps the lip product of the year.

Jenner definitely added a gloss to get her signature wet lip look, but that's undeniably the Kylie nude.

Kourtney Realizing She Was Late To The Parade

It took Kourtney a little longer to jump on the band wagon, but she sure seems glad she did.

A little parental bonding over makeup.

Khloe truly knows how to rock these shades.

Khloe Solidifying Her Place As Queen of Candy K

This shade was practically made for Khloe.

Kylie Giving Us All A Sneak Peak

It seems like no one else has Posie K yet, so Kylie wearing it is totally supporting her brand.

It's such a good shade of pink, y'all.

Khloe Giving Us One Last Pout

The brown hue totally complements that green hair, doesn't it?

This is a signature Kylie Jenner lipstick color.

Kylie Rocking Out In Candy K

Are you excited about her new lip kit yet?

More like this
12 Party Makeup Looks That Are Perfect For The Holidays
By Jessica Willingham and Olivia Rose Ferreiro
How To Get “Glazed Donut Nails” At Home
By Audrey Noble
Emily Ratajkowski Believes You Should, In Fact, Get Bangs
By Rachel Lapidos
The 8 Best Beauty Looks At The 2022 People’s Choice Awards
By Audrey Noble
Get Even More From Bustle — Sign Up For The Newsletter