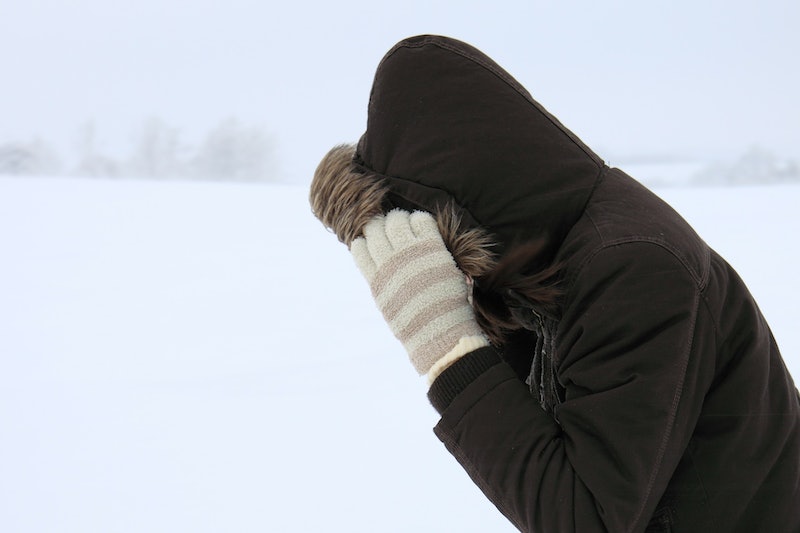 Here on the East Coast, we just got hit with the first winter storm of the season, and I have to tell you, I'm a little excited. Growing up in Texas, we never got these "blizzard" things. Everyone around me's groaning about the inconvenience, but to me, the idea of a blizzard sounds great — the perfect excuse to make some hot chocolate and curl up next to the radiator with a good read. So, along with my pre-blizzard grocery run, I stopped by the library for the real essentials: books, books, and more books.

Whether you're plagued by rain, snow, sleet, or hail, the bad weather is practically begging you to grab a blanket, a warm drink, and a gripping tale. The patter of rain on the windows. The whooshing of wind outside. The warm, cozy hug of your favorite armchair. It's the ideal moment to make some time for your imagination.

Some of these books are filled with storms and rain to match what's going on outside your window. Some will draw you in to faraway worlds, zapping your cabin fever away. Most importantly, all of these will entertain and delight you for hours on end. So let the weather rage on, you've got some reading to do.

This book is enormous and wonderful — you're certain to get pulled in. The collected works of one of Finland's most legendary authors, these stories are like pure shots of imagination. Anything can happen in these stories. Fans of Ursula K. Le Guin, Milan Kundera, and Virginia Woolf will be particularly drawn to Krohn's rich writing.

2. One Hundred Years of Solitude by Gabriel Garcí­a Márquez

This immersive classic features the town Macondo, where it rains for four years straight. But there's much more to this top-notch read. Following the Buendia family over several generations, One Hundred Years is a magical realism marvel, filled with fantastical events and told in beautiful prose. The perfect book to curl up with for hours at a time.

The second book in the Circle of Magic series, this adventure-filled read stars Trisana Chandler, a mage in training who has weather magic, allowing her to manipulate wind, rain, and even lightning. In this installment, Tris and her three companions uncover a mysterious plot and battle pirates, using their strange magic in any way they can to protect their home. This book will wrap you up and quicken your heartbeat as you imagine how cool it would be to have weather magic right now.

4. Under the Udala Trees by Chinelo Okparanta

If you want to get wrapped up in a story, this book will do just the trick. Based on Nigeria's folktales and its war, Under the Udala Trees follows Ijeoma, a young girl whose country falls into civil war when she's 11 years old. When she's sent away for her safety, she and another displaced girl become star-crossed lovers, in a world in which same-sex love is not tolerated. Emotional and illuminating, this is a book as important as it is captivating.

5. The Princess Bride by William Goldman

This book will warm up any dark and stormy night. Filled with heaping loads of comedy and adventures, this book will throw you into a fantastic world of fencing, fighting, chases, escapes, and true love. If you're a fan of the movie, you'll be especially delighted to dive deeper into this colorful world.

6. My Brilliant Friend by Elena Ferrante

You're sure to fall in love with this rich and masterfully-told series following a girl named Elena as she grows up in tumultuous Naples. From early on, Elena is mesmerized by her friend, Lila; both her brilliance and the dangerous circumstances of her life. As the two navigate growing up, they are exposed to a raw world, filled with competing forces of love and power.

7. The Way of Kings by Brandon Sanderson

Storms play an important role in this un-put-down-able fantasy epic. Kings, slaves, magic, and war rule this vibrant world. Amid it all are rumors that an ancient order is rising again. Sanderson's characters all have a drive that will pull you along like nothing else. Even at 1,007 pages, most people blow through this in a manner of days — that's how much it hooks you in.

You may be stuck inside, but with this book you'll be traveling the breadths of time and space. You'll read the first half of each character's story — ranging from the 1850s to the distant future — and then boomerang back through the second halves in reverse order. Throughout it all, you'll trace the underlying currents, the keys that connect humanity throughout the ages.