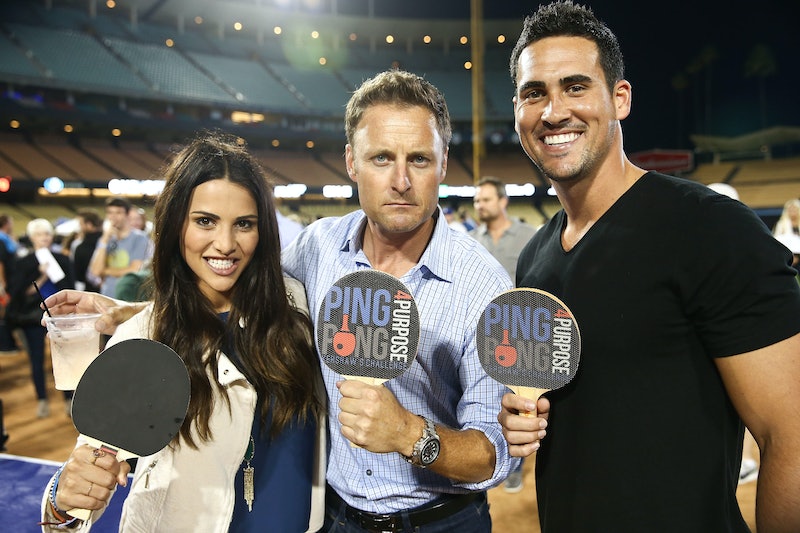 All you members of Bachelor Nation, I need you to tear your attention away from Ben Higgins' current season of The Bachelor and answer a question for me: are Andi Dorfman and Chris Harrison dating? Normally I don't get sucked into this kind of gossip, because I feel like every other day, someone's trying to pair the host up with one of the contestants, or even make him the star of his own season, but this time I'm not writing it off so easily. That's because this time, there's actual real photographic proof that Dorfman and Harrison are spending time together, and it comes in the form of a photo that she posted herself, to her own Instagram, of the two of them together in New York City.

And guys, again, I am a very calm and rational person, but there are a lot of indicators that this isn't just a friend hang. First of all, there's the caption: "Distance makes the heart grow fonder and the wine flow stronger when it comes to @chrisbharrison," with a wine emoji and heart emoji (!!!), none of which strikes me as the way you talk about a platonic relationship. That word "distance" is so loaded, for one thing, and the former Bachelorette totally knew what she was doing with those emojis. Don't play emoji-coy with me, girl. If they were just pals, I would've at least expected to see a smiley face or a thumbs up in there. (That being said, we reached out to Dorfman's rep and have not heard back at the time of publication.)

And then there's the matter of just how cozy they look together in this photo. Take a look for yourself, and we'll reconvene in a moment.

See what I mean? Their bodies are turned toward each other, their heads are touching, Harrison is holding onto Dorfman like he wants to give her his first impression rose... all the signs are there, at least from where I'm sitting. The only thing that makes me think these two aren't seeing each other is the fact that Dorfman put the photo up at all; if they were really an item, I suspect they'd keep it a secret. Unless they've already been dating for a while and this is them going public? Ugh, every time I think I have it figured out, they suck me right back in! (So basically a season of The Bachelor or The Bachelorette.) But either way, best of luck, you two! At whatever it is that you're doing.