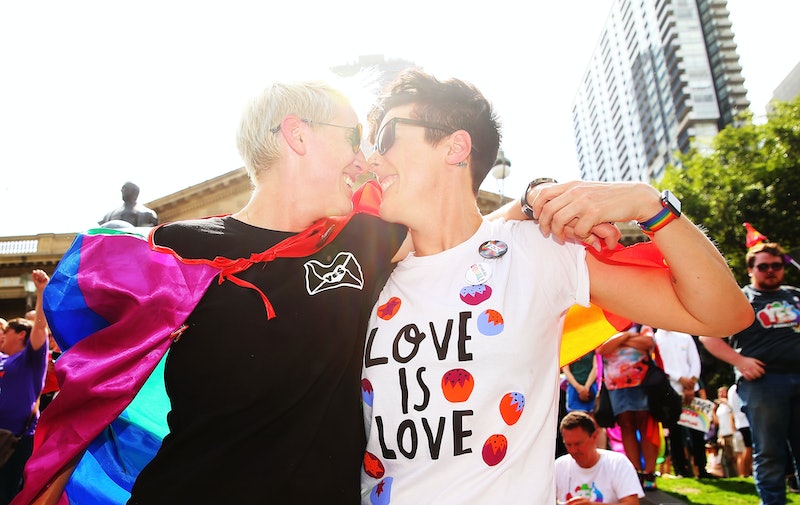 LGBTQ protections might be improving overall, but when it comes to more precise LGBTQ policies by state, some places in the nation are doing better than others. To illustrate the differences throughout the United States, researchers from Out & Equal Workplace Advocates created a fascinating infographic where they resized and color coded the 50 states in our country to represent their sexual orientation and gender identity policies. Specifically, they assessed data in reference to five categories, including the ability to self-identify on ID documents, familial status recognition, health, safety in schools, and non-discrimination policies. Because yes, in spite of the awesome advances we've made in regards to same-sex marriage equality, there are still major issues affecting the LGBTQ community.

The methodology breaks down like this: Using data from the Movement Advancement Project (MAP), Out & Equal Workplace Advocates ranked states as negative, low, medium, or high based on the factors listed above. From there, they redesigned the map of the United States. Now, initially, the map may appear exactly as it is ordinarily (nothing is rearranged, or put in a new order) — however, states' sizes are increased by an incremental scale of 25 percent depending on its overall ranking and measures in regards to LGBTQ policies. So, for example, while California grew in size, lower ranking states like Tennessee and Alabama (who are, notably, the only states in the negative) shrunk in size dramatically.

Interestingly, it appears that a whopping 65 percent of people are visual learners, according to the Social Science Research Network, so compiling this data comparison into a visual like this has the potential to make a lasting impression on many readers.

So, to start, here is the resized and color coded map:

And here is a close-up of the key and methodology:

As you can see, there are a great deal of blue states on the both coasts. Admittedly, the size increase doesn't appear to make a big difference when it comes to New England, as those states are so much smaller to begin with, but the color coding here makes a big difference. There's a smattering of blue in the middle of the country, as well as a nice amount of yellow. However, the "low" ranking territories appearing in green are, unfortunately, pretty prevalent: 25 states fit into this category, which is about half the country. Ouch.

Why is there so much variation in what protections and rights LGBTQ people have from state to state? The simple answer is that because our local and state governments have so much power (which is, many people agree, a good thing in general), they are individually able both to create laws or not enact laws which either hurt or help LGBTQ people. Ideally, through education, activism, and advocacy, we can move forward to create more inclusive laws and protections specific for LGBTQ identified people across the country. Our rights shouldn't change because we cross state boarders — period.