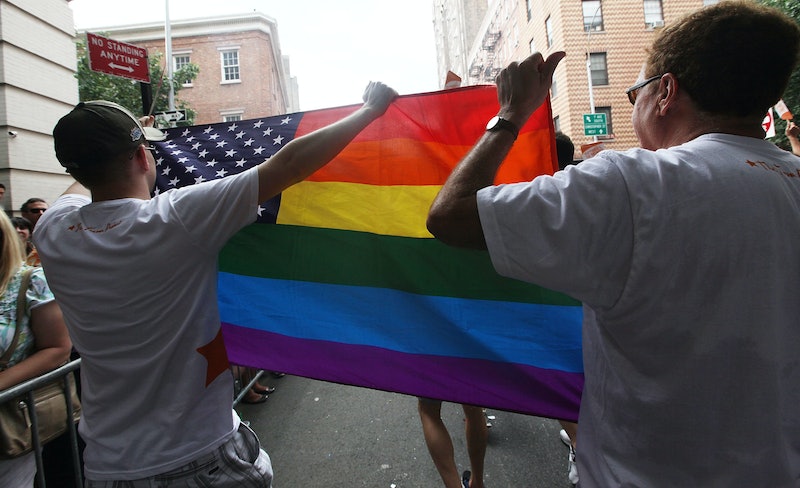 Happy Pride Month! This June (and really, any month) it's worth taking stock and asking: What's the best state in America for gay rights? Of course, ranking states for their LGBT friendliness, from Vermont to Illinois, can be a tricky thing to measure, due to the plethora of gay rights issues. Which rights are most important when you're making a list like this? Are we measuring the right to gay marriage as more crucial than anti-discrimination laws? What if laws are only explicitly about gay people, and not the whole LGBT community, including transsexuals, and bisexuals?

We thought about it, and used the following factors, as of June 2014, to determine our ranking of the 12 best states in America for LGBT rights:

Importantly, we're ranking for LGBT rights here— not just gay rights. The difference is that gay-focused laws solely protect or concern lesbian or gay couples, and don't explicitly include transgender people or bisexuals. So which state deserves to be proudest this month? Read on to find out.

Maine has both gay marriage and domestic and civil partnerships, LGBT IVF and surrogacy are legal, and LGBT children are protected by anti-bullying laws in schools. However, in Maine, adopting the children of your LGBT partner as a stepparent is still difficult. And although trans people are allowed to change their gender on their birth certificates, they must undergo sex reassignment surgery first. (This isn't a requirement in several other LGBT-friendly states.) The state's hate crimes legislation is also only explicit that violence on the basis of sexual orientation is illegal, and is silent about gender identity.

However, its long-fought battle for transgender people to be included in anti-discrimination law, the Fairness For All Marylanders bill, has had a very long journey to become law. It just won a narrow victory, and its opponents couldn't raise the signatures needed to oppose it. (It still won't be law till October 1, though, so until then we have to penalize it.) On the plus side, transgender people who want to change their birth certificate gender can do so without having to go through gender reassignment surgery first.

Illinois was the first state to repeal its sodomy laws in 1962, and has had same-sex marriage since June 2. It also has some of the only gender-neutral laws against domestic violence in the America. Unfortunately, Maryland doesn't include trans people in its discrimination laws for eviction or employment, and 'gay conversion' is still, regrettably, legal. That means it barely makes the top 10.

New York's doing pretty well — it allows gay marriage and adoption, it's got anti-hate crime legislation, and LGBT issues can be discussed in schools. Separate cities and counties also have their own, personal laws extending further protection to the LGBT community.

Two major issues push it down this list: The New York Senate has just blocked two vital bills for gay and transgender rights; a ban on gay conversion therapy, and the Gender Expression Non-Discrimination Bill. The latter would have made it illegal for trans people to be evicted, dismissed from jobs, or otherwise discriminated against on the basis of their gender expression.

Why's Iowa out of the top five if it is so famous for legalizing gay marriage? Let's start with the positives: it has gay marriage, gay adoption and visitation rights, and trans people can change their birth certificate gender without surgery.

But Iowa doesn't have civil unions, which removes an option for gay people who perceive marriage as a heterosexual institution and wish to define their relationship in another way (even if it means they miss out on legal and tax benefits). The big issue, however, is Iowa's hate crimes legislation, which don't include gender identity — a big blow for trans people in the area.

Massachusetts has been known as one of the most famously gay-friendly states ever since it became the first state to grant same-sex marriage certificates back in 2004.

But it's in 7th place for a few reasons. The state doesn't allow civil unions, and trans people can only amend their birth certificate gender only after reassignment surgery has taken place. Governor Mitt Romney also disbanded Massachusetts' pioneering 'Makes Schools Safe For Gay And Lesbian Youth' program back in 2003, removing policies such as incorporating gay information into school libraries and creating support groups for LGB kids. It's never been replaced.

Vermont allows gay marriage, but not civil or domestic partnerships. However, it does have discrimination protection, hospital visits, and adoption for the gay community. And it's been historically gay-friendly: Its anti-hate crimes legislation has included gender identity since 1999, and health insurers in Vermont must legally cover gender reassignment surgery.

So why's it in 6th place? Aside from the disallowing of civil unions, Vermont doesn't universally allow gay families to do stepparent adoption.

Connecticut's doing fabulously: Gay marriage is legal, hate crimes on the basis of both sexual and gender identity are illegal, and LGBT people are protected against discrimination. Same-sex partners of state employees also get full benefits, and trans people are able to change their birth certificates without surgery. However, there are no civil unions, and there are still no explicit law against gay conversion therapy.

Gay marriage was just made legal in Oregon, and the Supreme Court just refused a call to block it on June 5. The state also has some of the best LGBT rights in America, with full adoption rights, civil partnerships, discrimination laws, anti-bullying legislation, and other protections.

Oregon is also a great place to be trans. There is full medical insurance coverage for all procedures related to gender assignment surgery. It's main drawback is that the state doesn't have any laws on the books about gay conversion therapy.

Washington State is right up there for the best gay rights in America. Gay marriage and domestic partnerships are legal, and transgender people can change their birth certificates without surgery. The state first provided benefits to same-sex partners of state employees back in 2001, and in February 2014, the state legislature tried to pass a law that would make it illegal to try to 'change the sexual orientation' of (ie, de-gay') minors. Unfortunately, it didn't pass, so it's still legal, preventing Washington State from nabbing the top spot.

Although California's acceptance of gay marriage has had a notoriously rocky history, same sex marriage (and domestic partnerships) are now legal, and gay couples can both adopt and get IVF. Hate crimes and discrimination on the basis of gender identity were made illegal in 2004, and trans people can change their gender on their birth certificates without surgery.

We're still waiting on whether the government decides to ban gay conversion therapy — the decision will be made on June 26, but there appears to be a good chance it will pass.

OK, so technically it's not a state, but our capitol is the most gay-friendly place in the nation. People can choose either to get married or have civil or domestic partnerships, they're protected from eviction, firing, or being bullied for being gay, and hate crimes against the LGBT community are against the law. IVF and surrogacy are also legal for same-sex couples — and, crucially, trying to 'cure' anybody via gay conversion therapy is illegal.

More like this
Jujubee’s Humble Reminder
By Sam Ramsden
Megan Barton-Hanson On Bi-Visibility & The Need For LGBTQ+ Love Island
By Sam Ramsden
Why You're Seeing Green Bandanas At Abortion Rights Protests
By Lexi Inks
How To Fight For Reproductive Rights, Based On How Much Time You Have
By Courtney Young
Get Even More From Bustle — Sign Up For The Newsletter