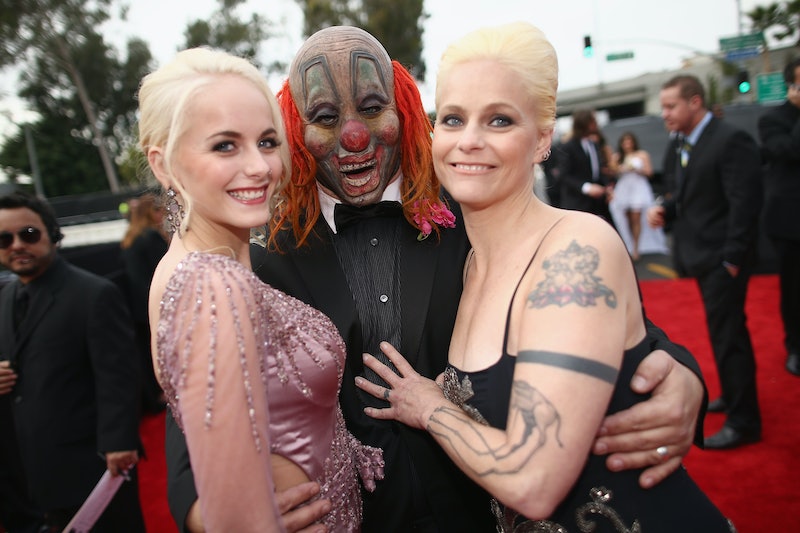 There are a few things you come to expect when you're watching an awards show red carpet: uncomfortable celebrities showing off their nails mani-cam, Giuliana Rancic being awkward, the appearance of the cast of Modern Family, whether or not they were actually nominated. One thing you don't think you're going to see? A clown — like an actual, makeup-clad, dyed red-haired, suit-wearing clown. Yet on the red carpet of the 2014 Grammy Awards, one such clown made an appearance, surprising, confusing, and completely terrifying all who caught a glimpse.

Weirdly enough, the clown likely won't be the strangest dressed person the red carpet tonight; that honor will probably go to Lady Gaga, Miley Cyrus, or any number of celebrities that rarely fail to surprise. Still, the clown is strange enough to prompt some questions, namely, who's the man, woman, or creature behind the mask? Some ideas:

The French duo, up for five awards tonight, is known for using masks or costumes to hide their faces in public. Although they're supposedly wearing Star Wars helmets for the show, it's possible they had a change of heart and went with Scary Clown instead.

Dressing as a clown would be a tame move for Gaga, who generally goes for full-body, high-heeled looks at award shows. Still, you never know — the singer could've decided to go light on the crazy and go for the terrifying, instead.

Most likely, the singer, nominated for four awards, will show up in something a bit more demure tonight. Still, she's been posting Instagrams all week about possible clothing inspiration for the show; maybe she saw a Cirque Du Soleil show and got inspired?

All fans of Ellen know that the TV host loves to scare people. Seeing that today is DeGeneres' birthday, it wouldn't be too much of a stretch to think that she wanted to celebrate by frightening some choice Grammy nominees — say, her BFF Taylor Swift — as they walked the red carpet.

Apparently, though, it turns out that the clown is none other than Shawn Crahan, Slipknot co-founder and the man behind the stage name "Clown." (See above for a video showing what he really looks like.) Oh, well. It's not as exciting as if DeGeneres or one of the others had been under the mask; could you imagine how great that "surprise!" would've been? Still, at least one person is probably thrilled at the clown's appearance — Ryan Murphy, who we bet is getting some great ideas for American Horror Story: Season 3.