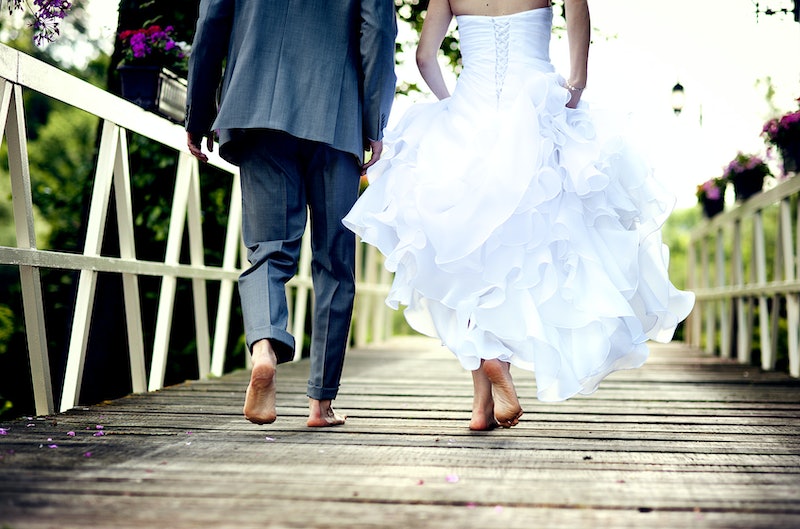 "I used to think a wedding was a simple affair. Boy and girl meet, they fall in love, he buys a ring, she buys a dress, they say 'I do.' I was wrong. That’s getting married. A wedding is an entirely different proposition."

That opening monologue from Father of the Bride is really quite brilliant, and quite accurate — a marriage is a legal union between two people in love. A wedding is a whole different beast. And with extravagant wedding trends and celebrity nuptials that make the Oscars look like a backyard BBQ, it may seem like dropping tens of thousands of dollars on the big day is practically required.

The average wedding in the U.S. costs about $26,000. That's a whole lot of money to spend on a big party that presumably only lasts one night. The school of thought seems to be that the more money involved, the more perfect the event, but the following stories will prove that theory wrong — all of these women spent less than $20,000 on their big day and all of them had weddings that were special and wonderful.

"We didn't want to spend tons on a wedding because so many people do and get into some serious debt," Svendsen says.

"It was really wonderful and so much fun because it was a team effort, a bonding experience for everyone involved. Strangers became friends and we all partied into the early morning," she says. "Most of our budget went into quality drink, food, and music — and we got married in the highlands of Scotland where food and drink are generally cheaper, and so is entertainment."

"We were both of the opinion that the wedding itself wasn't nearly as important as preparing for marriage. While I would have loved a fairy tale wedding with a horse drawn carriage, a princess dress, and the perfect venue, it was more important that our guests had fun," West says. "And that we left married."

"I've seen enough videos of 'fairy tale' weddings gone horribly wrong — imagine the bride's despair at the horse going berserk, or the swans pooping on the wedding cake, or Uncle John giving a drunken toast," West said. "The more things that need to go perfectly, the more stress goes along with it, and there's more potential for disappointment."

"I've never been the Cinderella type, but I knew that I wanted it to be beautiful and not the kind of wedding that we would be paying for through the next decade," Dunn says.

"The $5,000 was worth it, as most had never been in a penthouse and those floor-to-ceiling windows gave us views of Fifth Avenue and the Empire State Building that created a lifetime of memories."