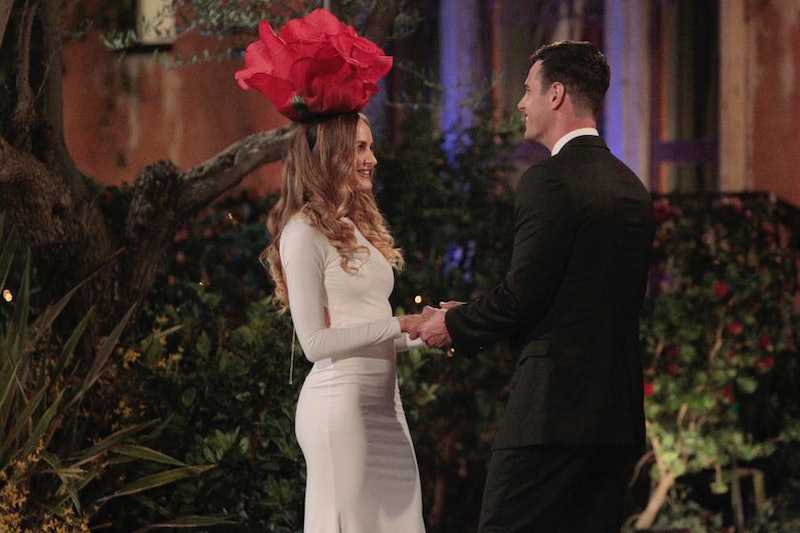 Half the fun of watching reality TV is kicking back and waiting for the contestant-bred hilarity to roll in. For example, The Bachelor's most awkward moments are always good for a re-watch. After all, the entire premise of the show — 25+ women competing for one man — practically dooms these contestants to Internet infamy, as far as stilted conversations and embarrassing faux pas go. I mean, limo arrivals night alone was full of weird entrances and moments. So far, Ben Higgins' Bachelor season has been super awkward, and there have only been three episodes!

Thus far, viewers have seen unicorn masks, drunken antics, a group date where Ben had to smell the women, and more from this season’s lineup of contestants. If you buy into the concept of true love on reality dating shows in spite of the many truly mortifying moments caught on camera, then I applaud you. But, for those of you who simply relish watching the truly embarrassing and hilarious moments go down, here’s a roundup of all the 14 most awkward moments from Ben Higgins’ season of The Bachelor so far. Really, that "so far" is key, because the season is just getting started and it's already brought these many moments of amusement.

1. That Time Breanne Tried To Break Bread With Ben

"Gluten is Satan" was taking it a little far.

2. That Time Mandi Asked Him To Pollinate Her Rose

Is there a less sexy euphemism to use to suggest that a guy sleep with you after knowing him for 30 seconds? (No.)

3. That Time Maegan Showed Up With A Horse

That's one way to make an entrance!

4. That Time Ben Was Totally Not Cool With Lace Stealing A Kiss

She obviously wanted it to be cute, but Ben was clearly so uncomfortable with that forced bit of affection.

5. That Time The Mean Girls Made Fun Of Samantha For Smelling Sour

6. That Time Olivia Talked About Her Supposed Cankles

Ben’s family friends just lost their lives, but sure… open up about your tragic cankles.

7. That Time Jubilee Told Ben That His Smiles Looked Fake

8. That Time The Entire Group Date Had To Watch Ben & Olivia

The definition of awkward is watching your potential boyfriend almost kiss another woman.

9. That Time The Women Tried To Gang Up On Jubilee

This was so middle school.

"He pushed off my leg" apparently equals a coded message. OK then...

11. That Time Rachel Tried To Play Through The Pain

More power to her.

12. That Time Kevin Hart Got Naked

Bobbing for apples is already hard enough without your teammate throwing lewd insults your way.

14. That Time Lace Quoted Her Tattoo In An Inspirational Moment

In short, Ben Higgins season of The Bachelor might not be the most entertaining one yet, but it's certainly the most likely to make you cringe with second-hand-embarrassment.