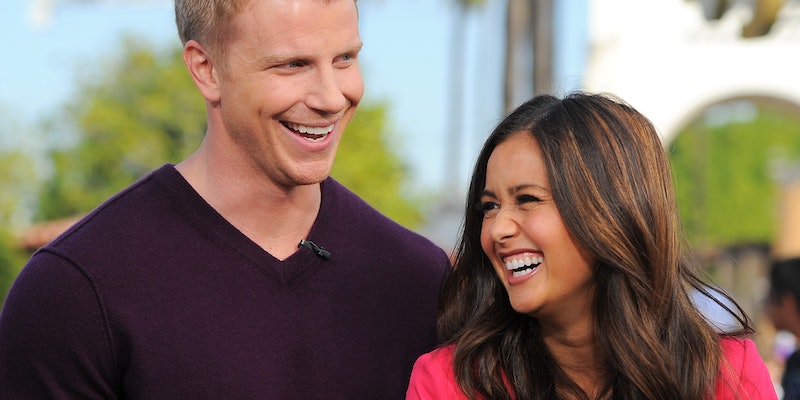 Hello! Welcome to the live-blog of The Bachelor: Sean and Catherine's Wedding. You could be watching the Grammys tonight (and joining us in assessing all the Grammy fashion highs and lows), or cable dramas, or any number of other options. But you're here! And we're so happy to be embracing this televisual experience as a WEIRD FAMILY.

So in addition to missing the the first...15 minutes of this wedding special, I also never saw an episode from Sean's Bachelor season. But not to worry -- I prepared myself for the festivities with Lia Beck's handy guide to Sean and Catherine's cutest moments, which you should check out, too. Education, as any contestant on either The Bachelor or The Bachelorette understands, is very important.

Those of you following from the comfort of your living room, or an airport bar: we'll be updating this blog at every commercial break, thoroughly dissecting the dress shopping, the cake sampling, the quiet but obvious psychological pressure lurking just beneath these next two hours of B-roll footage. New stuff first; first stuff last. And when we're done? We've got a wonderful keepsake memory, our own scrapbook to treasure forever. Let's get to it!

We were promised "interviews" with Bachelor alums after Sean and Catherine said their "I Do"s. So what do Ashley and JP and Trista and Ryan have to say about the latest additions to the married Bachelor family? "They looked great!" Where are Desiree and Chris when you need them? They would have at least prepared a poem in a bottle for the occasion.

With time running short, that's it for 'Sean and Catherine's Wedding'. BUT the show's gross, almost uniformly male producers couldn't end this thing without a camera trained on the "honeymoon suite" (a fun Pier One Imports craft sign noting as much hanging from the door) pulling away as porny music plays and animal sounds build, mixed with train whistles. SEX SEX SEX. I hate you, The Bachelor.

PS -- See you all tomorrow for the next episode of The Bachelor!

I considered transcribing everything they wrote, but all you want is the Clifs Notes version, right? Here's what you need to know:

Catherine's vows, paraphrased: “Sometimes I think I might explode with how much I love you.” “I promise to love you even after we can no longer remember each other’s names.”

Sean's vows, paraphrased: “We met in a pretty strange way, but it’s okay. God had a hand in it.” “I’m gonna make a lot of silly faces from here until the day we die.”

Nice sentiments all around. But then Dad's gotta talk about the rings. OF COURSE. Why do officiants always go on and on about the rings? We know this speech! Talk about how, like, the garter belt holds tremendous symbolic value. Deliver a sermon on “grown sexy” and what it means to build a marriage on that theme. Anything but the ring speech.

CONFETTI. It’s a nice touch. T-shirt cannon would be better, but obviously not in line with “grown sexy.”

And then these poor people, these beautiful people, have to endure a camera in their face as they try to share a sweet, post-wedding moment. I mean yes, we want to see it. But…give them a minute. Let them luxuriate in it, or at least have a quickie in the closest bathroom to the Biltmore veranda.

6:30ishpm: The (unending) moment of truth

Will Catherine trip and fall? Will her dress blow Sean’s mind? So many thoughts running through not only my head, but those of the collective Bachelor Nation.

DRESS FIRST IMPRESSIONS: Perhaps my opinion is colored by the dueling violins lending her walk some grown-sexy rhythm, but yeah, she looks great! I don’t know for sure if she’s truly pulled off “grown sexy” to the extent that she’s talked about for the last 90 minutes, but the effort is pretty on point.

And now two beautiful people, brought together by the magic of ABC’s casting department, now stand ready to marry each other and have SOME GODDAMN SEX. (After the ceremony, presumably.)

But first, Dad's got a WHOLE LOT TO SAY:

Sweet words, Dad, but at home we’re just waiting for the end of this speech. Too much! It feels like...I don't know, like we’re just stalling for time? Which is crazy for a wedding. You’d think this weren't just the normal union of two people, but a very carefully orchestrated television event intended to draw out every. Last. Moment for maximum dramatic impact. I don't know!

6:21pm: GETTING THIS WEDDING THING GOING

Finally, no more pre-wedding cake fights! It’s sort of wonderful. Just Sean and his dad hanging out on sta—I mean the altar waiting for Catherine to drag her sex-crazed self up there. But remember! We’ve got 56 members of the wedding party to get through before that can happen.

Rating the flower girl: I don’t know, she seems okay. A little skittish? I think Sean and Catherine could have spent less time picking out easy-access underwear and more time training the girl to smile. She’s really bringing down the mood of this GROWN-SEXY affair.

Catherine's time is closing in! “How do you feel?” her wedding planner asks her, not only the right person to be asking but of course also the best question to ask a bride mere minutes before she walks the…what look like 1000 yards from the end of this runway straight to the stage I MEAN ALTAR.

COMMERCIAL. ALL WEDDINGS HAVE THEM.

6:08pm: Chris Harrison, Sean and Catherine’s legal guardian, makes sure these kids are ready for marriage

“Are they really ready to take this leap together?” I SURE F**KING HOPE SO.

The Bachelor contract of course states that no marriage can be considered legal without a classic sitdown Chris Harrison grill sesh, so the excited couple meet with him on the grounds of the Biltmore Santa Barbara. My primary takeaway: Cathering has 12 BRIDESMAIDS. That's insane. Sean, understanding that he had to do something to stem the tide of insanity, found himself 9 groomsmen. There will be 21 people standing up there, not including the officiant (Dad), Sean and Catherine, or the sexual tension standing between them.

Anyway Chris cuts right to the sex of it all and asks about Sean's virginity pledge. Sean, to his credit, diffuses it as "just a small part of his faith." Fair enough! "Catherine, how do you deal with it?" "It doesn't affect me at all." Capillaries were actually bursting in Catherine eyes as she said this.

Chris assures us at home that he won't be creeping under the honeymoon suite bed tonight. GOOD TO KNOW, DUDE.

5:56pm: The elements are coming together

Flowers of course give Catherine another chance not only to say the words “grown sexy,” but to make that theme a REALITY. How the flower arrangement in front of them embodies this theme I can't be sure. They're grown, yes...but are they sexy? I don't know, maybe my eyes are just untrained.

Two minutes later Catherine is telling some cowboy/hair stylist that, again, she just wants "grown sexy." "He gets it." Does he?

But all of this is just child's play compared to the boudoir photos Catherine is preparing to shoot, her gift to Sean that hopefully will not make his heart explode before he can say "I do"/have sex. "I'm just so excited to be exposed to him," says Catherine, who wants us to know that she is HIS now. Loud and clear, babe!

Now I'm getting antsy for this ceremony. It's come to a 3-minute cake decorating sequence in which they just squeeze shapes and letters onto prefab white frosting cake? And then having a mini cute as shit food fight? Just get us to the altar already!

...Actually it is kind of cute; I feel bad to snark on what is clearly a loving relationship founded on mutual interests, or at least matching dispositions and values. They seem good together. I wish I were in a relationship right now.

Later they share a champagne toast, which is nice. BUT WAIT THERE’S MORE — a gift. He shows her the lingerie he bought. They giggle. JUST HAVE SEX OH MY GOD.

“I cannot wait to wear the lingerie Sean gave me. It’s like fancy icing for my body.” That is one way to describe clasp-y lingerie! “I’m going to be able to let out my grown sexy on him.” Okay now it's starting to sound like Steve Carell in The 40-Year-Old Virgin.

Catherine says “Grown Sexy” again, which she openly identities — without embarrassment — as the theme of the wedding. Drink! At the dress shop, Catherine tells the owner that she's trying to blow Sean's mind, not merely find a pretty dress. Exactly what degree of cleavage will satisfy both the requirements of her mother and the STATED WEDDING THEME?

Hard to say. All I can tell you as a heterosexual male without a single fashion impulse is that Catherine looks/is very pretty, and I enjoyed all of the dresses. She will pick one, and then we'll see her in it later!

Meanwhile Sean's fumbling through lingerie shopping, which he's never done before. “She’s a chesty woman.” Not many great options until he finds the "full-caged body suit" section and starts considering easy-acess bottoms. "How many days are left?" SEX SEX SEX DRINK.

Catherine meets with a wedding planner, who we must note is a wedding planner...TO THE STARS. “I’m just completely obsessed with Sean. But it’s not my wedding, it’s our wedding.” Somehow I doubt this will be Sean's wedding, especially when Catherine describes what she really wants. Two words: "grown sexy." CAN YOU TELL SHE REALLY WANTS TO HAVE SEX?!?

“The wedding day for me is so exciting because it’s my coming out party to be sexy, and grownup.” The wedding planner says no one has ever asked for that theme before. But maybe it will catch on now? Catherine wants BABIES MADE this night. “I have so much sex on my mind,” says the planner. Sex. Sex. Sex.

“What is ‘grown sexy’?” asks Sean. “Subtle touches of sex,” says Catherine, which I totally can visualize in a wedding theme.

GAME: Drink every time you can tell Sean or Catherine (particularly Catherine) REALLY wants sex. Are you dead yet?

Sean and Catherine visit his parents' in Texas. After some awkward small-talk that tells me, despite Catherine's assurances, these people definitely do not regularly talk on the phone, the couple ask Sean's dad to officiate at the wedding. He says "yes!" obviously.

Then Catherine talks a little bit about their upcoming wedding night, something I sense will be a recurring topic of conversation tonight. "He owns all of this." Feminism!