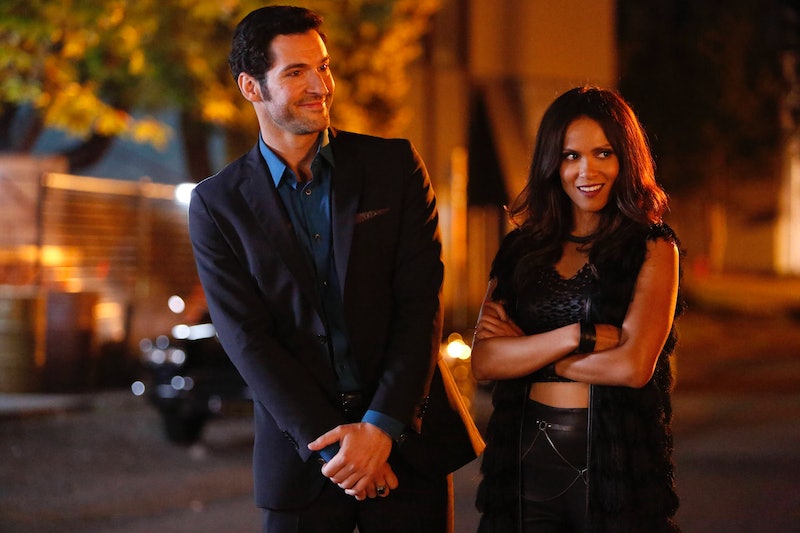 Making the protagonist of your procedural series the actual devil might seem like just a way to ensure you have the ultimate bad boy protagonist, but some people may not know that Lucifer is a loose DC comics adaptation. Even though there aren't any superpowers or capes, the original version of the Lucifer character dates back to Neil Gaiman's The Sandman, where the devil is a charming roguish kind of guy. And the character was spun off into his own comic series by Mike Carey, which tells the story of Lucifer, a fallen angel who should be ruling over Hell, but instead leaves his duty to wander the mortal world. That much of the series will be directly adapted from the comic. Everything else? Well, that's where it gets trickier.

The cast and crew have been very open about the looseness of their adaptation, and even cautioned passionate fans of the comic series. In an interview with Collider, star Tom Ellis says "it’s interesting — people that really want this to follow the graphic novel will be disappointed." Costar D.B. Woodside chimes in that the Lucifer writers are "kind of creating their own mythology and that’s become our Bible, per se." So that's pretty clear: the writers of this adaptation are clearly taking their own spin on the material. But since there's also some elements that they'll be pretty faithful to, I'm going to break it down: can you become a fan of this series if you're super into the comics? Well, read on to see some key similarities and differences between them.

The Setup And Setting Is The Same

In The Sandman, Lucifer abandons his post overseeing Hell, leaving the keys in the hands of the titular character, and in his spinoff he travels to Los Angeles and opens a piano bar. And... give or take a few details, the show will uphold the basic premise of Lucifer leaving his responsibilities to live in LA. The piano bar is now a nightclub, and the Sandman doesn't seem to be a character, but otherwise, the setup of the show is very similar.

And There Are Many Familiar Characters

In addition to Lucifer, the show will be adapting some of the supporting characters from the comics. There's Amenadiel, who is trying to convince Lucifer to return to his position in Hell, and Lucifer's loyal assistant Mazikeen.

The Show Has Added A Major Structural Change

Probably the biggest difference that the show has added is the framework of the series, which will have Lucifer helping the LAPD solve mysteries with the help of an original characters, Chloe Decker, while trying to avoid her hostile ex-husband, Dan Decker.

But Some Of The Same Themes Will Be Explored

Lucifer's boredom is what prompts him to leave his post, but the subtext of the comics is all about free will, and whether or not Lucifer's desire for rebellion should really be considered sinful. And while the procedural elements give the show more structure, it seems the serialized elements will tackle those themes.

However, No Capes On This Show

While I'm not opposed to a DC-DC crossover episode between Lucifer and Gotham, this series is not going to be a part of the DC television universe — unlike the comics, they've decided against making superheroes a part of Lucifer's world.

It's Shooting For A Sense Of Humor

The show doesn't look like it's going to have the typical tone of a police procedural, and that's something that should maybe tie it back a little to the comic, which can be irreverent at times.

But, Overall, It's A Very Different Story

The final verdict: While there are some similarities between the comic books and the TV show, each Lucifer is its own totally different beast. And in order to enjoy the FOX series, it would help to leave those expectations from the comics at the door.

More like this
'Bridgerton' S3 Teases Exciting Social Season For Penelope Featherington
By Bustle
Everything To Know About The 'Daisy Jones & The Six' TV Series
By Maxine Harrison
'Broadchurch' and 'I Hate Suzie' Casts Join Forces For Gritty BBC Drama
By Bustle UK
The 'Firefly Lane' Book Ending Teases Way More Tears To Come In 2023
By K.W. Colyard
Get Even More From Bustle — Sign Up For The Newsletter