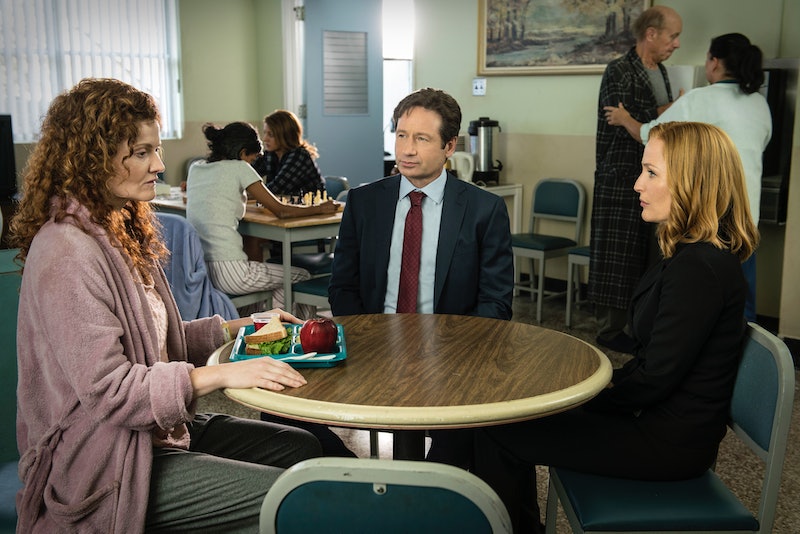 Now that the X-Files unit has been reopened, it's time for Mulder and Scully to hit the ground running and get back to work. For them, a typical day at the office consists of investigating a sinister conspiracy, chasing down people who are potentially human-alien hybrids, and watching a guy's eyes pop right out of their sockets — a sight that Mulder assures Skinner is something he can never unsee. (Same, Mulder. Same.) In the Jan. 25 X-Files episode, "Founder's Mutation," the agents are called to the scene of Dr. Sanjay's apparent suicide — but it leads them to the discovery of another doctor who has a seriously creepy agenda that ties back into the revival's overarching themes.

Before his death, Sanjay had written "Founder's Mutation" on his hand — which is what Dr. Augustus Goldman's employees call him. As it turns out, Goldman has a sinister agenda and he has deep ties to the Department of Defense. During a search of Sanjay's apartment, Mulder and Scully discover medical records of children with grave, serious abnormalities. They pay a visit to a maternity ward funded by Goldman, where they meet Agnes, a frightened young woman who's desperate to get out of the hospital. Agnes tells Mulder and Scully that she has the same story as all the other women on the unit — they're pregnant with "sick" children who will presumably be taken away from them once they give birth.

Mulder and Scully, who can certainly pack a lot of investigating into a day, track down the elusive Goldman himself — and they get a look at the children he's supposedly treating. The patients display a variety of genetic abnormalities, and when the agents question one boy, he tells them that he's been in the ward "forever" and he "doesn't have parents." Scully asks Goldman if the use of alien DNA is the reason the Department of Defense is funding his research — he tells her he thought she was the rational one, but fails to answer her question before kicking both agents out.

It's all mighty suspicious, especially when Agnes turns up dead later that night and Scully's autopsy determines that her baby was surgically removed from her body. Mulder speculates that the baby could have survived if it was an alien-human hybrid — and, a meeting with Goldman's wife, Jackie, lends credence to his theory that creating hybrids is exactly what Goldman is up to.

The first embryo Goldman experimented on was his own daughter, Molly. Jackie tells the agents she realized he'd "done something" to the embryo when Molly exhibited supernatural abilities, like the capability to breathe underwater. She was nine months pregnant at the time and fled the home, but ended up in a car accident. Jackie cut open her stomach to "let the baby out," then passed out from blood loss, woke up in the hospital, and never saw him again. Mulder and Scully determine that the baby is now 17-year-old Kyle Gilligan, the janitor on duty the night of Sanjay's death. They track him down and Kyle expresses that all he wants is to be reunited with his sister. Mulder and Scully take him to Goldman's ward, where Molly is in a sealed room. The siblings communicate telepathically, shatter all the glass separating them (and then some), and kill Goldman before knocking Mulder and Scully unconscious.

When the episode concludes, Kyle and Molly have escaped and the Department of Defense has taken over the facility. But, Mulder has one piece of evidence left — a vial of Kyle's blood, which Scully will presumably test for alien DNA. Although Goldman is now out of the picture, it's clear that the theme of this season is how and why the government is creating alien-human hybrids — and how many individuals are part of the conspiracy. This fits into the arc about Mulder and Scully's son, whose origins are mysterious. They've got a lot to tackle in six episodes, both personally and professionally, but "Founder's Mutation" indicates we're in for a great season. The premiere was all about setting up the reopening of the X-Files — now that that's taken care of, Mulder and Scully can get back to doing what they do best. It's a relief (but not a surprise) to see that they're just as amazing in 2016 as they were when the show concluded in 2002.