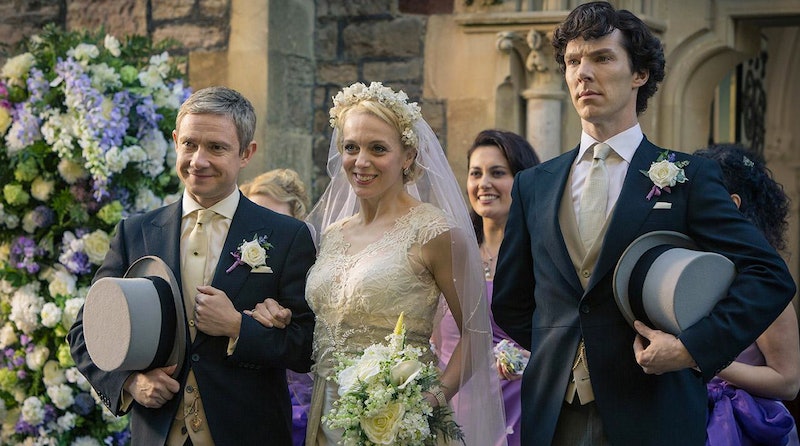 "John Watson, you keep me right." That's not how Sherlock's second episode of Season 3 opened, nor how it closed. It was spoken somewhere in the middle, in the flurry a whole lot of other things. But it is a phrase that you will find tattooed on the hearts of countless Sherlock fans for whom "The Sign Of Three" unfolded like a fever dream expertly crafted from Sir Arthur Conan Doyle.

In honor of the fandom, here are some of the moments from this episode that seemed to basically be pulled out of the realms of fanfiction:

This episode seems to stand — probably moreso than the ones that bookend it — as a sort of thesis statement to this season of Sherlock: Still quick-talking and quick-witted, yes, but more than that this show is being driven by emotion, and this season's emotionality is one of its hallmarks.

SHERLOCK: John, I am a ridiculous man ... redeemed only by the warmth and constancy of your friendship. But, as I’m apparently your best friend, I cannot congratulate you on your choice of companion... Actually, now I can.(John and Mary smile.)SHERLOCK: Mary, when I say you deserve this man, it is the highest compliment of which I am capable. John, you have endured war, and injury, and tragic loss ... (leans closer to John) ... so sorry again about that last one ... (straightens up) ... so know this: today you sit between the woman you have made your wife and the man you have saved — in short, the two people who love you most in all this world. And I know I speak for Mary as well when I say we will never let you down, and we have a lifetime ahead to prove that.

Sherlock's vow to John, Mary, and their (surprise!) unborn baby during this episode is that "whatever it takes, whatever happens, I will always be there... for all three of you... " Next episode, that vow will be challenged, and most likely cemented. Are you ready for Season 3 to be over already?