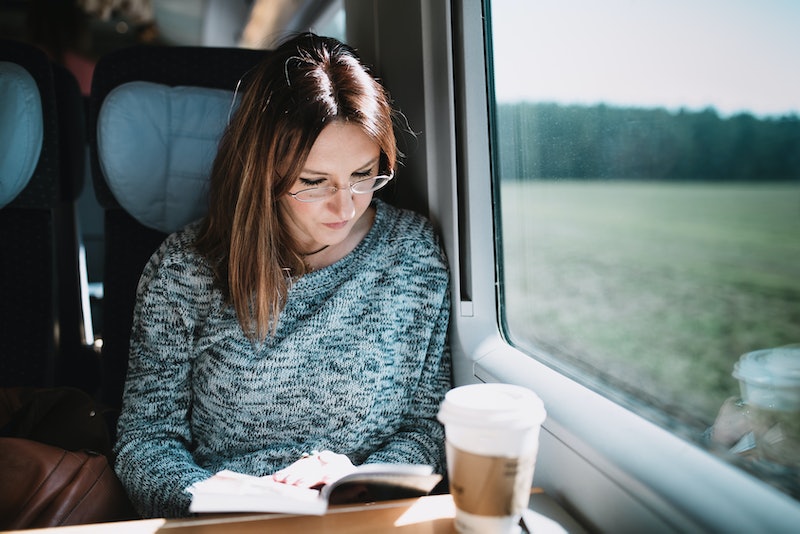 There’s just something totally transforming about a really well-told true story. Not only are nonfiction titles great for teaching you something new or introducing you to a new place you’ve never heard of or traveled to before, but they also introduce you to new people — people who have changed the world, invented something cool, completed some totally bad-ass endeavor, or just dived really deep into their own journey of personal transformation. All inspiration-worthy feats, in my opinion. Plus, since the stories that fill nonfiction books are true, that means their characters are true too — existing in the very same world you do, with e-mail addresses, where you can write them thanking them for sharing their transforming tale and inquiring as to whether or not they might be in the market for a new best friend, for instance. I don’t know about you, but Hermione Granger has yet to respond to a single one of my e-mails.

Are you willing to love nonfiction as much as I do? Then check out these 12 nonfiction books that every woman should read.

At 30 years old Jessa Crispin whittled down her life into two suitcases and headed for Berlin, with no specific plan. This impromptu adventure quickly turned into a journey across Europe — to places of significant literary merit, where writers past had ventured in order to reinvigorate their spirits, revitalize their creative lives, and break free of their hometowns. The Dead Ladies Project is one woman’s on-the-road journey, as she explores the appeal of escape and personal reinvention, through the eyes of a writer.

If you’ve already read Gloria Steinem’s latest girl-power tome, My Life On the Road , then it’s definitely time to revisit some of her earlier contributions to bookish badassery. Outrageous Acts and Everyday Rebellions is a collection of Steinem’s essays from her first 30 years of women’s liberation work — from her thoughts on periods and birth control to mothering and Playboy, Steinem covers it all.

3. I'm With the Band: Confessions of a Groupie by Pamela Des Barres

From a comfortable middle-class life in Reseda, California to becoming one of the most legendary groupies to grace the rock ‘n roll scene, Pamela Des Barres had a front-row seat for some of the most iconic concerts in music history — and spent all kinds of time following the musicians who performed them. I'm With the Band: Confessions of a Groupie tells the story of Des Barres totally enviable lifetime spent among musical legends.

4. White Walls: A Memoir About Motherhood, Daughterhood, and the Mess In Between by Judy Batalion

If you’re a woman who’s contemplating (or considering contemplating) motherhood, this just-released memoir is definitely a must-read. From a childhood spent in the house of her hoarding mother, memoirist Judy Batalion constructed an adulthood filled with clean lines, organized shelves, and white walls. Until she became a mother herself, that is, and feared her long-awaited life of order would fly right out the window. White Walls: A Memoir About Motherhood, Daughterhood, and the Mess In Between tells a story of mother-daughter relationships in a way that is fresh, honest, sad, and funny all at the same time.

5. Mary McGrory: The First Queen of Journalism by John Norris

For 50 years syndicated columnist Mary McGrory reported on politics; everything from the McCarthy hearings to Watergate to September 11th. As one of the first syndicated female journalists, she paved the way for future female reporters like Christiane Amanpour, Maureen Dowd, Joan Didion, and Gail Collins. Mary McGrory: The First Queen of Journalism takes readers not only through McGrory’s reportage, but also behind the scenes where she spent most of her early career partying hard and working harder through the boys’ club that was journalism back then.

6. We Should All Be Feminists by Chimamanda Ngozi Adichie

If you’re not totally obsessed with writer Chimamanda Ngozi Adichie yet, it’s definitely time to jump on that bandwagon. Exploring what feminism means today — for diverse women, with diverse experiences, living all over the world — We Should All Be Feminists takes a critical look at sexual politics, the marginalization of women, the way women themselves understand the word "feminism," and why dis-empowering women harms both women and men.

7. How We Live Now: Redefining Home and Family in the 21st Century by Bella DePaulo

From multi-generational homes to intentional communities made up of friends to married couples who live in separate homes and are more in love than ever, Bella DePaulo’s How We Live Now: Redefining Home and Family in the 21st Century looks at the evolution of the American family and it’s chosen living arrangements. Not only will it prove that you’re not, in fact, the only person in this world who thinks renting adjoining apartments ‘til death do you part is totally the way to go, this book will totally help you answer all those pesky questions your grandmother asks about your living situation every time she visits.

8. She's Not There: A Life in Two Genders by Jennifer Finney Boylan

If you weren’t familiar with Jennifer Finney Boylan before you met her on I Am Cait, you probably are now. The transgender professor and writer shares her own experiences of struggle and joy as she learned to share her true self with those around her. She’s Not There: A Life in Two Genders , not only explores Boylan’s personal experience, but examines the complex boundaries of being ‘male’ and ‘female’ and what it would mean for the world to understand gender norms differently.

9. Men Explain Things to Me by Rebecca Solnit

I’m not sure who precisely invented the term "mansplaining" (although Rebecca Solint has often been given credit) but serious kudos to her, because it’s a term the English language was sorely lacking — especially since the practice of mansplaining has existed since basically forever. In Men Explain Things to Me Solnit describes the trouble with conversations between men and women: that being that men think they know all the things, and are responsible for telling them to the women. This book, in addition to being equal parts hilarious and frustrating, also takes a serious exploration into the life-or-death severity that the act of silencing women can really have.

10. The Heart of a Woman by Maya Angelou

When Maya Angelou left California for New York, she was quickly thrown into a world of Harlem-based artists and writers, the Civil Rights Movement, and encounters with the likes of Billie Holiday and Malcolm X. Simultaneously, The Heart of a Woman is a memoir of womanhood and motherhood, as Angelou raises her young son in the big city, against the backdrop of a rapidly changing America. This memoir tells the story of one artist, activist, and mother who somehow managed to do it all at a time when the world expected the exact opposite from her.

11. Living My Life by Emma Goldman

From Russia to the Lower East Side of Manhattan, Emma Goldman certainly had a life. Her autobiography, Living My Life , tells the story of that life — Goldman’s anarchistic political bend and her career as an activist-journalist, to her advocacy for birth control, women’s liberation, and free love and her subsequent imprisonment for allegedly inciting a riot, you’ll have a hard time finding some act of rebellion this no-holds-barred feminist didn’t participate in during her lifetime.

Fran Lebowitz has the fantastic ability to look at life and those around her as, say, an alien being from a vastly more advanced civilization than ours would. Filled with humor, wit, irony, and that complete “can-you-believe-these-people?” attitude Lebowitz is known for, The Fran Lebowitz Reader is a collection of Lebowitz’s best essays, pulled from her previous two collections, Metropolitan Life and Social Studies . You’ll walk away from this collection viewing the world with a little more humor and a lot more sass. And let's face it: Who couldn't use more of both?

More like this
Where Is John Leonard Now After Suing Pepsi For A Harrier Jet?
By Brad Witter
The 'Lady Chatterley's Lover' Book Leaves Us With A Troubling Question
By Catharina Cheung
Lib & Will’s Romance In 'The Wonder' Is Very Different From The Book
By Sam Ramsden
Taffy Brodesser-Akner Can Write Anywhere — Even The Bathroom At Bloomingdale’s
By Samantha Leach
Get Even More From Bustle — Sign Up For The Newsletter